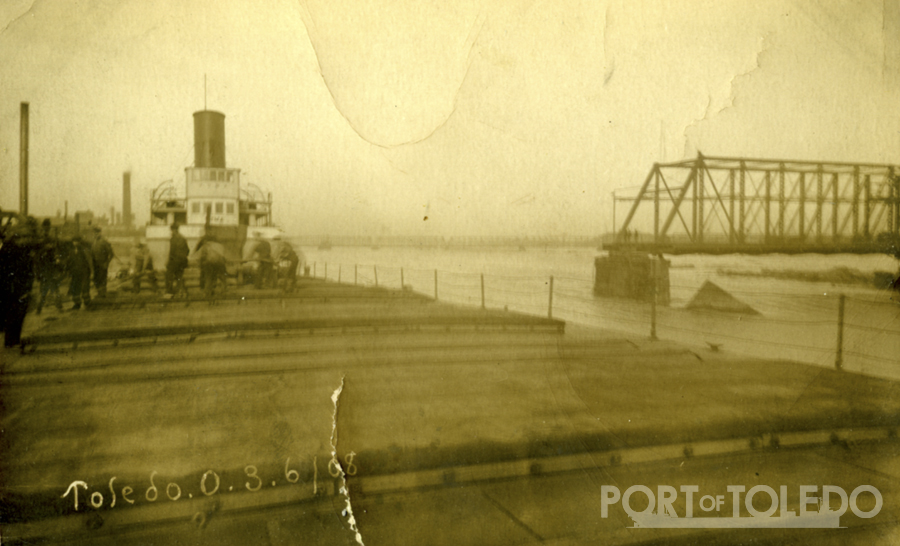 On March 6, 1908, ice on the Maumee River caused the Yuma to come loose from its moorings and strike the Cherry Street Bridge, eventually causing an entire span to fall into the river. Click here to see the damage done to the Yuma and to learn more about the accident. The image above, from the opposite perspective shows the damage to the Cherry Street Bridge caused by the accident. The span closest to Downtown Toledo collapsed into the river.

In 1908, the Cherry Street Bridge was the primary connection between Downtown Toledo and East Toledo. It was the conduit for pedestrian travel, streetcars and even electrical lines. The electrical lines were snapped by the accident and East Toledo lost power. On March 7, power was restored when electric company crews used a device supplied by the fire department to shoot an electrical line across the broken span to resupply power. By March 14, crews had built a temporary replacement span and even reattached streetcar rails to resume street car service to East Toledo.

We want to hear from you! Leave a comment below to tell us about your memories of a time when a ship caused a power outage.