The Col. James M. Schoonmaker was built at the Great Lakes Engineering Works of Ecorse, Michigan. She was christened by Gretchen Schoonmaker daughter of the ship’s namesake and launched on July 1, 1911. The Schoonmaker was unsurpassed in both size and elegance.  On her maiden trip, she carried 12,650 net tons of coal from Toledo, Ohio to Sheboygan, Wisconsin. The ship held the title of “Queen of the Lakes” as the largest ship operating on the Great Lakes until April 14, 1914.

The Col. James M. Schoonmaker served as the flagship of the Shenango Furnace Company. She broke many cargo records for iron ore, grain and coal in her first year. In 1969 the Shenango Furnace Company divested its maritime assets and sold the ship to Republic Steel Corporation, who rechristened it the Willis B. Boyer after their president. Three years later they sold the ship to the Cleveland-Cliffs Iron Company and the ship was painted in Cleveland-Cliffs’ colors. The ship then continued her career on the lakes for another seven years before being laid up in 1980 during the industry downturn.

In 1987 the city of Toledo purchased the ship to become a museum ship tourist attraction. She sat as the centerpiece of the International Park for several years. In 2011 on the 100th anniversary to the exact minute, she was rechristened back to her original name Col. James M. Schoonmaker by Treecie Schoonmaker, the grand daughter-in-law of Col. Schoonmaker.

The newly rechristened ship was then moved one last time to her permanent berth at the site of the National Museum of the Great Lakes on the banks of the Maumee River in Toledo. The ship is available for self-guided tours as part of the museum from May through October.

You can take a virtual tour of the Col. James M. Schoonmaker by clicking here.

Self-guided tours of the Schoonmaker are always available when the boat is open.  At this time we are offering no  guided tours due to group size restrictions. Please use our smart phone app for all tours! 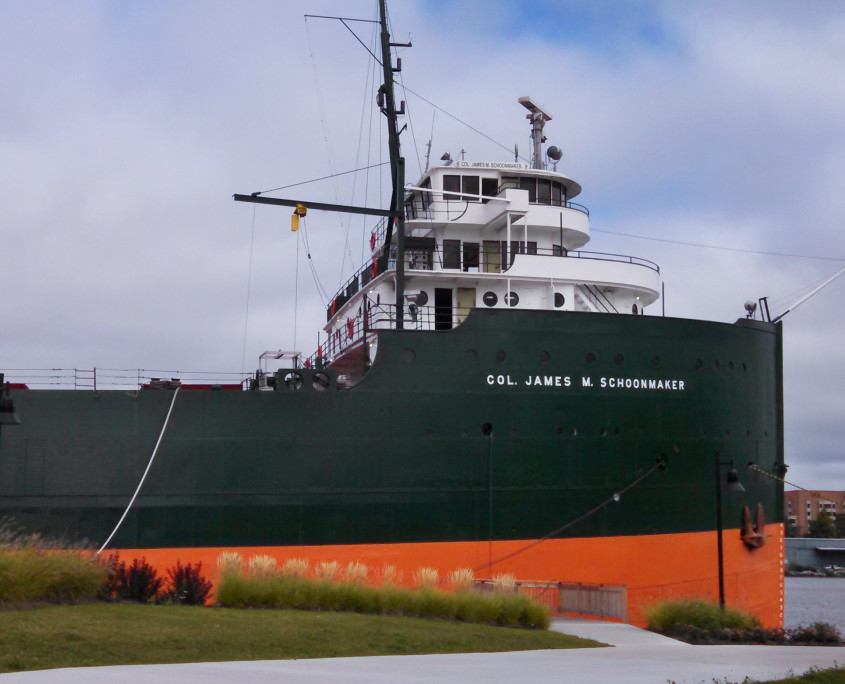 We have just added, in 2018, a mobile tour app.  This exciting app allows you to have a virtual tour guide as you move around the Col. James M. Schoonmaker museum ship.  With it, we share information about the ship, men who sailed on her, duties aboard, and fun facts.  It is a great way to get more out of your visit to NMGL and the Schoonmaker.

You can go ahead and download the app with Google or Apple iOS.