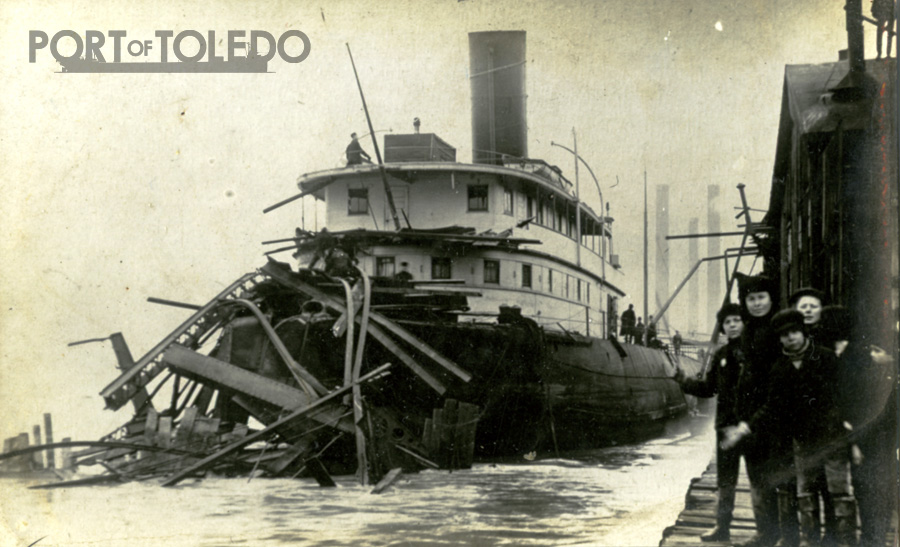 The above images shows the propeller Yuma, after it collided with the Cherry Street Bridge in Toledo on March 6, 1908. We believe this image is taken near the bridge on the downtown side of the Maumee River looking south-southeast.

A note in the 1909 Annual Report of the Steamboat-Inspection Service in the Reports of the Department of Commerce and Labor said:
“March 6 – About 12:30 p.m., during a movement of the ice gorge, the steamer Yuma, 2,194 gross tonnage, which was moored at the docks in the Maumee River at Toledo, Ohio, broke her fastenings, causing her to collide with the Cherry Street Bridge, throwing one span of the bridge about 100 feet out of line. About 2 hours later, a further movement of the gorge caused the steamer to shift still farther and the span fell into the river. Harbormaster John A. Page was carried down with the bridge, but was rescued soon after. He is reported as having been seriously injured. A spectator was struck by one of the hawsers when it parted, and he died later in the hospital. Another sustained a broken leg. It has since been ascertained that the damage to the steamer Yuma was $4,883. Estimated damage to bridge, $30,000.”