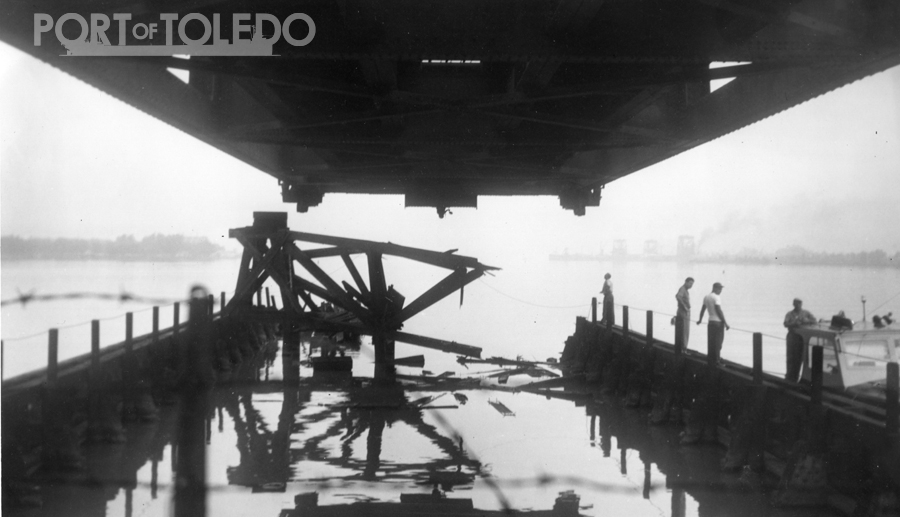 A Bridge struck by a freighter!  What a sight!  What a sound!  Surprisingly, this is not a terribly uncommon occurrence in rivers all around the Great Lakes.  History books, archives, and insurance files are filled with events showing damage to bridges as well as vessels when something had gone awry during navigation up or down a river.  This isn’t even the first instance of this happening in this exhibit! (See the Cherry Street Bridge after it had been damaged by the Yuma in 1908).  This photo, taken underneath the bridge span, shows some of the damage at water level to the Toledo Terminal Lower River Bridge.  (Learn more about this swing bridge here.)

Thunder Bay Quarries, the vessel that hit the bridge, was built in 1907 and originally named John J. Boland.  This 480 foot freighter was converted into a self unloader in 1939 when the vessel was renamed. In 1970, the vessel, then called Harris N. Snyder, struck and damaged itself on a breakwater in Conneaut, Ohio.  The boat was eventually scrapped in 1974.

We want to hear from you! Leave a comment below to tell us about your memories of boats hitting bridges along the Maumee.