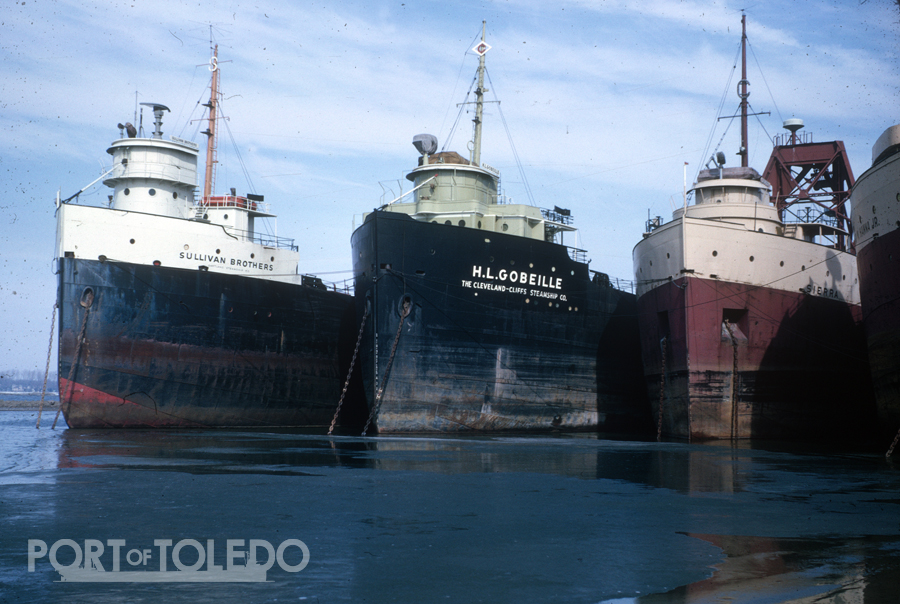 The above image shows four lake freighters laid up in an area known as “the Frog Pond,” in Toledo in early 1964. The origins of the name aren’t known, but the Frog Pond was an area where many freighters were kept in long term layup over the years. Some of these freighters went back into service when their fleets had enough business to use them and others were eventually sent to be scrapped. The Frog Pond was sometimes used for temporary layups and winter layups as well as overflow dock space for active freighters. While all of the pictured freighters were eventually sold for scrap, only one of them was scrapped in the year the photo was taken.

The Sullivan Brothers, originally the Joseph Wood, was built in 1910 in Lorain, OH. The vessel was renamed in 1957 as the Sullivan Brothers and was scrapped in 1967 after grounding and being deemed a total loss because of the damage to the hull.

The H. L. Gobeille was built as the William G. Mather in 1905, was renamed as the J.H. Sheadle in 1925 and renamed again as the H.L Gobeille in 1955. In 1964 her ownership transferred to the Gartland Steamship Company who had her converted to a self-unloader and renamed her as the Nicolet. The vessel was sold for scrap in 1996.

The Sierra was built in 1906 by the Toledo Shipbuilding Co. and was converted to a self-unloader in 1929. The Sierra was scrapped in June, later in the same year that this photograph was taken.

The Howard M. Hanna Jr. was built in 1914 by American Shipbuilding for the Hanna Transit Company. The vessel became part of Columbia Steamship Co. in 1921 and was sold for scrap in 1968.

We want to hear from you! Leave a comment below to tell us about your memories connected to the Toledo Frog Pond.