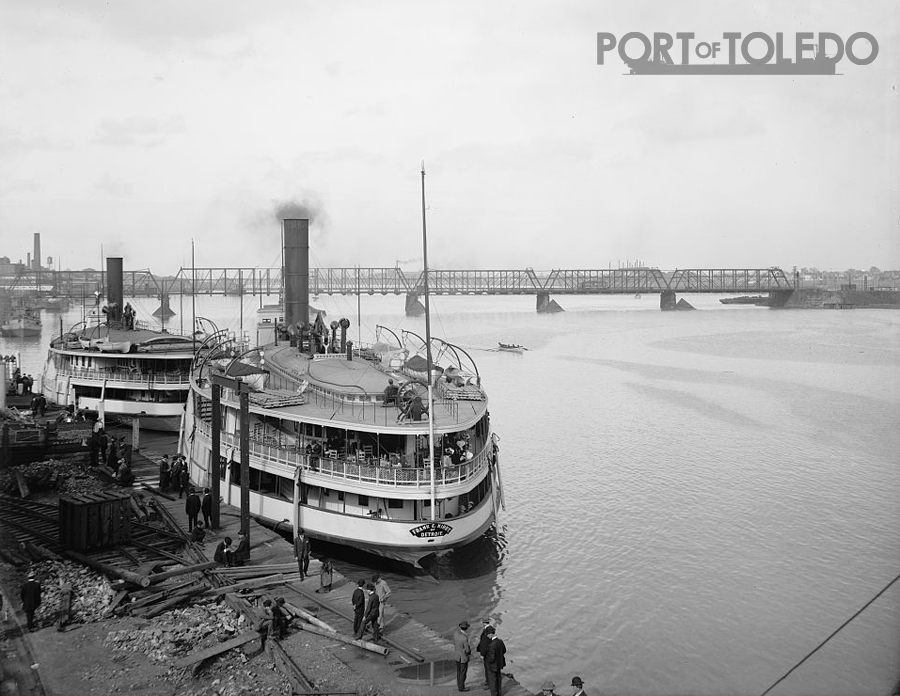 Toledo was a popular port for excursion vessels (also known as dayboats) like the two vessels shown here, likely between 1900-1914. Click here to learn more about another excursion boat, the Greyhound. The vessels are the Arrow, built in 1895, and the Frank E. Kirby, built in 1890, both at the Detroit Dry Dock Company in Wyandotte, Michigan. The Arrow typically operated between Sandusky and the Lake Erie Islands. The Kirby typically sailed between Detroit, Sandusky and Put-in-Bay. As Toledo was not the usual port for either vessel, they may have been chartered for a special trip.

The Frank E. Kirby was built by and named for the renowned naval architect Frank E. Kirby, who designed over 100 vessels during his career. It was known for its speed and challenged several other excursion boats to races over the years. In 1891 the owners of the Kirby deposited a $300 wager with the Sandusky Register as a challenge to the newly built City of Toledo (built by the Craig Ship Building Company in Toledo).  It’s not clear that the City of Toledo took up the challenge, but the Kirby did race the Columbia in 1902 and lost by 200 feet.

We want to hear from you! Leave a comment below to tell us about your memories connected to day tripping out of Toledo.