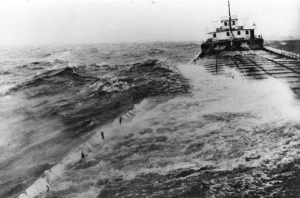 The TRUESDALE taking water over the deck on Lake Erie

From the days of the early fur traders down to the present time, the Great Lakes and their effect on the weather has had a definite bearing on the growth of industries, the development of recreational facilities, the water supply for growing cities and communities, and a natural environment for a reasonably large segment of agriculture.

In 1870, the United States Congress passed a statute creating a national weather service. Embodied in that original statute was recognition of the importance of the effects of weather on commerce on the Great Lakes by the words, “For giving notice on the northern lakes and on the seacoast, by magnetic telegraph and marine signals, of the approach and force of storms.”

The existing maritime commerce on the Great Lakes drew first attention of the newly-created weather service. Of the 25 stations originally established, a large proportion of them were at Great Lakes’ ports. The first warning message issued by the United States Weather Bureau was early in November 1870, for a storm on the Great Lakes. Gradually, display stations containing visual displays of storm warnings were established along the shores, displaying flags by day and lights by night, to warn the sailing vessels of approaching storms.

The invention of radio-telegraph and later, radio-telephone, improved communications with boats at sea so that up-to-the-minute warnings could be received even if out of sight of a visual display. Modern freighters on the Lakes depend entirely on two-way radiotelephone for their weather advices but the visual displays are now playing an important part in the safe conduct of fishing fleets and the rapidly increasing number of pleasure craft.

The present weather service to the Great Lakes consists of routine forecasts issued every six hours during the navigation season, and broadcast by a number of marine radio stations. In addition, a Great Lakes Weather Bulletin comprised of a number of vessel weather reports, as well as a large number of reports from shore installations, is broadcast each six hours. Many AM-FM stations throughout the Lakes also broadcast the lake forecasts, particularly during the small boat season.

Warnings, issued by the Weather Bureau when necessary, are given prompt and widespread dissemination by marine radio, commercial radio, Coast Guard and display stations. The weather information is used by Great Lakes captains to choose the best and safest routes during storm conditions, or possibly to seek protective shelter in the lee of some island or lake shore. Perhaps no one but the farmer pays such close attention as the mariner to the weather and how it will affect his day-to-day operation. 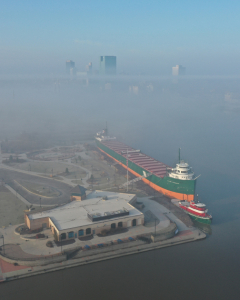 The mariner is concerned in the early spring with the ice conditions and the probable weather that might permit blocked harbors and passages to open. Fog, especially in the spring when large masses of warm, moist air from the south sweep northward over the Lakes, presents a hazard to navigation, and at times brings movement of vessels to a complete halt. Within the last ten years many of the larger ships have been equipped with radar to permit them to proceed safely even under fairly heavy fog conditions. Throughout the summer, thundersqualls with wind gusts sometimes exceeding 60 miles per hour are encountered. These sudden squalls are the greatest danger to small fishing and pleasure craft, thousands of which are operating on the Lakes during the summer months. In the fall, Great Lakes marine commerce encounters its worst storms. Large storms covering hundreds of miles move eastward or north­eastward across the Great Lakes. The storms of November 27, 1905, and November 8 to 11, 1913, are well-remembered by many still sailing the Lakes. Of more recent date, the Armistice Day storm of 1940 resulted in severe loss of lives and property over the three Upper Lakes.

Improvements in construction and sturdiness of boats, increased and improved weather services by both the United States and Canada, and modern navigational aids, have all combined to outwit the disastrous meteorological effects of weather on lake shipping. Progress continues as research gradually builds up our knowledge of the many complex factors operating in the atmosphere that work to make up our weather. New equipment is being developed to extend the area of observations formerly limited to permanent observation points. Storm detection radar is the latest aid now being used to track weather. An installation has just been completed at Cleveland, Ohio, that has a range of approximately 200 miles. The skies over all of Lake Erie can be scanned for echoes. Echoes from meteorological phenomena can be evaluated in terms of area coverage; intensity; whether storm is developing or dissipating; direction and distance from station; direction and speed of movement, and altitude of the top of the storm. This information can be an invaluable aid in prompt issuance of small craft warnings during thunderstorm or line squall conditions.

The location of the largest inland seas in the world, in the north temperate zone, and surrounded by a vast continental area, gives its day-to­day weather a complex character. Although the climate is considered to be continental, it is less so than the large area in the same latitudes west­ward to the Rockies. It has no rainy or dry season as such, and precipitation is well distributed throughout the year, although particular years will vary considerably from average. Floods for the most part are minor, as compared to those experienced in the larger river basins of the country.

In general, the Lakes modify temperature extremes over what it would otherwise be. The winters are less cold and the summers less warm, with the greatest effect at the shores of the Lakes, and diminishing effects progressively, as you move inland from the Lakes. Although the cold waters of the Lakes delay spring over wide areas, fruit growers and horticulturists consider it a blessing, as the early growth of buds is delayed until the frost season is well over. Again, they count their blessings in the fall, as the warm waters of the Lakes ward off frost and lengthen the growing season beyond that of more inland areas. While the Lakes without doubt, affect the precipitation pattern of a much larger area, these effects are not as well defined as the temperature effects. However, local effects in the form of heavy snows, usually over very small areas, and particularly on the lee side of any of the Lakes, are pronounced examples of precipitation caused by the Great Lakes.

In any discussion of weather and climate, the question, “Is climate changing,” invariably arises. The answer is “yes.” Geologists can trace down through the ages a succession of climatic changes either towards warmer or colder for millions of years. However, most people are not concerned with the climatic change requiring thousands of years, but with the changes that are happening now. Here, unfortunately, the meteorologist encounters a number of factors that are not meteorological. Systematic weather observations in this country go back less than 100 years, a few perhaps longer.  A study of these records do show small changes, but it is difficult to prove that they are wholly meteorological. The change over the years in the exposure of the instruments from a purely rural exposure, to one surrounded by a metropolitan area, can appreciably affect the records. The removal of trees and vegetation, part of nature’s air conditioning plant, and the substitution of factories, houses, thousands of miles of roads and driveways, are but a part of the changes in climate that are purely man-made. The heat given off by millions of automobiles, industrial gases, better-heated homes, are but a few of the factors that man is contributing to changing climate. That the question of climate change is not new to this generation is attested by the following, taken from the Niles National Register published in Baltimore, Maryland, August 10, 1816:

“With regard to our own country it has been observed, that since 1812, the seasons have been very unlike what they had formerly been. We do not pretend to conjecture as to the causes of this change, our present business is to enquire what change has taken place, its effects and probable consequences of its continuance.”

About the Author: Mr . Burke is Meteorologist in Charge of the Weather Bureau Airport Station, at Cleveland Hopkins Airport, Cleveland, Ohio.

About the Author: John Borman was born and raised on Put-in-Bay and knew Captain Parker all his life. John even helped raise three of Captain Parker’s grandchildren and wrote, “I am very proud of them!” Borman has many fond memories of riding alongside Parker in his wheelhouse.