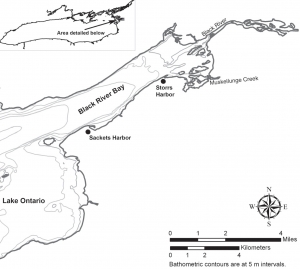 The naval War of 1812 on Lake Ontario ended not with a bang but a whimper. There were no definitive battles and when the news that the war was over reached Lake Ontario in February 1815, both the British and American fleets returned to their harbors largely intact. For the Americans, this was Sackets Harbor near where the Black River Bay enters Lake Ontario (Figure 1). The surplus American vessels, including the merchant ships taken into service early in the war, were sold off in May of that year, but the remainder of the fleet was laid up, and in some cases boarded over, in the protected waters behind Sackets Harbor’s Navy Point (Figure 2) (Malcomson 1998).  The laid up American   ships   included   Sylph, Pike, Mohawk, Jefferson, Superior, Madison, Oneida and Jones (the ships New Orleans and Chippewa remained on the stocks at the end of the war). At the same time, fifteen 75-foot armed barges were also laid up at Storrs Harbor farther up the bay. Near the end of the war, the U.S. had developed a second ship- yard at Storrs Harbor, approximately 2.5 miles (4 km) northeast of Sackets Harbor, to build Chippewa, which was never completed (Gibson 2012) (Figure 3). 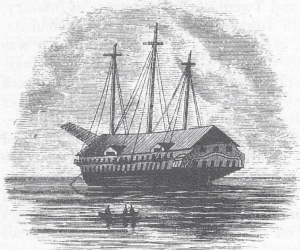 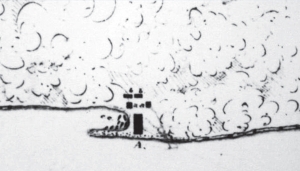 Figure 3. Armed barges moored at Storrs Harbor. The barges are the ovals within the bay, while the rectangles represent buildings at the Chippewa shipyard (Anonymous 1816).

Among these ships, Mohawk and the 15 armed barges are of particular interest to this study. The 42-gun frigate Mohawk, launched in June 1814, was the largest of the operational U.S. lake fleet; at approximately 150 feet (46 m) long and 1200 tons, it was smaller than New Orleans and Chippewa but these vessels were never launched and were broken-up or burned after the war (Malcomson 1998). As one of the last vessels launched during the war, this ship commanded by Jacob Jones, saw only minimal use; however, a comparison between this vessel and archaeologically recorded vessels of the British lake fleet, such as HMS Kingston (1294 tons) (Moore 2006), would generate valuable information on how both nations approached shipbuilding on the Great Lakes during a period that is not well understood in North American inland naval architecture (Cain 1983; Dunnavent 1999; Thiesen 2006).

Built at approximately the same time as Mohawk, the 15-armed barges, each designed to carry 100 men and powered by 40 oars, were constructed at Sackets Harbor during the final shipbuilding rush of 1814. These 75-foot (23 m) long vessels were popular in the Jeffersonian Navy and were built in several theaters during the War of 1812 based on plans prepared at the Washington Navy Yard (Chauncey 1814; Malcomson 2004; Smith 1993, 1995) (Figure 4).

A comparison of a Lake Ontario armed barge to these plans and to excavated examples from Lake Champlain (Emery 2003) and the Chesapeake Bay (Enright 1999) may suggest how well this early attempt at centralized design was implemented by U.S. shipbuilders. Furthermore, the armed barges were only a small portion of the shipbuilding effort at Sackets Harbor, which was building six other vessels that year despite being perennially short of skilled labor (Gibson 2012; Malcomson 1998). These conditions suggest that the barges may have been built by general carpenters under the direction of a shipbuilder in an early adoption of systematized construction. The introduction of centralized design to the Navy is not well understood and the implementation of systematized construction has only recently begun to be addressed in early U.S. Naval construction, making the armed barge potentially very important to the history of U.S. ship construction (Bauer 1988; Pevny 2008; Roland, et al. 2008; Thiesen 2006).

By 1823, the ships stored at Sackets Harbor were being described as “sunk and decayed,” by 1824 they were recommended for disposal, and in 1825 most of them were removed by Robert Hugunin (Hugunin 1825; U.S. Senate 1823, 1824). Three of the vessels, Sylph, Madison and Oneida were repaired and saw commercial service as Sylph, General Brady, and Adjutant Clitz, respectively (Anonymous 1827; Palmer 1984; USNHD 1964). The remaining ships were supposed to be broken up; however, Jefferson remained in the harbor, was partially dynamited in 1915, and is still identifiable today beneath the modern marina slips (Crisman 1989).

Hugunin also did not remove Mohawk, which remained in the harbor in 1828 (Mordecai 1828b). While there is a possibility that it was Superior that was left in the harbor (Mordecai 1828a), in the final decision for William Vaughan to remove the hull, it is Mohawk that is described (Mordecai 1829). The individuals involved in this decision served on Lake Ontario during the war and were very familiar with the ships, so it is unlikely that they confused one vessel for the other. Exactly how Vaughan removed Mohawk from the harbor is unknown, but one possibility is that he towed the already demasted hull out of the harbor and sank it in the closest safe location. The approximately 60-foot (18 m) deep center of Black River Bay would have rendered the hull no threat to any other vessel. 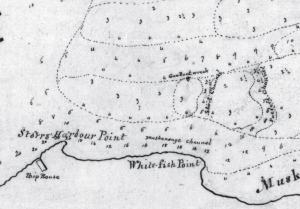 The fate of the armed barges was equally as enigmatic. One of the barges broke its mooring in a storm sometime before 1818 and drifted onto a sandbar near the junction of Muskellunge Creek and Black River Bay (Anonymous 1818; Gibson 2012). The location of this barge is indicated on an 1829 chart (Vinton 1829) and possibly appears as a small, unnamed obstruction seven years later (Stockton 1836) (Figure 5). After 1836, the wreck is no longer indicated on charts and it is unknown if it was covered by the shoal, removed, or destroyed. The remaining 14-armed barges were still in Storrs Harbor, but resting on the bottom in 1825, when they were sold (Adams 1825). It is not stated if the barges were removed from the harbor at that time.

Because the final disposition of Mohawk and the armed barges is unknown and because these vessels have the potential to advance our understanding of the naval War of 1812 on Lake Ontario and the development of the U.S. Navy in general, the authors organized a survey of the Black River Bay in 2011. 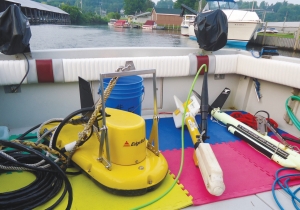 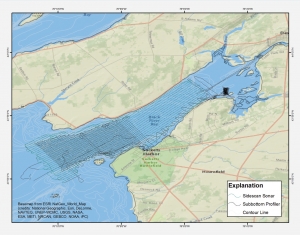 We used several different methods in an attempt to locate these shipwrecks. In searching for Mohawk, technology was mandatory. Black River Bay takes its name from the river that flows into it, and both deserve the appellation. The water in the bay is a dark, coffee brown with visibility underwater limited to approximately 10 feet. More importantly, we wanted to cover a large area because there was no specific information on Mohawk’s final resting place (Figure 6). It would have been impossible to cover this large area visually, so we employed a side-scan sonar, a sub-bottom profiler, and a magnetometer (Figure 7). A side-scan sonar emits an acoustic pulse that is reflected off the lake bottom and then collected by the instrument. The timing and quality of the returned pulse is used to paint an acoustic picture of the lake floor and anything lying on or protruding from it. This equipment is excellent for identifying any archaeological sites exposed on the bottom. However, not all sites are exposed. The sub-bottom profiler also emits an acoustic pulse, but at a much lower frequency. The low frequency allows the sub-bottom profiler to penetrate the bottom sediment to depict what is buried beneath. The trade-off is that the sub-bottom profiler produces much grainier images than the side-scan sonar, and while the side-scan sonar can cover a wide area, the sub-bottom profiler can only record what is directly below it. Finally, the magnetometer records variations in the earth’s magnetic field, such as those caused by masses of iron. By monitoring the magnetometer results, we were able to determine if the shapes depicted by the side-scan sonar and magnetometer contained iron, as might be expected in a shipwreck. When interpreted together, the results of these three instruments give us a pretty good idea of what is beneath the water.

In searching for Mohawk, we simply towed this equipment behind a boat and carefully monitored the results. Later, we also rechecked the results with the benefit of a darkened, stationary room. Several sites were identified, their GPS coordinates recorded; then archaeologists used SCUBA equipment to investigate them.

In terms of the armed barge that wrecked on the sandbar, historic maps and an earlier survey (Ford 2009) gave us a good idea of where to look. If the shipwreck survived, it was buried under several feet of sand. In order to narrow our search area, we used ground-penetrating radar (GPR). GPR is similar to sub-bottom profiling, except it emits an electromagnetic pulse, rather than an acoustic pulse, and is usually only used on land. In order to deploy the GPR, we took advantage of the frozen lake surface to drag the instrument across the ice. The GPR identified an approximately 75-foot- long anomaly buried under 9 feet of sediment, which we excavated using a water dredge.

Finally, we also investigated the area where the other 14 armed barges were moored after the war. Here, technology failed us. The lake weeds and grasses trapped in the marshy sediments prevented the instruments from producing usable data. Instead we shuffled through the water until we felt something with our feet. Each item was raised, photographed, and the location recorded with GPS, before returning each item to its original location.

Unfortunately, after spending three weeks on these endeavors our data were negative. We were successful in determining where the shipwrecks were not, but not where they were. In our search for Mohawk, we identified relatively few targets that had the potential to be portions of a large ship, and none that had the expected magnetic signature. After diving on the most promising targets, we found no evidence of the shipwreck, making us fairly certain that Mohawk was not scuttled in Black River Bay. Our use of various remote sensing technologies and the involvement of geologists, allow us to be nearly definitive on this subject. Not only was there a lack of physical and magnetic evidence for a large vessel, the sub-bottom profiler, combined with sediment cores, revealed that the bottom of the bay is covered with less than 3 feet (1 m) of soft sediment above a much harder substrate that would have limited the penetration of the wreck into the subsurface.

The armed barges were similarly elusive. Our excavation on the sandbar revealed natural stone at the depth that the GPR indicated. It would seem that the 75-foot anomaly identified by the GPR was a geologic feature rather than a shipwreck. While these results show that our innovative use of GPR to look for shipwrecks has promise, it was not entirely successful. In our search for the other 14 armed barges, we found several artifacts, including timbers, an axe head, and muskrat traps. While the traps were clearly modern, it was impossible to associate the other finds with the War of 1812.

So what does this work tell us? It seems likely that William Vaughn pulled Mohawk up on the shore and scrapped it for the wood and iron, rather than scuttling it, a method used on much of the Lake Ontario fleet, which left little or no archaeological record. It also seems that the armed barges were removed from Storrs Harbor when they were sold in 1825 and likely broken-up for their materials. Definitive historical proof still remains to be found. Finally, the barge lost on the sandbar — while our test excavation was negative, it represented a very small portion of the area where the armed barge wreck may be located. Locating a shipwreck through excavation is a time-consuming process; however, given that it now seems that many of the vessels from this period were wiped clean from the archaeological record, locating this particular shipwreck becomes increasingly important. Future work in this area will concentrate on additional remote sensing surveys to identify a more promising location to excavate.

This research was funded by a generous grant from the National Geographic Society/Waitt Grants Program, as well as support from Indiana University of Pennsylvania, Great Lakes Historical Society, the College of Charleston, the Institute of Nautical Archaeology, and the Sackets Harbor Battlefield State Historic Site. Bill Saiff Outdoors provided the survey boat and excellent piloting that allowed us to complete the survey.