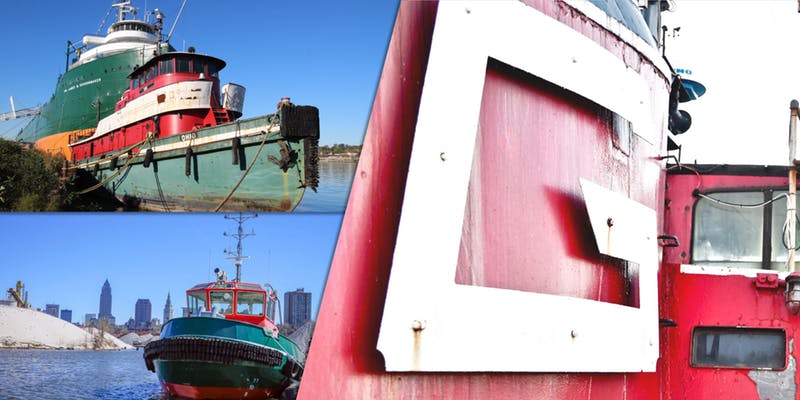 The addition of the Museum Tug Ohio represents only the second commercial museum ship on the Maumee River—the first being the Col. James M. Schoonmaker. Thirty years ago, the Schoonmaker (as the Willis B. Boyer) was introduced to Toledo as its first museum ship. “It’s been too long since a new museum ship came to Toledo” said Gillcrist. The addition of a museum tug fills a significant void in the permanent exhibit plan of NMGL.

The christenings will take place at the National Museum of the Great Lakes’ commercial dock located behind the building on the Maumee River. Guests and attendees will observe from the dock and patio behind the museum. Christenings of commercial vessels on the Great Lakes have a long and illustrious history. These events often drew thousands of spectators and VIP’s from the maritime industry from across the country.

The Sponsor of the Museum Tug Ohio is long-time NMGL employee and volunteer Mrs. Jane Smith. Mrs. Smith will break a bottle of beer over the bow rail of the Museum Tug Ohio instead of the traditional bottle of champagne. According to Gillcrist when the boat was christened the first time in Chicago in 1903, beer was used because the boat was going to serve the city of Milwaukee—the city that made beer famous! Gillcrist noted that Mrs. Smith was chosen as the sponsor because she best represents the volunteer spirit that makes projects like this one possible.

When: Friday, June 21, 2019—11:00 AM Where: National Museum of the Great Lakes, 1701 Front Street, Toledo Ohio. What: Christening Ceremony, tours of the Museum Tug Ohio and dockside viewing of new Tug Ohio (the public cannot tour the new tug, but a digital exhibit of its capabilities will be available).

When: Saturday June 22, 2019 (10 AM-5 PM) and Sunday, June 23, 2019 (12 PM-5 PM) Where: National Museum of the Great Lakes, 1701 Front Street Toledo, Ohio What: On board tours of the Museum Tug Ohio and dockside viewing of the new Tug Ohio (the public cannot tour the new tug, but a digital exhibit of its capabilities will be available).

Press Contact Information: Press can contact Christopher Gillcrist of the National Museum of the Great Lakes at 216-956-9734 or through email at glhs1@inlandseas.org Gillcrist will provide contact information with a representative from The Great Lakes Towing Company upon request.