There are few sights as awesome to experienced seafarers as the annual tug boat races in front of The Canadian National Exhibition at Toronto. In a way, it is an incongruous sort of race in which tugs up to 100 tons or more shoulder their ponderous way three times around an oval course. Four miles in 20 to 25 minutes. A race in this atomic age that goes to a winner who makes 10 to 12 miles an hour, yet it attracts increasingly greater crowds year after year.

Over the eight runnings of these races, it has become obvious that speed is not essential in racing. Speed is a relative thing. A race among turtles can be exciting, but it cannot be the spectacle that is presented by a fleet of eight or twelve powerful tug boats fighting their way around a course  1 1/3 miles around with 300-foot radius turns at either end and straightaway of less than 900 yards. Spectators are closer to the inside straightaway than a box seat holder in the ball park is to the center field fence. 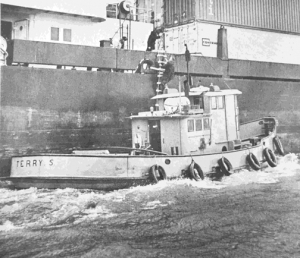 As in most types of racing with powered machines, there is always the element of danger. In these races we have seen sideswipes, collisions and close shaves but never any serious damage. In 1961, Captain William Hatton of Port Credit, Ontario, suffered a heart attack early in the race, slumped over the wheel of R.C.L. 12, and died early in the race. In 1963, the fleet Terry S , only 54 feet long and powered with a supercharged Cat diesel with after-cooler, cut under the bow of the Argue Martin, 78 feet long and powered with a 700-h.p. G.M. Quad diesel plant. In the rise and fall of the sea, the rubber bow bumper of the Argue Martin fell across the starboard after bulwark of the Terry S. Captain Harvey Randle of the Argue Martin, which is owned by the Hamilton Harbour Commissioners of Hamilton, Ontario, gritted his teeth and went into full reverse. In the heavy swells, it appeared that the end had come for the Terry S. Captain Art Scott and his crew climbed aboard Captain Randle’s ship which resumed the race. However, Terry S. remained afloat. Captain Lloyd Scott brought his Waterman alongside. He split his crew and in a few minutes Terry S. was going again and finished the race. 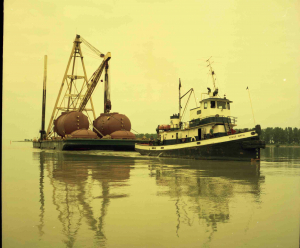 With all the variations in weight, power, beam, draft, steam, diesel, and so on, it’s quite a problem to set up the race so every boat in it has a chance to win the championship. First, we set up a prize structure for three divisions: steam, heavy diesel, and light diesel. Then a handicap system is devised each year. For some of the boats, of course, we have recorded times from previous races and we attempt to estimate or generally classify the other entries. Roughly, heavy diesels are sixty feet or more, light diesels are under sixty feet and, of course, steam is steam. In the 1963 race, the steam tug G. R. Geary started the race 300 yards ahead of the steam tug Ned Hanlan and 600 yards ahead of the heavy diesels. The light diesels started two boat lengths behind the heavy diesels because of their light hulls and relatively high power and maneuverability. 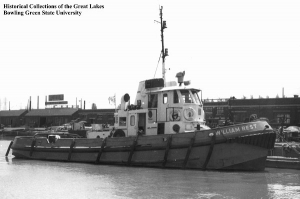 However, the best of handicapping — and our 1963 formula was not perfect in the case of light diesels particularly — does not provide all the answers. The skill and daring of the skippers are more of a factor than one might imagine. The Florence Cooper under Captain James Wert was runner-up in 1962. In 1963, Captain Wert remembered his 1962 experience, and seeing his competitors piling up on the turns and engaging in the “infighting,” swung wide, got clear of the heavy wash from the other boats and pulled away to romp home an easy winner. Even so, Captain Duncan McDonnell, racing for the first time in the Wm. Rest, stayed in the pack, and fought his way through it for second place by at least two boat-lengths.

Which boat is faster, the Rest or the Cooper? Obviously slowed down by the wash of the Geary, the Hanlan, and the Argue Martin for most of the last lap, one can visualize the Rest giving the Cooper a real run for her money in the same water. And what about the Argue Martin? This tug was really moving till the Terry S. tried to cross her bow from the inside. And then the Ivey Rose — hand steered — which stormed out of the last turn, caught the pack just before the finish and hammered out a ten-foot win for third place with her 22-ton, 290-h.p. engine. You can handicap the boats, but you can’t handicap the skippers!

About the Author: Mr. L. E. Pickett is General Manager of Flusher Products (Canada) Ltd., and marketing consultant. He has twice been Commodore of Port Credit Yacht Club, Port Credit, Ontario, and is a four-time Skipper of the Shellbacks Club of Toronto. For the past four years he has organized “The Telegram” Lake Ontario Championship Tug Boat Races for The Canadian National Exhibition at Toronto.

This account of the races was written by Mr. Pickett for INLAND SEAS at the request of Mr. W. M. Prentice, an active Toronto member of the Great Lakes Historical Society.