On September 6, 1947, Roy Long left the Marquette County Air Port in his plane. While passing near the Chocolay shore on Lake Superior much to his amazement, he saw lying on the bottom of the lake near a reef of rocks, and about a hundred yards from shore, the sunken hull of what looked like a large ore boat.

The surface of Lake Superior was like glass and its waters, due to atmospheric conditions, enabled one to see to a considerable depth. He circled about several times, flying low, and upon his return to Marquette he began querying as to the identity of the ship.

To answer his questions we have to go back to another September day, Sunday the 29th, 1895, fifty-two years ago. During the night a violent northeast gale had sprung up. The ore carrier [Charles J.] Kershaw and her two barges, the Moonlight and [Henry A]Kent, were attempting to make the turn to get inside the Marquette Harbor breakwater, when a steam pipe broke, and there was nothing for the ships to do but drift helplessly to shore near the mouth of the Chocolay River.

The Kershaw was smashed against a rock reef about a hundred yards north of the river’s mouth. The giant waves carried the Moonlight and Kent over the rock reef, and landed them far up on the Chocolay sand beach. 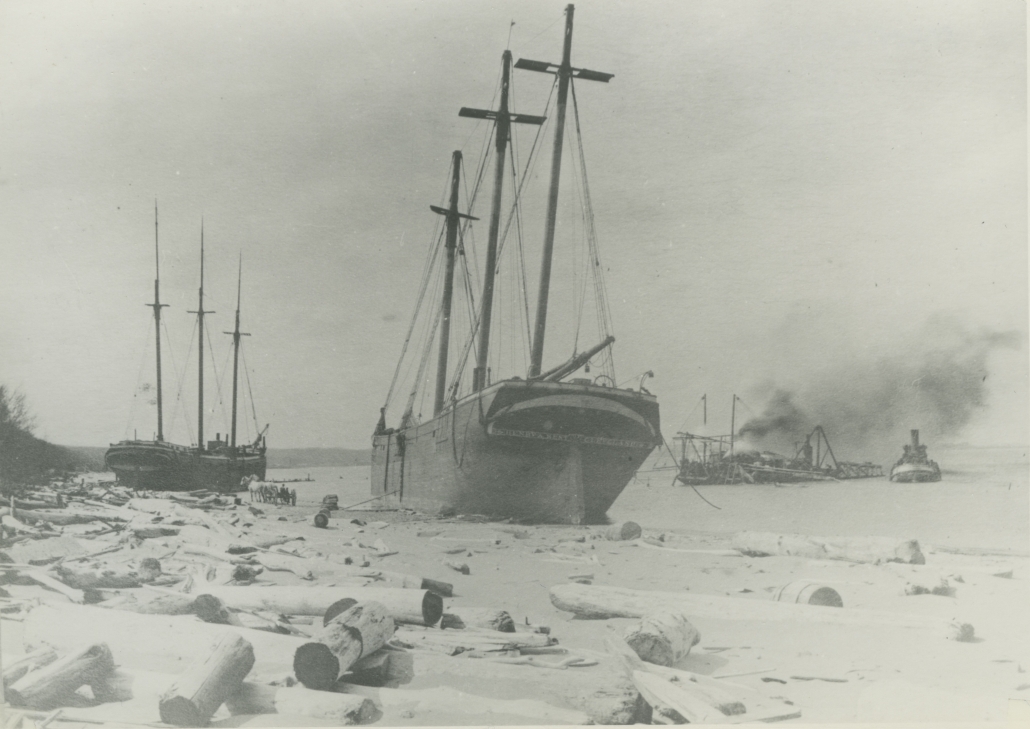 MOONLIGHT on the Chocolay beach with the HENRY A. KENT in the background. The remains of the CHARLES J. KERSHAW appear to be to right.

The lookout at the Life Saving Station gave the alarm and soon the surf boat was on the way to the Chocolay beach. There on their first trip in spite of the reef-infested shoals and high seas, they removed all but four of the crew from the Kershaw and brought them ashore safely.

It was Sunday, but the ministers preached to empty pews as thousands of Marquette people lined the Lake Superior shores watching the daring rescue. On the second trip out, the surf boat capsized halfway to the Kershaw, and the gallant lifesaving crew were thrown out, all, however, managing to reach shore safely. The surf boat had a large hole stove in its bow where it had struck a submerged rock, and was rendered useless. With a volunteer crew in addition to the Coast Guards (who were all right after their experience of the morning), Captain Cleary got out the big life boat at the Station, and another attempt was made to reach the Kershaw. By this time she had broken in two, and the bow end had started drifting toward the beach.

The ship’s captain and the remaining three members of the crew were in a yawl boat in the lee of the stern, where hour after hour they kept rowing determinedly, attempting to keep the small yawl from capsizing. It was a thrilling moment for the thousands who lined the shore, but one of great anxiety to the brave rescuers in the life boat and the four benumbed seamen in the little craft toward which she was speeding, the gale furnishing the impetus and the skilled hands of the crew guiding her in her flight with unerring precision.

And now she is within a hundred yards of the spot where the Kershaw lies, broken-backed, awaiting the final stroke that would rend her in twain and send her dissevered hulk to the bottom of the lake; now it is fifty, now twenty, now ten, and now she gracefully swings around the stern of the disabled vessel on the rock, and within a few yards of the yawl in which the four men have been riding,  buffeted by the great waves and chilled by the cutting northeast gale since early morning. Will the brave crew of the life boat succeed in their noble endeavor or will they fail and have to rally for another attempt? The swaying, silent crowd along the shore watches breathlessly, with an interest so intense as to check expression by word or gesture as the critical moment arrives. Many a silent prayer goes up for both the rescuers and those waiting to be rescued.

The yawl goes down in the trough of a mighty sea as the life boat sweeps toward it. Now both are lost to sight for an instant and they both reappear, the life boat many yards away from the yawl and the latter empty. What has become of the four men? It seems almost incredible that they could have been transferred from the yawl to the life boat in that instant of time that the two were together in the trough of the churning sea, shut out of sight of the straining vision of those lining the shore by the mighty heaving billows. But now a tremendous cheer goes up from a thousand throats as it is seen that the life boat carries four more persons, and is valiantly battling its way to the shore, where it was successfully beached. The men in the boat, being too exhausted to pull for the harbor, took a chance and landed on the beach without mishap, although they were soaking wet and half frozen.

The crews of the barges, Moonlight and Kent, got off without difficulty and hardly were wet, for the huge waves pushed the two vessels high up on the beach.

I was just a small boy when I witnessed this daring rescue, which was vividly recalled by the chance glance from his plane by Roy Long. I know of only one member of the crew of the Moonlight who is still alive, Edward Noren, who makes his home on State Highway M 3, a few miles east of Gwinn. Here he operates a small eating place and gas station. On the wall in a very prominent place is a picture of the Moonlight and Kent.

This article first appeared in Inland Seas in Summer 1948.