Projecting a few feet above the edge of the Corps of Engineers’ pier at the Lake Erie end of East 9th Street in Cleveland, Ohio, is a large white box mounted on two sizable black pipes. This box houses a water level gage1 which is continuing a record of the water levels of Lake Erie begun by the U. S. Lake Survey of Detroit, Michigan, in 1859.2 Of course, the gage was not in this precise location during the entire period, nor were automatic recording gages, as are used now, available in the early years.   The Lake Survey has maintained, and is maintaining, gages at other locations on the United States side of the Lake which have various shorter periods of record.

On the Canadian side of Lake Erie, water levels have been obtained since 1860 by Canadian agencies at Port Colborne, Ontario, which is at the upper entrance to the Welland Ship Canal, and also at several other locations for shorter periods.

Sporadic level records for a number of years prior to 1859 are available for several locations on the Lake, including Cleveland and Port Colborne. 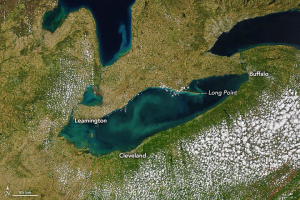 Like Lake Ontario3  and the other Great Lakes, Lake Erie experiences a seasonal rise and fall and irregular longer period fluctuations as the result of various natural causes. Based on monthly average levels, the average seasonal rise and fall of Lake Erie has been about 1.6 feet. The maximum seasonal increase on the same basis occurred in 1947 when the Lake rose 2.75 feet between March and June. The maximum seasonal decline of level occurred between April 1930 (which was the month of the seasonal high that year) and March 1931 when the Lake fell 3.17 feet. A prominent period of rising trend of the Lake occurred between 1925 and 1929 when the annual average level rose slightly less than two and one-half feet; a prominent failing trend occurred between 1929 and 1934 when the annual average level declined three and one-quarter feet.

But the description of Lake Erie’s seasonal and long-period water level variations becomes prosaic beside the description of her daily and hourly variations.    Very unlike the other Lakes is Lake Erie’s rapidly changeable character in response to the winds. Child of the placid Detroit River and father of the robustious Niagara, Lake Erie is a combination of the qualities of its origin and its issue. The almost innumerable small craft to be seen on its surface on a summer’s day, some far out on the Lake, demonstrate the quality of gentleness. Yet, the most peaceful such estival scene can be, and often has been, changed in a few minutes’ time to chaos and sometimes disaster by a furious squall.

The big ships, also, are afflicted by the capriciousness of Lake Erie, although mostly as a result of the severe fall storms that sometimes sweep the Lake from end to end, rather than as a result of squalls. In a report entitled “Effects of Gales on Lake Erie,” which was prepared for the United States Deep Waterways Commission in 1896, William T. Blunt, an Assistant Engineer of the U. S. Lake Survey, wrote:

Of all the five Great Lakes, Lake Erie shows the largest fluctuations of surface in heavy winds. The cause is readily seen. Its axis extends WSW and ENE over its main body, with a sharp turn at the islands to W by N and E by S. As hard winds of long duration are almost invariably from SW or NE, and as the lake is, on the whole, comparatively shoal, the effect of wind will be at a maximum. Aside from this, the shallowness of the lake and consequent danger to navigators, and the fact that the greater portion of water traffic from the northwest leads directly to its shores, tend to make changes of level more noticeable and important, even were they not larger than on other lakes.

Water level records of the Lake Survey strengthen the mariner’s characterization of Lake Erie as the most fickle of the Great Lakes. On January 2, 1942, a storm occurred which caused the Lake for a short time to be about thirteen and one-half feet higher at Buffalo than at Toledo.

In addition to the natural factors affecting the levels of Lake Erie, certain works of man have influenced the Lake, although to a relatively minor degree. The diversion of water into the Welland Ship Canal has lowered the Lake. Two other diversions, the diversion out of Lake Michigan at Chicago and the Long Lake —    Ogoki diversion into Lake Superior, have contributed effects because they have affected the supply of water to Lake Erie. In Senate Document No. 28, 85th Congress, 1st Session, dated January 1957, it is stated:

To learn more about how the USACE measures water levels today (2021) Click Here.

About the Author: Mr. F. A. Blust is Assistant Chief of the Hydraulics and Hydrology Branch of the U. S. Lake Survey, Detroit, Michigan. He is a graduate of the University of Wisconsin and a registered Professional engineer in Michigan and Ohio.