The iron-hull steamboat Kingston was constructed in 1855, by Bartley and Dunbar of Montreal1, for the Honorable John Hamilton of Kingston, Ontario. Registered at Kingston, the vessel measured 174 feet long, 26 2/10 feet beam and 9 feet depth. Her gross tonnage was 345 863/3500, engine room 143 tons, giving a register tonnage of 201 863/3500 tons. The hull was clencher built, sloop rigged, fiddle head, no galleries, one deck and one mast. The vertical beam engine was driven by two boilers, set athwartships on either side of the engine. 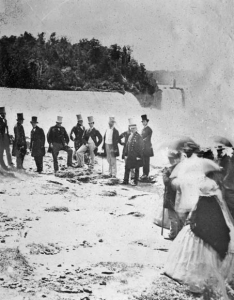 Kingston was placed on the Kingston-Toronto service. On August 28, 1860, the Prince of Wales, later King Edward VII, the Governor- General of Canada and a large party proceeded by railroad from Montreal to Dickinson’s Landing. Here the Kingston was boarded and took her distinguished guests back to Montreal via the rapids of the St. Lawrence River. On September 7, 1860, the Royal Party again boarded the Kingston at Cobourg and were taken to Toronto. A week later Kingston was honored for the third time when she took the Prince and his entourage back from Toronto to Montreal.

The career of Kingston was unusually free of the more or less minor accidents and mishaps to which most of the vessels on the Great Lakes were exposed. This happy state of affairs abruptly came to an end on June 11, 1872.

On this day Kingston cleared Brockville, Ontario, at 1:30 P.M. with about 100 passengers for Toronto, where she was to embark the Queen’s Own and the Governor-General’s Bodyguard for Niagara. When off Grenadier Island, about eighteen miles above Brockville, fire was discovered in one of the rooms located near the smokestacks. Despite the efforts of the passengers and crew the fire spread rapidly and the stricken steamboat was headed for Grenadier Island, where she was beached. The flames prevented the launching of more than one lifeboat, and this capsized on reaching the shore, a woman passenger drowning; her life belt was improperly adjusted.

The propeller Dominion, bound downriver shortly after the accident, picked up the survivors and brought them all to Brockville. The Kingston burned to the water’s edge and was a complete wreck2. 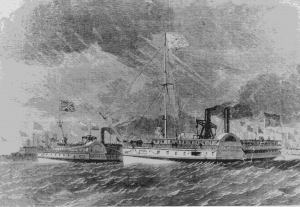 We now come to the crux of this story: was Kingston abandoned where she lay, with only her engine being removed later, or was the burned-out hull salvaged together with the engine and rebuilt into the Bavarian?

The Official Canadian Government Report (1) states: “She was destroyed by fire off Grenadier Island on June 11, 1872. There were two casualties and the ship was completely destroyed, loss estimated at $75,000.” Note the words, “completely destroyed,” as well as the amount of the loss!

To lend credence to the above statement there is another official report concerning the loss of the steamboat Bavarian on November 5, 1873, to the Canadian Minister of Marine and Fisheries3, from which the following pertinent parts are quoted: “The Bavarian was an iron paddle-wheel steamer of 230 tons register, and 427 tons gross. She was built in Montreal, and came out in the spring of 1873. The engine was about 18 years old. It was taken out of the steamer Kingston after the burning of that vessel, was repaired, and put into the new hull.

The engine, which is known as a beam engine, was placed about the centre of the vessel, with the steam cylinder towards the stern and the cranks forward. The engine room was open to the main deck saloon fronting the ladies’ cabin. The boilers were under the deck on each side of the engine, the front of the boiler towards the bow, and just past the crank room. The steam chimneys, with their smoke-pipes, stood just forward of the crank room.” Note that while it was stated that the engine was 18 years old and had been taken out of the Kingston, it is specifically stated that it was put into a new hull!

Additional evidence, of a negative type, is the fact that a careful and painstaking search of the files of newspapers at Douglas Memorial Library, Queen’s University, Kingston, Ontario, failed to locate any mention of the removal of the burned-out hull from Grenadier Island.

On the other hand, it is stoutly claimed by such well-known authorities on Great Lakes vessels as Mr. Robert W. Shepherd of Como, Quebec, Captain Frank E. Hamilton of Kelleys Island, that the entire hull of Kingston was salvaged and rebuilt into the Bavarian. Both of these gentlemen insist that an iron hull would be damaged by fire to such an extent as to ensure complete destruction. They argue, and in the writer’s opinion it’s a valid and logical point, that if the fire had been of such intensity as to destroy the hull, it would have most certainly also destroyed the machinery, which would probably have been subjected to greater heat than the hull itself, which was cooled off by the outside air.

A Guide to the J. Ross Robertson Historical Collection4, states in an explanatory note to print No. 2604 as follows: “Kingston, 1855-72 — Bavarian 1873, then Algerian — The steamer was of 456 tons, and built at Montreal for Royal Mail Line and Canadian Navigation Co.; . . . wrecked in the St. Lawrence, 1872, she was rebuilt and renamed Bavarian, but in 1873 was burned near Bowmansville with great loss of life. She was rebuilt as the Algerian, and in 1875 was bought by the R. and O. Co.” Other books on marine history, such as Croyl’s History of Steam Navigation, also assert that Kingston became Bavarian. However, Canadian Illustrated News, under date of November 15, 1873, states: ‘On Wednesday week the Bavarian, a new steamer of the Canadian Navigation Company’s line was burnt on Lake Ontario fifteen miles off Oshawa.” Mr. Shepherd also suggests that if Kingston was rebuilt, this job was done at Montreal for the reason that at that time work was in progress enlarging the St. Lawrence canals and it would have been quite a job towing the wreck to Montreal when Kingston was so near and handy. Mr. Shepherd further mentions that in all the Canadian shipping lists he has, Cornwall (Algerian, Bavarian, Kingston.) shows built at Kingston in 1874 but registered at Montreal. 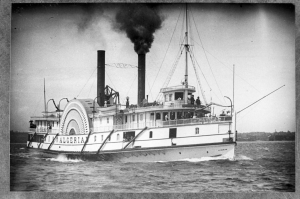 One more factor is to be considered, and that is the stunt of advertising some broken down or wrecked old “crock,” which has been fixed up and revamped as a spick and span, brand new boat. In connection with Kingston/ Algerian, the following advertisement in the Toronto Globe April 22, 1874, is quoted:

A new steamer, named Algerian will be launched shortly from the ship-yard at Kingston. She belongs to the Canadian Navigation Company, and is to take the place of the Bavarian.

A rather different tune is played by the Toronto Globe in an item under date of July 9, 1874:

LAKE STEAMBOATS AND THEIR EQUIPMENT

. . . The old Bavarian, alias the old Kingston will soon be on the route under a new name, with the old engines that have twice passed through fire.

Then this item appeared somebody must have gotten busy, for exactly 12 days later, on July 17, 1874, the Globe printed this:

The new Algerian is on. She is quite handsome and good, and is commanded by” Capt. Trewell, a gentleman well qualified for the position, as indeed are all the other captains of the line.

Truly, there’s nothing new under the sun!

In conclusion, the writer wishes to express his deep and appreciative thanks to Miss Melva Eagleson of the Douglas Library, Queen’s University, Kingston, and to Dr. W. Kaye Lamb, Dominion Archivist, Public Archives of Canada, Ottawa, Ontario, for their most generous assistance and cooperation which have been of inestimable advantage. Sincere thanks are also tendered to Mr. Robert W. Shepherd and to Captain Frank E. Hamilton.