The disappearance of the steamer Bannockburn on Lake Superior on the night of November 21, 1902, is one of the Lake ‘s mysteries. Fifty-five years have passed and little more is known of her fate today than was known in the first week after she was lost. 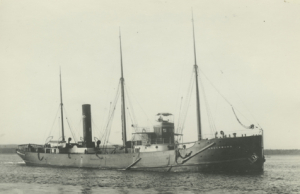 British-built in 1893, the Bannockburn was owned in 1902 by the Montreal Transportation Company and was engaged in carrying grain from the head of the Lakes to lower Lake ports. She was a propeller 245 feet in length, 1620 gross tons, and was regarded as entirely seaworthy. She sometimes had one or two barges in tow but on this, her last trip, was coming down alone. She had a cargo of 85,000 bushels of wheat when she left Port Arthur on the 21st and as the season was advanced it is probable that this was consigned to a Georgian Bay port. With favorable weather the vessel might make one more trip before the close of navigation.

Through the vessel passages reported in the press we can follow the movement of the Bannockburn on her last trip up the Lakes. She cleared from Midland, Ontario, on November 18th, passed through the Canadian ship canal at Sault Ste. Marie at 3:40 A.M. on the 19th and presumably would be at Port Arthur around 9 or 10 A.M. on the 20th.

The Fort William Times-Journal in its issue of November 20, reported in its Port Arthur news that the steamers Bannockburn, Chili and Saturn were that day loading grain at the Canadian Northern elevator at Port Arthur. However, the Bannockburn did not clear until the next day, at what hour is not recorded. Thereafter, all is a mystery.

At this late date in November, there would not be many vessels trading into Port Arthur or Fort William which would be likely to see the Bannockburn as she headed toward the Sault, but about a week later the press carried a dispatch quoting Captain James McMaugh, of the steamer Algonquin, as having seen the missing Bannockburn on the 21st while headed up the Lake. His statement was that at a point “about 50 miles southeast of Passage Island and northeast of Keweenaw Point,” running against a strong head wind, he had sighted a vessel which he believed was the Bannockburn. She appeared to be running well with a favorable wind but when he looked for her a few minutes later she had disappeared. The weather was hazy at the time and he supposed that she had gone from sight in the mist. He remarked to his first officer that the vessel had vanished very quickly.

The records of the Canadian ship canal show that the Algonquin passed up at 1 P.M. on the 20th which, with average running time, would place her in the position mentioned. If the Bannockburn left Port Arthur early on the morning of the 21st, she would be somewhere in the vicinity of the point where the Algonquin claimed to have seen her.

This is the only claim of having seen the missing vessel which was given publicity at the time, but there is another claim which did not appear in the press but of which the writer can give some details. The passenger steamer Huronic, of the Northern Navigation Company’s fleet, was on Lake Superior on the night of the 21st. She had left Sarnia on the second last trip of the season at 6 A.M. on November 20th and arrived at the Canadian Sault at 2 A.M. on the 21st. She passed through the American locks at noon of that day and arrived at Port Arthur at 9 A.M. on Saturday, the 22nd. Two entries in the writer’s personal diary are of interest in this connection:

November 21 – At night we had the worst storm of the season.

November 22 – During the storm of last night our engines sustained slight damage which they are repairing today.

On the morning of the 22nd, when the pilothouse men came off watch and were at breakfast, they remarked that they believed they had seen the Bannockburn during the night. They had at that time no knowledge of any mishap, nor had they heard any news of the Bannockburn when the Huronic left Port Arthur downbound at 7 P.M. on the 25th. They probably heard that the Bannockburn was missing when they arrived at the Sault and this would be confirmed on arrival at Sarnia on the 28th. The down trip had been delayed by bad weather on Lake Huron. The writer’s diary has this entry on the 28th:

Heard today of the missing Bannockburn. This boat we passed on the night of the 21st.

The observations by Captain McMaugh of the Algonquin was made in daylight, though in misty weather, and he gives an approximate location. That, by the pilothouse crew of the Huronic, was at night. There is no record of the hour or the location on the Lake. It might be asked, how could the identity of a passing vessel be determined at night and in stormy weather? Lake sailors, however, at this time of the year would know quite well what vessels were likely to be moving to or from the Lakehead. They would probably be able to recognize another vessel by the location of her deck lights and if near enough would probably have exchanged signals by their whistles. These would easily be recognized. They would also naturally be curious as to the identity of any passing vessel at that late a date in November. In any case, the men on the Huronic believed that they had seen the Bannockburn.

There was at the time and has been since, much speculation as to the fate which overtook the vessel. A rumor current at the time was that the boat was carrying flaxseed, a dangerous, shifting cargo. However, there is no evidence that the cargo was other than wheat. The possibility of having run upon Superior Shoal has also been mentioned, though this would require the vessel to be off course. Superior Shoal was, as yet, not marked on charts unless added by captains themselves. That a severe storm raged on Lake Superior on the night of the 21st is indicated by the Huronic’s experience.

As soon as serious fears for the safety of the Bannockburn developed, tugs were sent out to search the waters and shores of Lake Superior. The Toronto Mail and Empire reported on the 28th that the tug Boynton had left the Sault the night before with instructions to go around Michipicoten Island, then on to the Caribou Island area, follow the north shore up to Isle Royale, return by the north shore to a point opposite Whitefish Point and come home by the south shore. No trace of the missing vessel was discovered, though later it was reported that the steamer Rockefeller had found some wreckage. The location was not stated at the time.

Captain George R. Wood, of Port Dalhousie, was in command of the lost vessel. George Booth, of Kingston, was chief engineer. The majority of the crew were from Kingston.