It was a cold November day at Inverhuron, a small village on the Canadian shore of Lake Huron. Snow was falling and the frost in the air was increasing rapidly. For many hours the seas of a violent northwestern had been lashing the beach. It was November 15, 1900.

The previous night Kenneth MacNaughton, then 42 years of age, returned to the village after completing 28 seasons on the Lakes as a schooner man. In 1872, at the early age of fourteen, he shipped as a cabin boy at Detroit.

MacNaughton, a jovial, ruddy-faced man of medium height, was looking forward to the restful days during the winter months. He would soon be making his rounds to again greet the many friends he had not seen since the previous spring.

Although the residents of Inverhuron were not aware of it, a few miles away the schooner J. F. Card was fighting a losing battle with the howling northwestern. She was being blown closer and closer to a rock-strewn shoreline. 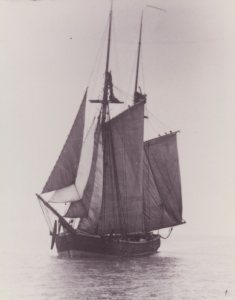 The J. F. Card was built at Vermilion, Ohio, in 1864. She was 137 feet long and had a beam of 25.8 feet. Her home port was Port Huron, Michigan, and her master was Captain Brown of Detroit. For many years she had been a member of the well-known Bradley fleet. At this critical hour she was owned by Henry Weineman, Jr., of Detroit. The Card was carrying 260,000 feet of lumber loaded at Midland, Ontario. The cargo was consigned to W. B. Mershon & Co., Saginaw, Michigan.

About noonday the struggling vessel crashed upon the rocks of Point Douglas. A man on shore spotted the wreck, then hurried to the village to spread the alarm.

Point Douglas is two-and-a-half miles north of Inverhuron and lies about midway between Southampton and Kincardine, Ontario. In 1900 the Point was a densely wooded area, where a person on foot would be almost certain to get lost if he wandered off his trail.

Kenneth MacNaughton was chosen to head the rescue party, which was organized as quickly as possible. A heavy rowboat was loaded on a wagon. The horses were driven at utmost speed over three miles of winding bush roads.

At the scene of the disaster it was apparent that the ill-fated ship was hard aground on the Point and had begun to break up. The yawl boat had been swept away and lay battered on the beach. The broken main-mast was hanging over the side; the foremast was leaning badly.

The crew of six men and the woman cook were still aboard. They stood by the rail and stared at the shore which was so near and yet so far away. They knew no man could make his way through the hungry seas without a lifeboat; his body would be gashed and broken on the under-lying rocks.

In desperation the crew lashed several planks together to form a raft, then lowered it from the deck. The woman and one man boarded the heaving planks. The raft immediately capsized as a heavy sea broke over the schooner. The man grabbed a line that dangled from the groaning vessel and climbed back aboard. The woman’s head was slammed against a rock as she was pitched into the surging water. In a moment she disappeared beneath the raft.

Fortunately, a line had been placed around her waist before she left the ship. The free end of this line was wedged between two planks. With a pike pole a sailor succeeded in retrieving it. The unconscious woman was hauled back on deck. Her limp form was placed on the stern above the flooded cabins.

The storm had not abated. Many members of the rescue party gave up all hope of ever reaching the stricken ship. They were convinced that an attempt to launch the rowboat would be a futile task, which could readily result in a further loss of life.

In the process of studying the distance between the seas MacNaughton detected an unusually strong southerly current. Presently he asked for volunteers. Two men immediately stepped forward.

By moving into the rampaging seas at the most opportune moment, the little craft was finally launched. The men bent over the oars with all the strength they could muster. Even then it appeared for a time they would never make it. When they had all but given up, they suddenly found themselves in the southbound current. In a few minutes they were swept to the lee side of the doomed schooner.

Every man clinging to the deck wanted to scramble into the rowboat, which soon began to fill with water from the seas crashing over the wreck. The two volunteers bailed furiously, MacNaughton decided to take the woman and one man. The hazardous return trip then began. After a tremendous struggle they reached the welcome shore, but not before the two men on the oars declared they would not risk their lives a second time.

MacNaughton again called for volunteers. Two other men were willing to take the chance. Hour after hour the precarious operation continued. By late afternoon all the crew had been landed safely on the rocky beach.

The woman was taken to MacNaughton’s home and was wrapped in heavy woolen blankets. During the night she regained consciousness.

On November 22, 1900, the Detroit Free Press carried the following report of the wreck:

The small fore-and-aft schooner J. F. Card, which went ashore near Southampton, Ont., six days ago, has entirely broken up. Not enough is left of her to make a souvenir cane. The point where she was carried on by a heavy nor’wester is lined with jagged rocks, and every boat that fetches up there goes to pieces, unless released in a hurry, if the winds continue a few hours. No lives were lost, but the crew didn’t have time to save anything but the clothing on their backs.

The Card measured 276 gross tons, rate A 2½, was 36 years old, valued at $3500, and without a cent of insurance. She was commanded by Captain Brown of this city.

The following morning the crew saw the wreckage scattered along the bleak shore and shuddered when they thought of what would have been their fate if they had been left on board.

Preparations were soon made to drive the shipwrecked sailors to Kincardine, Ontario, the nearest railway station.            The woman complained bitterly about having to wear a sou’wester instead of a hat she had recently purchased. Captain Brown glared at her for a moment. “Listen, my good woman,” he said. “You’re lucky you’re not going home in a box!”

In his humble home, within earshot of the pounding surf of Lake Huron, Kenneth MacNaughton spent many retirement years. When a raging November gale swept over the water, he often thought of that far-away day when the J. F. Card met her doom.

About the Author: Mr. McLeod Orford, a resident of Hamilton, Ontario, was born along the eastern shore of Lake Huron. As a boy his interest in ships was aroused by several lake captains who had homes in or near Tiverton, Ontario, his native village. Among these men was Captain Angus MacKenzie of the Juniata. At an early age Mr. Orford sailed all five of the Great Lakes. He has published articles on marine history in the London Free Press and other periodicals. He is a member of the Great Lakes Historical Society and the Ontario Historical Society.