With three months required to dismantle the wooden superstructure of the City of Detroit, the wrecking contractors announced on November 29th that superstructures of the Greater Detroit and the Eastern States would be burned to speed up the scrapping operation for these remnants of the D & C fleet. Burning arrangements were made with Captain Frank Becker, operator of a Detroit towing company, who had prior experience in burning the Put-In-Bay in 1953. Having spent some 40 years on the Lakes, and being active in several nautical organizations, including the Marine Historical Society of Detroit, he was not content merely to tow them off to an isolated spot and set them afire. As the souvenir collectors made their last trips aboard these boats in search of mementos, he made plans for a farewell ceremony befitting their importance in the history of passenger travel on the Great Lakes. 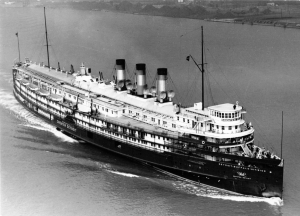 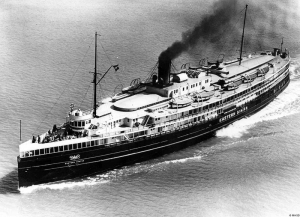 The Greater Detroit, built in 1924 at a cost of $3,500,000, along with her sister ship, Greater Buffalo, were the largest passenger ships to sail on the Great Lakes, and the largest sidewheelers in the world. Their overall length of 535 feet exceeded the Aquarama by 15 feet, although the gross tonnage of the Aquarama is approximately 11,000 compared to their 7739. Their 12,000 horsepower inclined engines were the most powerful ever installed in freshwater ships. The Eastern States, built in 1902, was much smaller (366 feet overall) and less glamorous. However, she was a real “workhorse,” giving 48 years of dependable service between Detroit and Buffalo, Detroit and Cleveland, and Detroit and Chicago.

The burning was originally scheduled for December 10th at 6:00 P. M. in Lake St. Clair, approximately three miles offshore from the Grosse Point Yacht Club. Representatives from NBC and local and out­of-town newspapers were assembled at the Third Street Dock at 9:00 A. M. that morning, but 35 mile-per-hour winds forced postponement of the ceremony for two days. Nature seemed to be lending a hand in prolonging their life, but not for long. On December 12th, the weather forecast was more favorable, and the press representatives assembled again. Captain Lewis Mantell, last skipper of the Greater, came out of retirement at Belle River, Ontario, and donned his uniform for the final flag raising on her stern. A woman with 30 years’ service in the house­ keeping department of the D & C was also on hand. Although reminiscing freely about the Greater’s glorious past, they did not wish to remain for the fiery finale. Around 10:30 A. M. the procession got underway with four tugs abreast, the B. H. Becker, Atomic (1955 International Tug Race Winner), Aburg, and Ethel 5., towing the Greater while the Eastern States was tied on behind. These four tugs abreast were quite a sight themselves, and a fifth tug, G. F. Becker, was utilized by Captain Becker to direct the operation by radio-telephone. 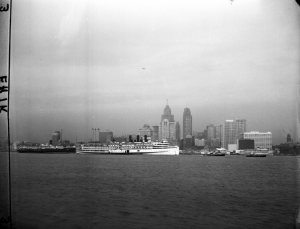 GREATER DETROIT and EASTERN STATES under tow on December 12, 1956

As they headed up-river, the auto-carrier George Ingalls and the carferry Lansdowne gave their farewell salutes of three long and two short whistles, acknowledged by the tugs. The sun broke through the overcast for a few moments, giving downtown Detroiters a last glimpse of these once­ stately craft which had sailed on the busy waterway at their front door. The souvenir hunter, the art collector, and the man seeking salvageable material for a project at home or in his business, had paid thousands of dollars for the more valuable furnishings aboard these ships. The Greater still presented an impressive outward appearance as the December winds whined through her littered cabins and decks. The Eastern States looked more bedraggled tagging along behind – minus her wheel house and with many windows broken. Proceeding past Belle Isle and out into Lake St. Clair, the funeral procession dropped anchor in a shallow dumping ground in Canadian waters. However, using two Canadian tugs and mooring in Canadian waters necessitated an unexpected customs clearance for Captain Becker’s two tugs which were to take press representatives out to the burning site.

Traffic jams had developed on East Jefferson Avenue on the two previous evenings as thousands of motorists with their families came out to bid the ships “goodbye.” Perhaps the postponements diminished the crowd on December 12th, but the police departments of communities on Lake St. Clair required extra help to keep traffic moving. Many came and went, or flooded newspaper switchboards with calls as the hours dragged by without any sign of fire. Little did they know of the frustrating delays being encountered by Captain Becker and his associates in getting the fires started. However, those among the estimated 15,000 spectators who held out until 10:00 P. M. were well rewarded for their patience, even though many were moist-eyed as the spectacle unfolded before them.

Press and newsreel representatives, and some people previously associated with the D & C Navigation Company, had gathered at Captain Becker’s apartment at 3:30 P. M. in anticipation of a 4:oo P. M. departure to the scene. However, the delay for customs clearance resulted in a 6:30 departure. The G. F. Becker, a former mail boat on the Detroit River, contained a well-equipped cabin which accommodated some 12 to 15 reporters and photographers. others in the party were accommodated aboard the smaller B. H. Becker, which also carried fireworks to be shot from the stern of the Greater for half an hour preceding the burning.

We headed into a moderate sea which brought spray over the bow, and in 24 degree temperature the deck soon became coated with ice. The pitching and rolling had a nauseating effect on several of us in the crowded, heated cabin. After an hour’s ride, the ghostly white form of the Greater loomed before us in the G. F. Becker’s searchlight. Photographers slung their cameras over their shoulders and ventured out on the deck, de-iced to some extent with salt. Original plans were to spotlight the top deck so that photographers might shoot the lowering of the flag and the playing of taps. However, rough waters forced cancellation of fireworks and this ceremony on the Greater’s stern, so the men preparing inflammatory materials aboard both ships were taken off. As the firing was about to begin, it was discovered that 30 gallons of fuel oil were still to be spread on the Greater. With some difficulty, three men were placed back aboard her and 45 minutes were consumed in distributing the oil and getting these men back on the tugs. At 9:00 the ships were ready, but the electrical detonator from tug to ship could not be used due to the rough water. A flare was then tossed aboard the Greater and it started a small fire on the main deck at the last passenger gangway. As it was about to flicker out, the B. H Becker went alongside and a roman candle was shot into a pile of oil-soaked scrap lumber which the wrecking company had gleaned from their yard and loaded into the main deck. This material flared up in a few seconds and the burning was really underway at 9:45. The partly used roman candle was cast overboard, and the sight of colored balls of fire, shooting back at the B. H Becker from the water, was one of the few occasions for laughter that night! 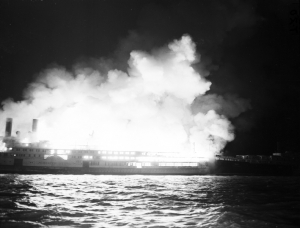 While the fire licked its way to the upper decks, a few more fireworks were set off for the entertainment of those who waited ashore. Flame broke through the roof at 10:00 and inched forward against the wind. The sky was lighted for miles around and great clouds of smoke billowed down toward Detroit.

As the press tug cruised back and forth, the wind diminished, the water became smoother, and photographers were able to take pictures without the risk of being tossed overboard. However, just as the NBC Television filming began with the blowing of taps, a wave hit the tug over the stern. The bugler, Captain Becker, and NBC interviewer Richard Applegate, were tossed to the deck, getting their shoes filled with water. Those who saw one and a half minutes of the burning on the Chet Huntley-Dave Brinkley program at 7:45 P. M. the following night, may now better appreciate the difficulties encountered in filming that brief scene!

By 11:00 P. M. the flames had reached their peak, and attention was then diverted to the Eastern States. Being anchored only a few feet down-wind from the Greater, it was expected that flaming embers would blow onto the Eastern so that both ships would be afire together. Some flame did leap across open water and ignite wooden deck railing on the Eastern’s bow, but it burned very slowly. A few creosote-impregnated fenders also caught fire. However, to the surprise of many, the embers which dropped on her boat deck in great numbers did not touch off a sweeping conflagration. When her turn came to go up in flames, she slipped her anchor, and drifted approximately a mile away before going aground. It seemed that she was making a last effort to escape her fate. Being off-wind, the few little fires aboard burned very slowly, and it was necessary for a tug to go alongside and throw a flare into the main deck, which also contained combustible material.

Her half-century old superstructure with countless coats of paint to feed the flames, was soon aglow inside. To the accompaniment of gun­ powder explosions, which caused her to shake noticeably, the flames shot through the roof at 11:45. Snow had been failing and few of the press chose to remain on deck any longer. In their uncomfortably cold condition, they asked to be taken ashore. However, those of us who remained topside, saw the more spectacular blaze as the brilliant orange flames mounted skyward – higher and brighter than those of the Greater. It was a bit paradoxical that the ship which was the least glamorous of the fleet should provide the most colorful finale to this era which had come to an end. Even the ghost of Frank Kirby might have smiled at this turn of events for his “proud old lady.” As we departed, the Eastern was still burning brightly, while the Greater had begun to cool off – the metal railings and fixtures in her superstructure collapsing into twisted wreckage.

We docked at 1:00 A. M., cold and tired after six and a half hours on the sturdy though bouncing tugs. It was “A Night to Remember” for the rest of our lives and looking back on the events of that evening there came to mind a particularly appropriate quotation from the works of John Masefield, “We shall not see such ships as these again.”

About the Author: Mr. Weber is a resident of Toledo, Ohio, and holds a Master of Arts degree in Social Administration from Ohio State University. Previously engaged in adult probation work in Milwaukee, Wisconsin , he is presently a Case-Work Supervisor in the Lucas County Juvenile Court.