Thirty-four vessels foundered with two hundred and seventy crew members during the great gale of November 9, 1913, on Lake Huron and Lake Superior. There was no mishap on Georgian Bay.

All those who lost their lives realized their increasing danger, and some put on life preservers. This remark applies also to the crews of the bulk freighters William B. Davock and Anna C. Minch which foundered during a sudden furious and unexpected gale on Lake Michigan during the autumn of 1940.

In marked contrast the vessels Mamasoo and Hibou foundered suddenly in the southwestern area of Georgian Bay in 1928 and 1936, respectively, while crew members were performing their duties with no thought of imminent danger. They were drowned, not through any conscious negligence of their own, but because their vessels had been improperly laden.

Originally christened Macassa the Manasoo was launched at Glasgow in 1889, her length being 178 feet, beam 24 and moulded depth 16 feet, registering 756 tons. She had two Scotch boilers, and expansion engines of 600 H. P., which drove twin propellers and gave her a cruising speed of twelve and one-half miles per hour. 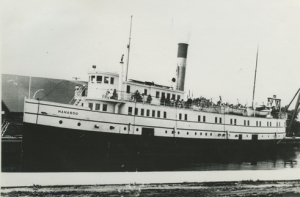 Built to the order of the Hamilton Steamship Company, she was delivered to her owners in July, 1889, and was at once placed on the forty­ mile daily offshore return trip from Hamilton to Toronto, leaving at 9:00 A.M. and returning during the afternoon.

She was licensed to carry two hundred passengers and also package freight. Business increased, and her operation proved so profitable that an additional steamer, the Modjeska, was soon purchased. The latter was of greater tonnage, and her pilothouse bridge extended full width.

The latter had 250-foot length, and was of 1064 gross tons. She was built in 1904 by R. and W. Hawthorn Leslie and Company at Hepburn­on-Tyne, and was delivered to her owners in Hamilton in June, 1904. She was powered with Parsons turbines, which gave her a cruising speed of nineteen knots.

From 1904 to 1910 the Macassa, Modjeska and Turbinia did capacity business between Hamilton and Toronto, but during the latter year autos made themselves felt as a counter attraction to travelers.

In 1911 the Turbinia was purchased by the Niagara Navigation Company, Ltd. and placed on the cross-lake route from Toronto to the ports of Niagara-on-the-Lake and Lewiston. The Macassa was lengthened 36 feet at Collingwood, January 19, 1905.

By 1927 the autos, buses and trucks, in addition to frequent railway service, almost monopolized the transportation of passengers and package freight between Toronto and Hamilton. In the autumn of that year the Hamilton Steamship Company sold the Macassa to the Owen Sound Transportation Company. The Modjeska was purchased first in the year 1921, and the Macassa in 1927.

During the winter of 1927-28 the Macassa was renamed Manasoo with the intention of having her make a weekly return trip with passengers and freight from Owen Sound to Sault Ste. Marie and Mackinac Island, calling en route at Killarney, Manitowaning, Little Current, Gore Bay, Thessalon and other Manitoulin and North Shore ports.

Her operation on this route during the 1928 navigation season proved a financial success. In September she completed her schedule, and would have been laid up for the winter at Owen Sound, but was assigned to make a special freight trip, to bring a herd of cattle from the port of Manitowaning on Manitoulin Island.

She cleared from Manitowaning during the evening of Friday, September 14, carrying 47 cattle stowed aft in the “tween-deck,” and 69 cattle forward. All the cattle were confined in pens, but were left untied, which was the usual procedure. This stowage was faulty, because all the cattle could congregate on the port or starboard side of their pens, and thus produce a list in the vessel. Also aboard were some empty oil drums, but the hold was devoid of either cargo or ballast. 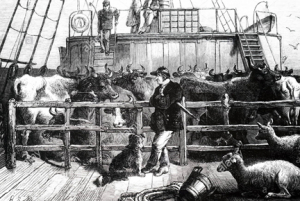 Cattle aboard a ship

The cattle were owned by Donald Wallace, a drover of Oil Springs, Ontario, and Thomas Lambert, a cattle man from Oil Springs, was a passenger. The vessel had passed inspection, and carried the required number of lifeboats, as well as a life raft.

Captain McKay was on watch. After the vessel had rounded Cape Smith, he picked up the light on Lonely Island, and kept it on his starboard bow. The west wind was kicking up a choppy sea, and when the Manasoo came abreast of Griffith’s Island at 3:00 A.M. on September 15th, she was in the trough of the waves and rolling. Nevertheless none of the men aboard who were awake had any thought of danger, and crew members off watch were asleep in their quarters.

Captain McKay had remained on watch. Suddenly he realized that his vessel was not only settling in the water, but was also listing to port. He therefore left the bridge and started to investigate, but soon found himself struggling in the water and his vessel sinking from sight. Many of her crew were drowned in their bunks. She foundered off the east shore of Griffith’s Island in over thirty fathoms, about twenty miles north of Owen Sound. No attempt at salvage has since been made.

They were doomed to drift eastward in the cold, rough water for 60 hours, and their raft covered fifteen or twenty miles before they were sighted by the crew of S.S. Manitoba late in the afternoon of Monday, September 17th. only five men then remained on the raft, and they were taken to Owen Sound.

Chief Engineer McUtchen was not among them because he had succumbed to exposure. His clothing was made use of by the purser, who had left the foundering vessel clad in nothing more than his underwear. It had from the first been apparent that the raft was overloaded, and the corpse of the chief engineer was expediently committed to the deep, without benefit of clergy.

The crew members of the Manasoo lived in Owen Sound and surrounding district, and on Manitoulin Island.

Rescue tugs from Midland, Collingwood and Owen Sound cruised the scene on Tuesday, and later, while planes flew overhead, but no trace of additional survivors was found.

This foundering was made the subject of an official inquiry at Owen Sound. After its conclusion Captain L. A. Demers, Dominion Wreck Commissioner, stated there had been ample time to call all hands and prepare the lifeboats. He criticized the captain and first mate for “bad stowage, indifference and neglect of duty.”

The 121-foot motor vessel Hibou was built as a steamer in 1907 at Toronto by the Canadian Shipbuilding Company, Ltd., for the Federal Department of Agriculture, being registered at Quebec City under the name Alice. With a beam of 26 feet and moulded depth of 11.8 feet she was of 308 gross tons. 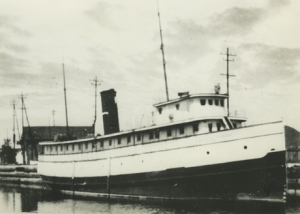 She was sold later to Mr. John Tackaberry, of Lion’s Head, who changed her into a motor vessel, and altered her name to Hibou.

Due to improper lading she foundered suddenly in calm weather on November 21, 1936, off Squaw Point, three miles outbound from Owen Sound dock. She carried a crew of seventeen, and seven of them were drowned, including the stewardess.

Her cargo did not exceed 194 tons, and was not excessive for a 308 ton vessel. It included 94 tons of flour, 30 tons of pressed hay, and $10,000 worth of groceries consigned to Manitoulin Island and North Shore points.

The Hibou remained on the bottom of the Sound for almost six years. It was not until the summer of 1942, after World War II had been waged for three years, that salvage operations were begun, due to the increasing shortage of vessels, as well as steel for their construction.

The Hibou was successfully raised to the surface by Captain Torn Reid, of the United Towing and Salvage Company, Ltd., of Sarnia. The salvage operations consumed over two months, and she was then towed to Owen Sound harbor. She was, however, in such a dilapidated condition that her owners decided not to rebuild her.

They sold her to the Sincennes-McNaughton Line, Ltd., who towed her to Montreal, P. Q. She remained there as an unregistered wreck until November, 1943, when, after being rebuilt, she sailed down the St. Lawrence under the flag of Honduras.

The latest information is that this vessel was registered at Puerto Cortes, Honduras, in the name of the Pan-American Steamship Corporation of Panama, who maintain offices at 8-10 Bridge Street, New York City.