The crew of a harbor tug lying in a slip adjoining the Lackawanna hard coal docks near the mouth of Buffalo creek might have cocked their ears and listened.

The ferry man sculling his bunty toward the collection of rotten spiles on the south side of the creek might have idled his sculling oar a split second, but no more. Those sounds were nothing new to them. 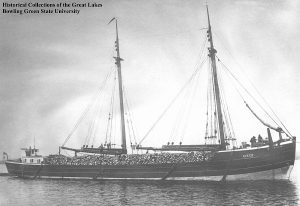 There was mutiny on the Unadilla. Harsh and discordant voices arose resonantly from the forecastle hatch and were answered in moderation by the captain standing alongside the foremast, lantern in hand. The Unadilla, a three masted schooner, was floating low with a cargo of hard coal. The stevedores were gone, the docks deserted. Distant lightning and the low rumble of thunder gave an inkling of what soon would be the weather outside.

One voice, more dominant from the forecastle, let it be known that its owner was not in favor of leaving a safe harbor and putting out in such a night, “may he be everlastingly dashed for a swab headed deck hand if he was.” He had sailed the western ocean on ships that carried yawls bigger than the Unadilla with captains that knew their stuff. It was unreasonable to expect it.

The captain answered this argument with the statement that he had sailed the seven seas himself and had seen better men put in irons for refusing duty in port. He didn’t intend to leave port in the face of this storm. All he wanted was the hatch covers put on. The cargo was going to Milwaukee to lay in bins all winter. The shippers would not want it to get wet. The hatch covers were accordingly put on, the crew led by the “Chicago Kid” returned to the peace and quiet of the forecastle and all hands turned in.

At daybreak a puffing tug pulled the schooner through the breakwater and the mutiny was forgotten in the hoisting of sails, the coiling of ropes, the pumping of bilge water and the washing down of decks. The voyage was begun. Such was the routine of sail driven lake traffic in the late 80’s (1880s).

Although only in my teens this was the second mutiny in which I had been a passive participant, neither being on the high seas. Captains have a right to shoot on such occasions and it was fortunate for us we did not have one of the fighting type of captain who would have invaded the forecastle and beat up the lot of us. Our leading spirit, the “Chicago Kid,” as he was known over the lakes, a brawny sailor of 45, in my opinion was yellow. A veritable bull on the end of a rope, his appearance was terrifying. There was a large dent in his skull above the left temple, his left eye was missing and a jagged scar extended down his left cheek to the lower jaw, probably the result of a blow from a capstan bar wielded by a powerful adversary in a drunken brawl or a fall from a yardarm upon which he had ventured too soon after a rampage ashore.

He had shipped in Buffalo the day before in company with a pal and while shifting back and forth the schooner to facilitate loading, had noticed the great energy his pal had displayed under the watchful eye of the mate. As soon as the mate’s back was turned the Kid seized a hunk of the hard coal that littered the decks and drew back his powerful arm in a gesture as if to brain his pal, his single eye blazing with passion as he hissed “You’re one of them strong men when the mate’s around.”

We were through the straits of Mackinac heading into Lake Michigan, reversing that  course where ships are guided by Skillagalee and Waugoshauc, a couple of beacons which guide vessels in the straits from the Lake Michigan side, when an accident occurred on the Unadilla.

The signal halyards had been carried away and the skipper came out of the cabin with a coil of new manila rope which he handed to the mate with instructions to have one man go aloft.

When a schooner is close hauled, beating to windward, the sailor at the wheel is guided by a pennant flown from the tip of the main mast, the higher spar, from which point a signal of distress is also flown. The rope which hoists the pennant into position is called the signal halyard and runs over a small wheel called a sheave which is set in the peak of the spar before it is stepped. To pass a line through this sheave while the vessel was plunging in a sea way was no boy’s job.

It was in the after-dog watch, all hands were on deck as the mate handed the coil of rope in the general direction of the Chicago Kid, his pal and myself. I was getting the same pay as the Kid and he looked at the coil of rope without making a move and then turned his blazing single eye on me with a look of scorn.

Here was a challenge I couldn’t ignore. I did not relish the job. I had never done it before but I took the coil from the mate, dropped it on deck, slashed a bowline into one of the ends to make a noose to go around my neck and started up the main rigging, the Kid watching me with a sardonic grin.

Some 60 feet above a vessel’s decks are the crosstrees, horizontal skeleton platforms which form the footing for sailors when storing topsails and so on. Leading up to the crosstrees are the shrouds, stout wire cables with tarred rope ratlines for steps with a spread of eight feet at the rail and converging to one strand at the masthead. When transferring from the ratlined rigging to the crosstrees the sailor bears his weight on his palms with his legs dangling in space. From the outer ends of the two stout timbers which form the crosstrees, two smaller wire stays lead upward and encircle the top mast some 16 feet below the truck. With a wire stay cutting into each hand, assisted by a leg twist, the sailor starts mounting and shins the upper 16 feet as a boy does an apple tree. In untying the bowline and passing the end through the sheave he uses one hand and his teeth. The rest of his anatomy is busily engaged maintaining altitude.

My last view of the Chicago Kid and his pal was as they were crossing a bridge in Milwaukee “three sheets in the wind.” Friendly enough when drunk, he waved farewell with a horrible leer intended to be a smile.

I never saw him again.

About the Author: O. Stubig of Sandusky, Ohio, recalls this episode of his youth on the lakes in the days of sail. “There are plenty of old sailors left,” he writes, “who can vouch for the identity of the Chicago Kid, an overbearing terrorizing bully but nevertheless a capable seaman. Many a skipper was at times glad to have him in the crew and just as glad to be rid of him at the end of a voyage. He represents a type of schooner man who shifted from fresh water to salt water with the seasons. “