During the American Civil War, rates to ship wheat from Chicago to Buffalo averaged 7 to 8 cents per bushel. In the years immediately following the war, the northern states’ economy boomed and freight rates on the Lakes soared. During the 1866 season, rates went from 12 cents per bushel to 23 cents by season’s end. This in turn spawned a shipbuilding boom – 71 new vessels were commissioned during the season.1

Shipbuilding activity remained vigorous throughout the winter of 1866-67. When navigation opened in the spring, 99 new vessels were launched around the Lakes.2 One of these hastily constructed vessels, launched on April 3, was the propeller City of Port Huron. Built in Port Huron, Michigan, by Joseph P. Arnold, the steam barge was 411 new tons; she was 169 feet in length with a beam of 31 feet and a depth of 11 feet. Her machinery was manufactured by the Phoenix Iron Company of that city.3 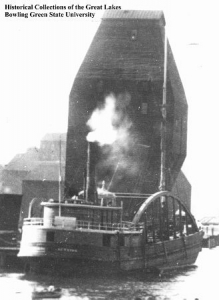 With Captain George Bedford in command, the City of Port Huron entered the lumber trade for her owners, Crawford, Johnston and Company, in June 1867. Her normal duties saw her carrying lumber from Collins Inlet in Georgian Bay to Detroit and other Lower Lake ports, often returning with supplies. The Detroit Post on August 6, 1867, reported her in Detroit with 450,000 feet of lumber. While the vessel continued to operate for the entire season, design flaws became apparent requiring her to be fitted with a port and starboard side arch truss and other strengthening modifications over the winter of 1867-68.4

Like most vessels of her day, the City of Port Huron had her share of scrapes and minor accidents. In May 1870, she was reported aground on Stony Island Reef, south of Detroit. In December 1871, she again found the bottom, going ashore on the Clay Banks where she had to be towed off by the steam barge B.W Jenness. The 1873 season saw her on the rocks in the Neebish Channel. In late July 1874, she was involved in a minor collision with the scow St. Charles near Harsens Island in the Saint Clair River.5 Owing to these bumps and scrapes, her practice of towing as many as four barges, and possible fundamental design flaws, her insurance rating was reduced to A-2 in 1873, and B-1 in 1875. 6

While ownership and her port of enrollment remained in Port Huron, her master for the 1868 season was Charles Ely. From the 1869 season through the 1875 season, her master was Captain A. B. Drake who, with others from Dunkirk, New York, purchased the vessel in 1873. Interestingly in 1874, before the last rating downgrade, the City of Port Huron was reported hauling grain from Toledo to Erie. During the 1875 season, she was permanently shifted to the iron ore trade.

As early as July 3, 1876, the City of Port Huron was reported leaking badly when it departed Presque Isle where it had stopped for repairs while downbound with a load of iron ore.7 Despite her condition, the vessel remained active in the ore trade until September 4, 1876, when her luck ran out. While downbound in Lake Huron with the barge Dictator in tow, her pumps could no longer handle the incoming water. Captain George Davis ordered the Dictator be cast adrift and headed the City of Port Huron for shore where he hoped to run the vessel aground to avoid sinking.

Sadly, just a mile from shore off the village of Burtchville, Michigan, the steam barge broached to, broke her back and foundered in about six fathoms of water. Captain Davis, his son and seven other crewmembers climbed on top of the cabin roof, which was just above the water’s surface. Two other crewmembers climbed the foremast, which also stuck out of the water. Soon, however, the City of Port Huron‘s cabins began to break up in the heavy seas. Those sailors that had taken refuge on the roof were cast into the lake and scrambled to secure any piece of floating wreckage that they could find. Residents from the village of Lakeport, seeing the plight of the shipwrecked sailors, transported a fishing boat some three miles overland to the beach adjacent to the site of the wreck. They successfully launched the boat and rescued five of the survivors. Captain Davis and three others floated to shore. Three more along with the Dictator were rescued by passing vessels. Miraculously all 11 crewmembers were thus saved and transported to their shipwrecked vessel’s namesake city.8

In Port Huron, controversy arose as to why the nine-year-old vessel had been lost. Some vessel men believed that the steam barge was over­ loaded, which Captain Davis vehemently denied. Others blamed vessel design and poor construction. It was even speculated that when loaded with a heavy cargo, such as iron ore, her stern would rise as her coal bunkers were emptied. As her cargo hold was forward of her engine room, this would result in a bow down condition. In such a condition, her wheel (propeller) and rudder could not perform properly, and her siphon pumps would become increasingly ineffective at clearing her hold of water. Again, Captain Davis responded to this accusation indicating that the down by the bow appearance was a result of her design, claiming in effect that “she always looked that way.9

In the days following the loss of the City of Port Huron, marine inspector Captain John McKenna went to the wreck site and salvaged the vessel’s foresail. In his opinion, any attempt to raise the vessel would be a waste of time as she was breaking up and rapidly going to pieces.10 While some interest was expressed by various wreckers, no action was taken. The following season it was determined that the vessel had broken in two. Machinery, fixtures and some cargo were salvaged by the wrecking tug Monitor in August 1877,11 and sold at auction by U.S. Marshall Matthews in Detroit on December 12, 1877. The winning bidder at $1,000 was Darius Cole.12 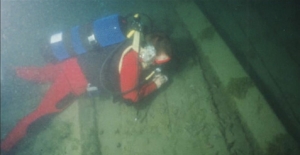 In the years since the Marshall’s sale in 1877, the remains of the steamer City of Port Huron lay largely undisturbed and mostly forgotten. Then in the summer of 2001, local scuba divers David Losinsky and Paul Schmitt rediscovered the shipwreck. Ironically, though the two had been looking for the wreck on and off for the past 20 years, the discovery was, for the most part, an accident.

Most newspaper references to the shipwreck had the steam barge foundering a mile off shore near the village of Burtchville. Though the village of Burtchville no longer exists, a check of the 1873 Atlas of the State of Michigan revealed that a village of that name did exist where Burtch Creek empties into Lake Huron. The village was completely destroyed during the Great Michigan Thumb Fire of 1881 and never rebuilt. Lonsinsky and Schmitt focused their search for the shipwreck in the waters about a mile off shore at that location without success. Then in the late spring 2001, Losinsky, while flying a helicopter, spotted a dark patch on the lake bottom off Lexington Heights, some four miles north of Burtch Creek. Later that summer, the two located the site by boat and rediscovered the wreck of the steamer City of Port Huron. The wreck, which is broken in two, lies one and three quarter miles from shore (location 43 13′ 400″N, 82 29′ 050″W). Iron ore is still heaped on the cargo deck. The starboard and port sides with their arch trusses lay on the lake bottom. The stern section is broken away and lies near by.

About the Author: Paul Schmitt retired as Dean of Instruction at St. Clair County Community College in 2006. He and his wife, Marilyn, presently live in Lakeport, Michigan. His previous contributions to Inland Seas® were, “Two Sister Ships Tell of the Side Wheel Steamers” (Winter 1995) and “A Hard Luck Boat, Loss of the Propellor Troy” (Winter 2000).