History would be duller without its footnotes, and the history of the Great Lakes during the opening Summer of the St. Lawrence Seaway will perhaps be brightened for future researchers by the Seaway voyage of two Indian rhinoceroses. Rudra, (the boy), and Mohinja, (the girl), sailed from Antwerp to Milwaukee aboard the motor vessel, Beechmore, of the Furness-Great Lakes Line. As far as can be ascertained, they are the first rhinos ever to sail the Great Lakes. This should give them a unique place in the cargo division of the many “firsts” scored during the Seaway’s first season. 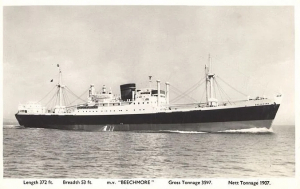 Providing shipboard quarters for Rudra and Mohinja was a headache, not for the ship but for the zoos they left behind them when they left Europe to start life in the New World. This was in spite of the fact that both rhinos are still just kids, and at the time of sailing neither one had reached even half of its ultimate weight. Rudra, 2 ½ years old, weighed 2,600 pounds. Mohinja, 1½, weighed 1,800 pounds. Eventually, he’ll weigh about 6,000 pounds and she’ll weigh about 5,000.

Even at less than half weight, Rudra and Mohinja were nothing you’d want charging around a ship loose and in an ugly mood. To ensure their staying where they belonged, the Basle, Switzerland, zoo sent Rudra off in a steel-enforced, slatted crate that weighed a ton, while the Whipsnade Zoo near London packed Mohinja into one that was equally strong but somewhat smaller. These were bolted down, side by side, on the after deck of the Beechmore, giving the rhinos a ringside seat for the loading and unloading activities at the hatch directly in front of them. Fortunately, when the ship was working, they indicated enjoyment — or at least indifference — to the bustle by remaining quiet and peaceful.

It was important to quite a few people that Rudra and Mohinja should be happy. They cost $15,000 apiece, and the $30,000 total is the biggest price ever paid for one exhibit by the Milwaukee zoo. Their voyage therefore had a few touches reminiscent of a royal tour.

For one thing, they had their own personal attendant throughout the 20-day trip — Milwaukee Zoo Director George Speidel, who had sole charge of their care, and served their king-sized meals of hay, grain, grain pellets, gallons of water and a few apples and carrots on the “demand” system. That meant, as the rhinos quickly found out, that whenever they wanted something to eat, Mohinja had only to moo and Rudra to bump against the walls of his crate. 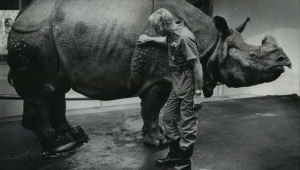 Rudra and his veterinarian in Milwaukee in 1975

Then there was the advance welcoming committee, sent out from Milwaukee to meet the rhinos part way, just as a contingent of noblemen used to meet a foreign royal bride en route and escort her to her new realm. The Milwaukee group, smaller and less glamorous than these court cavalcades, included Mr. Larry Smith, president of the Milwaukee County Zoological Society, two newspaper reporters and a newsreel cameraman. They were aboard the Beechmore as she traveled through Lake Huron and Lake Michigan in perfect summer weather that made rhino-greeting seem a very pleasant assignment indeed!

The only flaw for the reporters was the task of dictating their stories about Rudra and Mohinja to rewrite desks back in Milwaukee over the crackling, fading radio-telephone up in the pilothouse. There were moments when it seemed as if no news story below the importance of a Summit Conference was worth such difficult lobbing through space. On the other hand, the arrival of $30,000 worth of rare rhinoceros is no minor item either. Capt. Glynn Roberts of the Beechmore showed his awareness of this fact by taking his ship into Milwaukee in full dress, the fluttering flags adding a festive detail to a scene already made gala by a crowd of more than 200 welcomers at the dock and a green and white marquee stretching behind them in readiness for the party which followed the unloading of Rudra and Mohinja.

The guests of honor did not attend. They celebrated their safe arrival later, out at the zoo, by munching contentedly on a “welcome home” snack of about 30 apples apiece.