“Why, she’s returned to Cleveland!” someone exclaimed. Excitedly we agreed, “It’s hard to believe!” 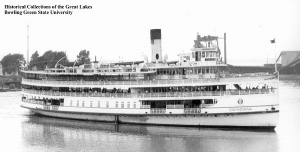 High in a Cleveland office building while projecting, planning and pondering things marine, all eyes suddenly looked out over the waterfront to focus on the silhouette of the white, but battered, Canadiana, under tow of the tugs Texas and Missouri. It was 4:10 P.M. on a calm August 16, 1967. She had been towed to the East outer harbor by Great Lakes Towing’s 1,750 hp., 118-foot tug Laurence C. Turner, from Fairport Harbor, where her present owners, Waterman Steamship Corporation, had been storing her.

The Fairport dock had to be given up and another one found. Captain Paul J. Ranahan had located a berth for her in Cleveland, and he, after the 26-mile and three-hour trip on the bridge, said, “She went along like a beautiful yacht and very silently.” The two harbor tugs then took her from the Turner, and as we watched, they nudged her into the old river bed at Whiskey Island where she was secured to the Plain Dealer dock. She is now stored there to await her ultimate fate — in deplorable condition.

During the last few years the Canadiana has been an ill-fated vessel, and seen amongst an overgrowth of weeds and trees at an unused dock near Cleveland’s West Shoreway her appearance appropriately reflects the hard life the old lady has had since 1957. She was built by Buffalo Drydock Company in 1910 for Lake Erie Excursion Company. Her official number was 207479, her dimensions: 209’7” x 45’ x 15’ 8“, hull #215. She ran many successful seasons on alternate trips with the Americana to Crystal Beach, Ontario. The company later changed to Buffalo and Crystal Beach Corporation and in 1934, to Crystal Beach Transit Company. She operated on a two-hour round trip schedule, and, depending on which day of the week and on business, she made from four to six trips a day. Then, as the result of business problems in 1956 and 1957 and a race riot aboard ship, she left Buffalo and was chartered in the Spring of 1958 to Seaway Excursion Lines, Ltd., Toledo, Ohio, where her schedule was Toledo to Bob-Lo Island.

It was encouraging to see her in operation in 1958 as she made fast to the Bob-Lo dock one bright summer afternoon as we were upbound in the Amherstburg Channel aboard the Aquarama. But, on July 31, 1958, she struck the Terminal Railroad Bridge injuring three persons, and crushing her forward deck. She was sold to satisfy claims of the crew’s back wages on October 15, 1958, by the U.S. District Court. Mr. Gordon Vizneau and the Toledo Excursion Lines bought her for $28,500.00.

It was again thought that perhaps this was the beginning of a renewed life, but a severe winter was coming. During lay-up on the Maumee River, crushing ice flows tore an 18-inch hole in her bow on February 13, 1959, and she almost sank. Sold again, this time to Lucas County Bank, Toledo, at a U.S. Marshal sale on June 13, 1960, and again on November 23, 1960, to Pleasurama Excursion Line, Cleveland, her name was changed for the first time unofficially to Pleasurama.

Captain Harold S. “Red” Harding brought her to Cleveland and docked her for about two years at the same area where she presently is located. Then, with his harbor excursion boat Carol Diane, towed her to Buffalo where she lay at the foot of Main Street and later Rich Marina on the riverside of the Black Rock Lock on the Niagara River. There she was viciously vandalized.

In July 1966, Clevelander Sam Parella bought her and on August 26, 1966, the tug Burro towed her to Fairport Harbor where she lay for two years. She was disgraced by not being restored or cleaned up, and was also subjected to the uncertainty of rumor. Was she going to be a restaurant, a night club, or were her oil burners, her boilers or even her engine and equipment going into the Erie Queen? 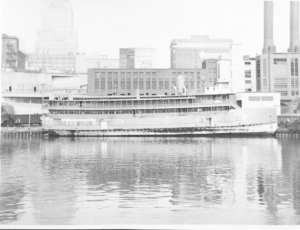 CANADIANA laid up in Cleveland

In January of 1967, she had a tonnage change from 974 gross and 427 net, to 1,684 gross and 909 net tons. Sold in March 1967, to Mowbrays Floating Equipment Exchange, Inc., she was resold the same month to Waterman Steamship Corporation, both of New York, presumably for trade-in tonnage on a vessel of the reserve fleet of the Maritime Administration. The large quantity of marine plywood enclosing her port and starboard bow effectively prohibits the curious. Did this possibly increase her gross tonnage?

So the renamed Canadiana is resting, rusting and waiting. And, as far as is known, she has never left Lake Erie!