Oldest Car ferry in active service on the Detroit River, the Huron, is a familiar sight along the Windsor and Detroit waterfronts. Time was when the Huron was new, and great was the excitement which prevailed in connection with her launching at Point Edward in June, 1875. The Sunday Commercial of Port Huron, which is no longer published, carried a fine account of the launching:

It was the longest side launch on record, the great steamer sliding over fifty feet before she struck the water. The launch was very successful, the boat going off promptly, the moment the last two small lines holding the braces were cut by two men on deck. The view was very pretty and animated. The deck of the Huron was well filled with people and she was gaily decked with flags and streamers. The large crowds on the Canadian and American shores, the steamers, with their throngs of excursionists, lying out in the river, and the sailboats darting hither and thither over the blue waters made such a marine picture as is seldom seen. As the Huron touched the water she was greeted with the whistling of the steamers and the shouts of the people. She has her engines all in and is nearly completed. She will be on duty the end of the present month.

The new ferry Huron launched at Point Edward is the finest railroad ferry on the rivers. Length over all, 240 feet; breadth, 52 feet, hold 15 feet. The hull is entirely of iron and was built at Newcastle, England, the plates being put together here (Point Edward). The iron averages one-half inch in thickness. Her capacity is 24 cars, these to be shipped on three tracks.”

Additional information regarding the construction of the Huron was to the effect that her engines and boilers were built at Dundas, Canada by Mr. Wilson. 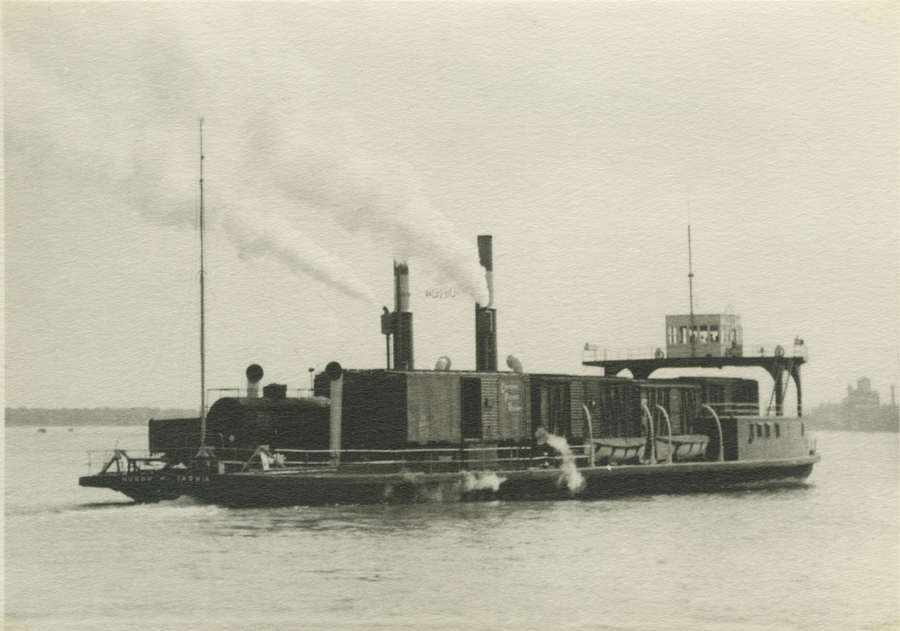 References to individuals brighten up accounts of the launching. “As she (the Huron) started down the ways, Miss Jessie S. Hughes of Toronto broke the traditional bottle of wine over her bows.  The launch was a complete success, not the slightest delay or accident occurring.”

“On Friday evening (June 4) Mr. Smith, the foreman, gave the men who had been employed on the boat a banquet on board.” This must have been a grand party, for it is stated, “Since last August (1814) from 150 to 200 men have been engaged in putting the pieces together.”

Mr. John H. Smith, I am told, subsequently moved to Cleveland, but through the assistance of Mr. David Gray of Sarnia and Mr. James Jack, Jr., of Point Edward, I have ascertained that his Point Edward home is now the residence of Mrs. Laina Oya, at the southeast corner of Albert Street and Michigan Avenue.

James Jack, Jr., as a small boy of six, witnessed the launching of the Huron. His father, James H. C. Jack, one-time Grand Trunk baggage master at Sarnia, has left a vivid account in his handwritten diary:

June 3rd, 1875 (Thursday). Much cooler and pleasant after last night’s rain. The country looks gorgeous, all Nature being decked in floral green and seems to be making amends for the late spring. This afternoon at 2:20 the new car ferry Huron was launched into her native element. The affair was witnessed by immense crowds.

A second reference to the Huron occurs in the Jack diary under date of Dominion Day, July 1, 1875: “At 3 p.m. the new ferry boat Huron followed by the Manitoba went out into the lake for a trip. These boats were loaded with pleasure seekers.”

Opening of the tunnel between Sarnia and Port Huron in 1891 resulted in the transfer of the Huron to the Detroit River. Here she functions as a car ferry during the mild part of the year, but in effect the winter, ties up and serves as a heating plant supplying the Windsor yard offices.

She also heats the passenger car tracks before the locomotive is coupled on to the cars, so that the coaches (passenger, baggage and mail) are all ready to be shipped out on short notice, properly heated and ready for use.

Present day residents along the Detroit River may be excused for believing that nothing exciting has ever happened to the Huron.  But in this they are mistaken, for in or about 1912 the Tashmoo caused her to sink at the Windsor water front. Repair work was in progress at the time on the propeller of the car ferry, which instead of being in dry dock was receiving attention at the Grand Trunk slip dock in Windsor at the foot of Glengarry Avenue. Two car (gondolas) of coal had been run on to her bow, elevating her stern, and unwittingly making her an easy victim for the swell of the fast traveling Tashmoo. These waves came in through her portholes and sank the car ferry.

This repair job had an unpleasant sequel for Captain Baker of the salvage company. A very valuable diamond ring, which had been presented to him for a previous salvaging job, slipped off his finger while he was washing his hands on the bridge of his tug. His ring fell overboard and was never seen again, in spite of efforts by his divers to recover it.

In 1913 another exciting experience befell the Huron. On Good Friday of that year, March 21, a severe and destructive westerly gale blew the car ferry out of control up the Detroit River as far as the Belle Isle bridge. On the Canadian side of the river the force of the wind undermined a siding precipitating 13 Wabash freight cars into the water near the slip dock in Windsor, used by the Huron and her sister car ferries.

The old car ferry has, however, survived these minor mishaps now buried deep in the past. Since those days she has transported thousands of cars across the Detroit River and will likely carry thousands more. Her capacity averages 12 present-day high standard freight cars or five to six passenger cars. These numbers are less than for the Huron’s early days as a car ferry, because of the smaller-sized cars then in use.

Update: The Huron sank at her dock in Windsor on December 16, 1981.  Her cargo at the time were several cars full of dried beans and one car with some chemicals – which caused some concern until it was recovered with no spilling.