By Richard A. Belford

Gallant ships like gallant men have carved their names in history. This year a replica of the heroic Nonsuch, first ship of the Hudson’s Bay Company, visited Lake Ontario and the St. Lawrence River in commemoration of the Company’s 300th anniversary.

What a doughty little heroine the Nonsuch was — only 75 tons, 54 feet long and 17 feet, 9 inches beam. But mere figures are not enough, only deeds count with ships. 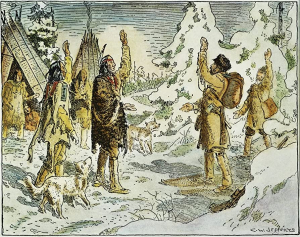 In 1666 Radisson and Groseilliers, intrepid wilderness explorers and traders, journeyed to London and persuaded a group of courtiers and financiers to underwrite a voyage to Hudson Bay, where they promised magnificent rewards in furs. Fired by the lure of such wealth, the London Adventurers fitted out two vessels, the Nonsuch and the Eaglet. On June 2, 1668, the ships set out together.

During the voyage the vessels were besieged by a violent storm. The Eaglet was damaged so extensively that she was obliged to return to Plymouth. Alone, the little Nonsuch turned her bow toward the northwest and sailed on.

In early August, while “sailing N.W. by N. along the shear,” Captain Zachariah Gillman of the Nonsuch saw “many islands of ice, some very great and some small ones.”

It was not until September 29 that the Nonsuch reached a river emptying into the southeast corner of James Bay. This river Gillman and his companions named the Rupert in honor of Prince Rupert, one of the backers of the adventure. The crew carried their provisions ashore and built a house of upright logs caulked with moss, and named the place Fort Charles in honor of the king. Here they spent the winter of 1668/69 trading with the peaceful Cree Indians of James Bay. The name “Fort Charles” was later changed to “Rupert’s House” as it is still known today.

The Hudson’s Bay Company has erected a cairn of stones on which is mounted a copper plate bearing the following inscription:

ESTABLISHED ON THIS SITE 1668

Up to that time only two vessels had previously visited James Bay.2 Henry Hudson explored the area in 1610/11 and wintered somewhere in the area of the Rupert River. The following spring his crew mutinied and set him, his son and seven crewmen adrift in the bay. They were never heard from again. Captain Thomas James, for whom the bay is named, came in 1631/32 and spent the winter nearby on Charlton Island.

However, it was the explorers Radisson and Groseilliers who recognized the great potential harvest of fur-bearing animals of the region and brought it to the attention of the English merchants.

The following account of the return of the Nonsuch was published in the London Gazette of October 11, 1669: “Last night came in here the Nonsuch ketch, which having endeavored to make out a passage by the North-West, was in those seas environed with ice, which opposing her progress, the men were forced to hale here on shear and to provide against the ensueing cold of a long winter, which ended and they returned with a considerable quantity of beaver, which made some re- commence for the cold confinement.”

“Some recommence” amounted to furs valued at 19,000 pounds which, in that day, was considered such a successful voyage that a charter was granted by Charles II, on the 2nd of May 1670, to the Governor and Company of Adventurers of England Trading into Hudson’s Bay. This is known today as the Hudson’s Bay Company, often referred to in Canada as “The Bay.” 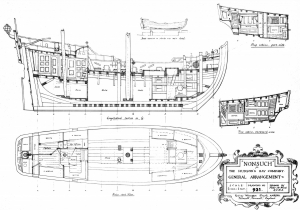 As one reads over the specifications of the Nonsuch, he is reminded of how very similar she was to LaSalle’s Griffon, which was built in 1679 on the Niagara River. Both vessels have approximately the same tonnage, length and beam. Though the Nonsuch was the product of a British shipyard and the Griffon was whipsawed from a nearby frontier forest, they were “sisters under the skin.” A close look at the new Nonsuch will give those interested in 17th century shipbuilding a fascinating glimpse into a bygone era. 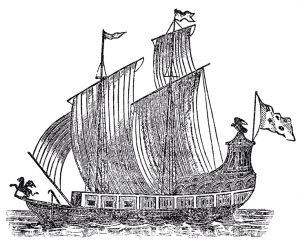 The Hudson’s Bay Company has gone to infinite pains to build the full-sized replica of the Nonsuch as near perfection as possible. The builder chosen was J. Hinks & Son Shipyard at Appledore, Devon. In preparing the design, Rodney Warington Smyth, a naval architect and managing director of the Falmouth Boat Construction Limited, Falmouth (Cornwall), took months of research. He gained his information from Hudson’s Bay Company Archives, 17th century models and paintings, and accounts of shipbuilding techniques housed in the National Maritime Museum at Greenwich, England. Plans and specifications were then prepared and approximately five months of research and development came to an end. Every detail of the ship had been drawn, even to the carvings on the stern and the six-foot anchors with their wooden stocks.

The carvings which decorate the Nonsuch from bow to stern were done by Jack Whitehead, an artist from the Isle of Wight. The instructions called for the carving of lion masks, two life-sized crouching clogs, a magnificent stern decorated with two infant cupids amid foliage, and a number of nude female figures. The justification for the latter is based on an old maritime superstitution to the effect that, by removing her clothes, a woman could calm the stormiest of seas!

In the spirit of historical accuracy, no synthetic fibre, no brass eyelets, no machine-stitching and no wire was used to make the sails for the Nonsuch. Instead, hemp, canvas and sewn eyelets were used to give a centuries-old air to the little ketch. The Lucas Sail Loft of Portsmouth, England, carried out this unique assignment. The best quality of Navy flax canvas woven in Scotland was used for the sails. According to a news item printed in the local Portsmouth paper, “Sail makers and apprentices have relished this change from sails of modern synthetic material. But the striking thing about the finished product is how little things have changed over 300 years.” 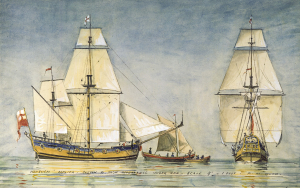 Replica of the NONSUCH

The building of the vessel called for the revival of old skills now rapidly passing out of use. Some of the tools needed could no longer be found and replicas had to be made from originals in the National Maritime Museum. The woods throughout the entire hull were English oak and elm. No laminated woods or plywoods were used.

However, there is a little of the 20th century incorporated into the finished ketch. The ship has been given a coat of anti-fouling paint, she has an electrical supply system and it is equipped with a 100-horsepower diesel engine to help her maneuver in and out of port. In addition, she has an up-to-date galley.

The new Nonsuch was launched on August 26, 1968. When she was put on display in London, she was visited by an estimated 17,000 people.

In April of 1970 the Nonsuch arrived in Canada after crossing the Atlantic on the deck of the SS Bristol City. Although the little ketch had proven herself to be most seaworthy, the Hudson’s Bay Company decided against a crossing under sail because of the time factor — approximately two months would have been involved.

This summer, starting at Montreal on the 1st of June, the Nonsuch began a fourteen-week tour of a number of cities along the St. Lawrence River and into Lake Ontario, her last stop being at the Toronto Exhibition from August 19 (P. M.) to September 7.

The Nonsuch will eventually be taken to Winnipeg, Manitoba, Canada, where she will form the nucleus of a transportation section in the Manitoba Museum of Man and Nature. There she will be permanently exhibited for future generations to see.

About the Author: Mr. Richard A. Belford, with the Marine Department of the Sherwin- Williams Company, Cleveland, Ohio, is a member of the Great Lakes Historical Society. He has written before for INLAND SEAS and is particularly interested in photography related to the Great Lakes area. Mr. Belford’s attachment to the Great Lakes began when he spent two summer vacations aboard the Amasa Stone, as an oiler, in order to supplement his income during college years.