For 90 years seamen, boatmen, and fishermen have been ably assisted in times of trouble by the Marblehead lifesaving crew. The reefs and shoals in the western end of Lake Erie have been the scene of heroic rescues. That area of northern Ohio on the treacherous freshwater sea requires the skillful protection of lifesaving service.

The most dangerous place in Lake Erie is in the neighborhood of Point Pelee, near the western extremity of the lake. Off the point lies, like a satellite, Point Pelee island; between the two is a shoal. Point, shoal and island cause many wrecks each year.1

Even the scarce and incomplete records about local shipping casualties for a ten-year period, between 1867 and 1876, recorded 19 strandings in the area, with five at Cedar Point, six at Kelleys Island, two at Marblehead, three at Middle Bass Island, two at North Bass, and one at Put-in- Bay.2 In addition to these statistics, some serious disasters must have supported the claim for lifesaving service at Marblehead. On November 5, 1862, five lives were lost when the Monarch capsized there,3 and on May 1, 1875, five persons perished when the Consuelo capsized.4 The Marblehead Life Boat Station had its initial start on June 20, 1874, when the U. S. Congress authorized the establishment of a lifeboat station at Marblehead Point, on the coast of Lake Erie.5 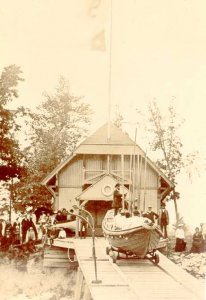 The site selected for the first Marblehead lifeboat station was located in the village of Marblehead, a short distance from Lakeside. By authorization of an Act of Congress on March 3, 1875, the Secretary of the Treasury acquired a deed to the property in Danbury Township, Ottawa County, from John H. James, Jr., on June 24, 1876.6 Construction of the station started early in the spring, but an objection to the site by John H. James, Jr., caused a brief delay. Mr. James thought the station should be located farther east beyond the Marblehead Lighthouse.7 After further study, the Secretary of the Treasury authorized Klam Schwartz and Company to complete the construction on the site purchased by the Government.

The first station at Marblehead followed the standard plans and specifications for stations which called for the building to be adapted to the site. The exterior architecture of these standard government plans was a so-called “chalet style.”8 The station was a typical two-story building

built of tongued and grooved pine, with gable roofs, covered with cypress or cedar shingles, and strong shutters to the windows, and are securely bolted to a foundation of cedar or locust posts, sunk in trenches four feet deep.9

The dimensions of the building were about 42 feet long by 22 feet wide and 24 feet high from base to peak. The first floor had three rooms. The largest room, approximately 12 by 40 feet, provided space to house the lifeboat equipment. The boat room faced the coast with double-leaf doors opening onto a ramp. The smaller first floor rooms provided separate space for the keeper at the southwest corner of the building and a room for the eight-man crew at the southeast corner. The second floor provided space for sleeping quarters and smaller equipment. The total cost for the station was about $4,500.00.10 The equipment included anchors, grapnels, axes, shovels, boathooks, wrecking tools, cots, preservers, pikes, and lines.

The lifeboat was the most important piece of lifesaving equipment. The first boat used at Marblehead was an American adaptation of the British boat developed a century earlier. This boat was a 25-foot, 3-inch surf boat, named Retrieve, which was built by D. Blackburn of New York City. A 24-foot, surf-like “Dobbins boat,” named Diadem, was placed at the station on June 27, 1884, which was built by Kingston & Son of Buffalo. Kingston also built a 24-foot, 1½-inch Dobbins lifeboat which was placed at the station on February 16, 1894. On September 2, 1894, a standard service lifeboat built by Wolverine Dry Dock Company was issued to Marblehead station.11 In October 1966, the station received a 44-foot rescue boat which replaced a 36-foot boat.

The éprouvette mortar was first introduced into the service at Marblehead.13 This was used to shoot a line to a vessel when the lifeboat was unable to reach a ship in distress. The mortar weighed 288 pounds, and it had a range of 421 feet. Today the crew uses the Lyle gun which is fired by igniting black powder from 32-caliber blanks or fuse wicks. 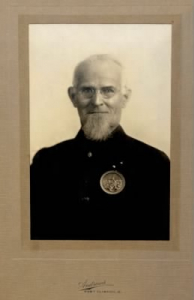 The station was officially opened in September, 1876. Lucien M. Clemons was appointed keeper on September 9, 1876, and he took the oath of office on September 30, 1876.14 From the start of the service, all appointments were made on the sole basis of merit and fitness without reference to political party affiliation.15

The operation of the station was governed by a carefully devised code of regulations designed for efficient lifesaving service throughout the country. These regulations required the station keeper to maintain a daily journal or logbook, in which he entered the weather and carefully prepared reports of disasters occurring in the precincts of the station.

The regulations contained minute directions on the course to pursue in regard to shipwrecks. There was also a prescribed procedure on how to care for and shelter rescued victims, and how to protect property in case of a disaster.

Life at the station was also controlled by the regulations of the service. Each day there were prescribed duties to perform, such as cleaning and “airing” the station, drills and exercises, and recording surf conditions and weather. The storage of ropes, lines, anchors, and other items followed strict methods to facilitate emergency use, and to utilize space to the best advantage, During the navigation season patrol duty was scheduled constantly. The night patrol, from sunset to dawn, was divided into three watches. Two men kept each watch.16 The crew was required to have weekly drill in using the breeches buoy. This was held every Thursday afternoon. The simulated mast of a vessel was set up at the end of the pier near the station with ropes connected to a crotch erected on the shore. At Captain Clemens’ command, “Action!” the crewmen brought one of the crew ashore by using a double pulley-block at the end of the hawser behind the crotch. The entire exercise had to be completed within five minutes.17 Some Marblehead residents and Lakeside tourists may still recall the Thursday drill at the station. The impressive practice drew large crowds, and it was a popular scene on postal cards.

The station was well equipped and well manned, When the alarm was sounded the crew met the demands of the emergency; the alarms were reported by several means. A code of signal communications was adopted about 1878. The stations along the Lake were linked by telephone and telegraph communications about the same time.18

Examples of early rescue operations were described in the station records. Late in the navigation season, a northwestern gale struck Lake Erie on November 19, 1879. The 40-ton scow, C. Rich, of Detroit, which was bound from Sandusky, Ohio, for Port Huron, Michigan, broke her chains near the station about midnight. The small vessel beached before the lifesaving crew could reach her. The crew of the disabled vessel was rescued and brought to the safety of the station by a line.

As soon as this operation had been completed, the New Hampshire, a Detroit schooner of 94-tons, bound from Sandusky, Ohio, for home port, was seen coming ashore. Captain Bronty attempted to land a small boat, but the gale forced him into a “Dangerous situation of imminent drowning.” Three of the Marblehead crewmen waded into the breakers, and dragged the small boat to land. Three sailors on the disabled schooner were rescued by a line thrown to the vessel.

Before the lifesaving crew could leave the beach, the 679 -ton scow, J.A. Saunders of Port Huron, Michigan, bound for Huron, Ohio, dragged her anchor and stranded near the other vessels. The lifesaving crew recovered the anchor, and placed it firmly — to hold until the vessel could be heaved off.

The brief description of the rescue facts do not give the details of the difficulties the lifesaving crew encountered in working in the darkness, buffeted by howling wind, a freezing spray, and a snowstorm. The C. Rich and New Hampshire were total losses, but the J. A. Saunders’ loss was $200.00, and about $600.00 was saved in the value of the vessel. Most important, 11 lives were saved. These rescued victims were given shelter for three or four days at the station.19 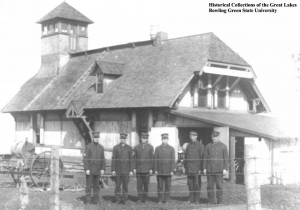 Heroic rescue and search operations have been performed year after year. The techniques for saving life and property have changed with the passing years, yet the lifesaving service at Marblehead today is similar to that of 90 years ago. The crewmen still have drills, patrols, and careful maintenance of equipment.  With the improved navigation methods, the lifesaving crew is seldom called upon to go to the aid of the large lake carriers. The seven lifesaving stations between Cleveland and Detroit (Cleveland, Lorain, Cedar Point, Marblehead, Put-in-Bay, Toledo, and Detroit) answer many distress calls from the amateur boatmen, The Marblehead station is the third largest operation of these stations. Detroit is the first, Cleveland the second. About one-third of all calls occur in the Lake Erie Island area near Marblehead. The majority of the three hundred calls received come from the operators of small boats, and, in particular, from outboard motor boats. The common trouble ranges from dirt in the gas tank to carburetor failure.

The lifesaving service today is under the U. S. Coast Guard which, incidentally, celebrated its 176th birthday on August 4, 1966. An Act of January 28, 1915, transferred the U.S. Life-Saving Service, which had been under the Revenue Marine Division of the Treasury Department, to the Coast Guard.20 The Coast Guard has more duties than those assigned the Life-Saving Service. Today it enforces customs and navigation laws, supervises the anchorage and movement of vessels, reports marine casualties, saves and protects life and property, and since 1942, installs, maintains and operates lighthouses, lightships, buoys, and other aids to navigation. The jurisdiction of the Coast Guard, as prescribed in the various titles of the U. S. Code, is highly complicated, the regulations having been enacted piecemeal over the years.

The future improvements at the Marblehead Coast Guard station will be in keeping with long-range budgetary plans for all shore units. The number of men at Marblehead will be “substantially increased.”21 The present station built in 1921 will be enlarged to accommodate the additional crew. Last year the Coast Guard considered making Marblehead a headquarters unit, but the plan was changed.

The crewmen at the Marblehead station carry on the gallant tradition of the crewmen of the former Life-Saving Service. The local conditions and navigational dangers may have changed over the passing 90 years, but the courageous, vigilant, and efficient protection of life and property in this area is still a very vital service.

About the Author: Mr. Merlin D. Wolcott is Librarian of the Canton Public Library at Canton, Ohio. Among his special interests are the local history and the genealogy of the Marblehead Peninsula, particularly as his own family, in 1809, were the first Americans to settle in Ottawa County. Mr. Wolcott has written earlier articles for Inland Seas and for genealogical journals.