With east-west length of four and two- thirds miles, by almost a mile and one half greatest breadth, uninhabited John Island rises to 250 feet in Georgian Bay’s North Channel, twenty miles east of Blind River, and the same distance west of Little Current. It appears to have remained unnamed and unnoticed until a stolen sawmill was unloaded at the harbour near the eastern end. Milelong Aikens Island stretches east and west across its entrance and makes it a perfectly sheltered basin. A four-fathom channel enters it from the north, and a fourteen-foot channel leads in from the east. This suited the needs of a lumberman named John Moyles, who conspired with his three brothers, George, Bart and Jim to steal a sawmill from Detour, Michigan, then towed it across the international boundary and re-erected it at what is now called Molles Harbour. It remained in operation for over twenty years.

In 1890, or thereabouts, the four Moyles brothers, whose home was in Saginaw, Michigan, built a large well-equipped sawmill at Detour, but when it came to securing their raw material, the logging and other operating expenses were so high that they were soon in financial difficulties. The owners of the timber limit advanced them more capital so that they might increase the capacity of their mill, and they bought new machinery, but still operated at a loss.

Bart Moyles was a clever and none too scrupulous lawyer, and devised a plan whereby he and his brothers could save their mill from being taken over by the creditors. They planned to steal their own mill, and transport it by water to Canada. Elaborate preparations were made to carry off the sawmill at the time of the spring break-up. Tugboats and lighters were brought up Lake Huron from Saginaw to Detour, under pretense of taking back lumber cargoes, but, to the surprise of their crews, were tied up at the sawmill instead of the lumber wharf. Meantime, every bit of the mill machinery was being dismantled behind closed doors within the mill walls, although two watchmen had been deputed to protect the interests of the Alpena firm which had financed the improvements. Artifice was used to circumvent them.

Putting a bottle of liquor where one of them could find it was all that was necessary to render him hors de combat. The other watchman was more difficult to handle, but the conspirators got him out of the way by having a man rush in about 6:30 P. M. and tell him that his wife was about to give birth to a baby, and that he was wanted at home forthwith. He left on horseback but the horse had been doctored so that it would become ill on the road. As a result the watchman was forced to walk the final seven miles. He arrived exhausted to find his wife in good health. Suspecting nothing, he waited until morning before beginning his return to Detour. 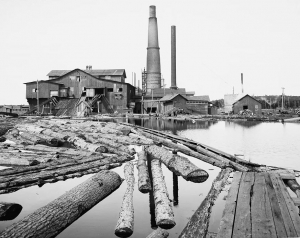 Meanwhile, after both watchmen had been disposed of, the mill crew and tug crews united their efforts and lost no time in loading the machinery and mill frame on the two large lighters. Everything was loaded, including engines, boilers, tramways, jack-ladder, lumber, trucks and all equipment. Even the nails that held the siding were taken, and the total value of the property, outside of real estate, left at Detour did not exceed five dollars. By 1:30 A.M. everything was on board the two lighters, the tugs had steam up, every person was at his post, and the convoy got under way. When morning dawned, the convoy was about seven miles from Detour, fiercely battling the drift ice. About 4:30 P. M. it crossed the international boundary, somewhere in the vicinity of Whiskey Point, St. Joseph’s Island, and was safely in Canadian waters.

When the watchman returned to Detour, he quickly found that the large sawmill and all its trimmings had disappeared, although the tugs and their lighters were still in sight. He rushed to the telegraph office to wire his chiefs at Alpena, and the sheriff at Sault Ste. Marie, Michigan, but discovered the wires had been cut. Next day the sheriff caught up with the runaway sawmill. John Moyles was captain of one of the tugs. He feared the sheriff might try to get a line aboard the lighter he was towing, and attempt to pull it back across the international boundary. Seizing a rifle, he strode to the stern of his tug, and in a loud voice warned the pursuing sheriff that if he attempted to board any part of his fleet he would drill such a hole through his body that his friends would be able to see next Christmas through him, and that his heart might fall overboard, and be separated from his body for a considerable period. The result of this hostile demonstration was that the frustrated sheriff returned to Sault Ste. Marie without accomplishing his purpose.

The little pirate fleet remained imprisoned in the ice by an onshore wind for three days. The wind then changed, and the ice moved so that the two tugs and their lighters were able to proceed north through Worsley Bay, and then through the western part of the North Channel, calling, but not tying up at Thessalon and Blind River.

No trouble was experienced with the Canadian customs officials, and the stolen sawmill, after a few days was re-erected by willing hands at Mailes Harbour, on John Island.

Two and one-half to three fathoms was ample depth for schooners and steam barges to tie up at the lumber wharf that was constructed. Two parallel lines of cribwork, with room for schooners to proceed between them were next built a short distance eastward, in Mailes Harbour, to provide additional piling space.

One of the two tugs was used to tow lumber-laden lighters from the mill wharf to the cribwork, besides assisting schooners during their arrival and departure. Schooners chose either the northern or eastern entrance to make best use of the breeze that was blowing. The remaining tug was employed to bring log-rafts to the mill through the north channel. The cribwork, as well as the wharf, remains to be seen by visitors, and both appear in the accompanying air view of Mailes Harbour. The daring and successful exploit of stealing an entire sawmill intrigued the hundreds of bush workers along the North Channel, and they found delight in recounting the story of the stolen sawmill to the crews of tugs whenever they arrived to tow log-rafts to the sawmills on the southern shore of Georgian Bay.

It would form an agreeable close to this story to state that John Moyles and his three brothers finally achieved financial success with their sawmill in Canada, after being dogged by failure in the United States, but the facts are otherwise. After operating their mill on John Island for a number of years, they sold it to Guy Multhrope of Bay City, who had been operating along the Onoping River, west of Sudbury. Multhrope then remained in possession of the sawmill until he retired from lumbering, due to depletion of the timber limits.

On Sunday, April 17, 1918, this historic sawmill was totally destroyed by fire along with the other buildings in its vicinity. Since then, John Island has remained uninhabited, except for a few Indians who camp on it during the summer in order to fish.

In one thing John Moyles was successful beyond contradiction, and that was in giving his name to an island over four miles long in Georgian Bay. A number of islands commemorate Royal Navy officers, but in the whole world there is only one island that honors a man who stole a sawmill. His name was John.