Each spring since 1948, Imperial Oil has made an aerial survey of the Great Lakes to discover what ice conditions exist, and then to make some estimate of how soon their ships can move. Often, several such flights are made to see how ice conditions have changed with differing wind and weather. 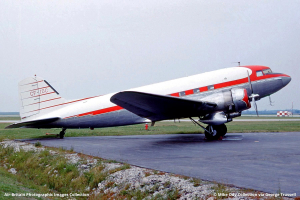 This year the company’s CF-IOC, a modified DC-3, took off from Toronto International Airport on April 2, lifting into the bright sun of the morning. Aboard were Captain J. W. Davidson and D. L. Harper, of the Marine Division staff, and at the controls were pilots Clark Ready and Lloyd Stewart, with Charles Foster as flight engineer.

The aircraft landed at Sarnia, where port superintendent Captain F. C. Smith and Captain James Burns, who will command Imperial London this season, boarded. Both are veteran lake masters.

Imperial has been carrying benzene to Bay City from Sarnia —could a ship get through? Finding the answer was one purpose of the flight. The lower end of Lake Huron was choked with ice, but ships had been moving through it. The air observers soon spotted the U.S. Coast Guard’s Acacia leading the S. T. Crapo toward the St. Clair River.

As the aircraft turned into Saginaw Bay, open water could be seen to the north. The bay, however, was ice covered. The answer to the Bay City trip was “No.” The plane headed for the St. Clair River. 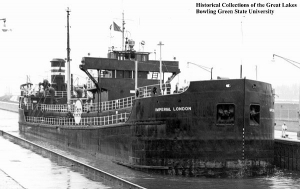 In the river lay Imperial Cornwall, at anchor and awaiting the passage of larger ships before Tackling Lake St. Clair. She had made one trip to Windsor on March 16, but was buffeted by ice up to 18 inches thick and 55 mph gales on her return. The Coast Guard’s Bramble and Acacia struggled for most of the day to free her from the moving ice on Lake St. Clair, succeeded, and she returned to her home port of Sarnia.

There was still ice in Lake St. Clair, but the St. Clair and Detroit rivers were largely open. And on Lake Erie, northerly winds had cleared the north shore, but ice was visible to the south, becoming heavier to the east. Off Port Colborne, entrance to the Welland Ship Canal, a four-mile plug of ice sealed the Lake to shipping. Inside the canal, up-bound ships were waiting impatiently to move.

(The next day the Canadian Coast Guard vessel Simcoe found ice 20 inches to three feet thick and failed to open a passage.)

That answered the question: Could a ship get through the Welland Canal? Perhaps not until warmer weather, rain, or a northeast gale have done their work.

Lake Ontario was ice-free as the DC-3, airspeed 200 mph, winged over it. Charlie Foster served sandwiches and coffee as the ice observers relaxed in the comfortable seats and settees, and a pack of cards appeared. The flight was smooth — in contrast to the buffeting experienced on most “ice flights” — and the visibility excellent.

At the end of Lake Ontario a seemingly solid mass of ice below the Duck Islands barred passage. “Nothing has been through that,” said Jim Burns. 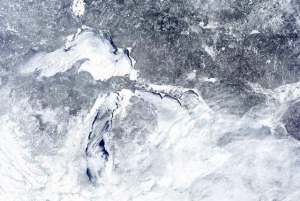 Could a chartered ship make a delivery to Kingston? Again, the answer was “No.” Ice in the harbor had started to melt, but the harbor approaches looked solid, and a vehicle was seen crossing the Bay of Quinte ice.

To a layman, all ice seen from the air appears to be much the same kind, but not to the experienced observers. Having battled it in ships, they have an uncanny ability to tell whether it is hard, rotted, rafted, and can form a good idea of its probable thickness.

No attempt was made to view ice conditions in Georgian Bay or the approaches to Lake Superior, for reports from the bay indicated that no shipping activity could be expected before April 15, and Lake Superior was heavily covered with ice.

Flying back along Lake Ontario’s north shore, the snow-covered ground bespoke a long, hard winter. The Trent River was open, but the lakes to the north wore a solid coat of snow and ice. Six hours after take off, Clark Ready set CF-IOC gently down on the runway of her home base and the ice reconnaissance ended.

About the Author: Mr. Gordon R. McKean is editor of Imperial Oil Fleet News, quarterly journal published by and for the marine personnel of Imperial Oil Limited to better acquaint them with their company and with each other.

We are pleased that this timely article was written by Mr. McKean after he had seen but one issue of INLAND SEAS.