Not all maritime disasters occur at night after days of fighting gales, with seas breaking over the rail until the proud ship is finally destroyed on some uncharted reef. Many times disasters occur during the day, within harbor limits and even feet away from a city’s main streets, with comparatively little damage to the ship. 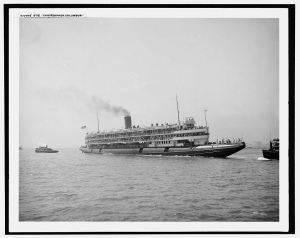 CHRISTOPHER COLUMBUS under two with tugs at either end.

In Milwaukee, on June 30th, 1917, the Christopher Columbus was less than five blocks from her docks when she met with disaster. This vessel, a whaleback, was one of the largest excursion ships in the world at that time. She was built for the World’s Exposition held in Chicago in 1893, was 362 feet long and shaped a bit like a cigar. She was designed to make 20 miles an hour and could handle up to 4,000 passengers.

It was Saturday afternoon, June 30th, 1917. The First World War was making headlines throughout the nation. People were talking about the War, politics and the daring new one piece bathing suits without stockings that were sure to be the fashion. The Christopher Columbus was docked in Milwaukee near the East Michigan street bridge waiting the return of her passengers. It was a pleasant day with temperatures in the sixties. Warmer weather was predicted, with a chance of thunder showers. Most of the passengers were students from Illinois colleges who were having a last fling before returning home for the summer recess.

The Christopher Columbus was scheduled to leave for Chicago at 4:30 P. M. She would be towed stern first down the Milwaukee River to the junction with the Menomonee River and there, would be turned about to proceed out of the inner harbor to Lake Michigan. Captain Charles Moody was her skipper and had been in charge of the “pig” for the last 13 years. He had skippered other large steamers for 16 years prior to that. Also, much earlier Moody had been captain of a tug in Milwaukee and he knew the area like the palm of his hand. 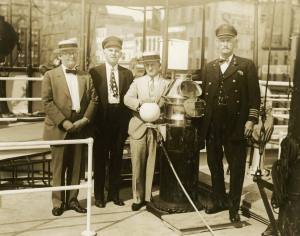 Captain Charles Moody, on right, on the deck of the CHRISTOPHER COLUMBUS

Captain Moody thought the water level looked unusually high and he wondered if there would be any trouble clearing the bridges that lined the river. He sent his second officer to ask the captains of the tugs Welcome and Knight Templar to proceed slowly down the river. The captains nodded their assent and the second officer returned. It was now 4:30 and the ship was ready to get under way. She was carrying 413 passengers, 139 men and 11 officers.

The tugs maneuvered to their positions. Captain F. C. Maxon of the Knight Templar took charge of the Christopher Columbus’ bow while Captain John McSweeney of the Welcome took the stern line. Alternately the tugs would pull and push until the Columbus was positioned midchannel.

The tugs were now ready to tow the ship downstream to the junction. In this maneuver, the tug with the after line would pull the ship’s stern west, almost to the railroad bridge. The tug with the forward line would then let go of the ship, allowing the river current to swing her around. Then the tug would take the starboard forward line and continue the tow to the Lake.

While the passengers were waiting for the tugs to pull the ship to the junction, they swarmed about the upper decks to find the best place to wave goodbye to Milwaukee. They were laughing and shouting, waving to the people watching from the windows of nearby office buildings. Some of the passengers had gone below to the red carpeted restaurant, but by far the majority were out on the upper decks.

Captain Moody was on the bridge with his helmsman James Brodie. They signaled for the bridges to open. The passengers held their ears each time the booming whistle of the Christopher Columbus rang out and a few, looking into the dirty river water, thought how unpleasant it would be to go for a swim in the muck.

The vessel was now near the junction and would soon be swinging toward the railroad bridge. On the east side of the river the passengers could see the large water tower used for the Yahr-Lange Drug Company fire sprinkler system. As scheduled, the Knight Templar cast off the port bow line and proceeded past the bow of the Columbus in preparation for getting hold of the ship’s starboard line. 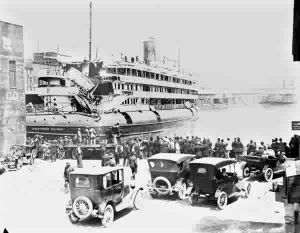 The current of the rain swollen river was quite swift. So swift that the bow of the Columbus began to move too quickly in the direction of the Yahr-Lange water tower! Moody sensed that the ship might collide with the dock because the tugs didn’t seem able to check the swing of the ship. As the vessel continued to swing further and faster, Moody grabbed his megaphone.

“Get back!” he shouted to the large crowd standing on the forward decks. His orders went unheard by the happy crowd. He called again but still no one paid any attention to him.

Moody ordered Brodie to put the wheel to starboard. The boat still continued to swing toward the iron structure that held the water tower over 100 feet in the air. Moody rang for the engines to be reversed “full speed” to help check the movement of the ship. This action threatened to drive the stern of the ship into the railroad bridge but Moody would rather risk that than have any of his passengers injured.

As yet, the passengers were not aware of the perilous situation. They were still gaily laughing and waving to the spectators on shore. In a few seconds Captain Moody would be involved in the worst accident of his sailing career!

Charles Oglka, the Christopher Columbus’ second mate, rang the alarm thinking the ship was sure to strike the railroad bridge. But such was not the case. The port bow of the ship struck one of the supports holding the water tank. The supports snapped like pretzels, breaking the entire structure about twenty feet from the ground! One of the supports bolted to the drug building tore loose, leaving gaping holes in the walls.

The huge tank cascaded down and struck the forward port side of the ship, crushing bodies, throwing water, timber and metal all around the area! The metal structure crashed down on the wheelhouse just missing Captain Moody! It made a large hole right where helmsman Brodie was standing. The ship rocked as if about to capsize. All in the area were drenched to the skin from the water of the tank. Passengers were thrown into the river by the sudden jolt. Some panicked and jumped into the river.

Women screamed. On the deck where the tank hit there was a mass of mangled bodies. One spectator described the sight of a woman who “had her head mashed into jelly.” Parts of bodies were lying about the decks amid strewn glass and broken timber. Chairs, benches and tables were splintered and scattered every which way. The wheelhouse was demolished and a 12 foot hole was smashed into the deck just above the restaurant.

Captain Moody had jumped to the starboard entrance of the wheelhouse and suffered only slight leg injuries. Helmsman Brodie escaped through the port doorway and was found by Moody holding his head in his hands.

Just then someone yelled, “Man overboard!” Moody ordered his men to launch the lifeboats. The nearby Milwaukee fire tug spotted the accident and sent her crew over to lend a hand. Other small craft rushed to the scene to assist. One of these was the Paul D, a boat that supplied meat to the ships in the area. 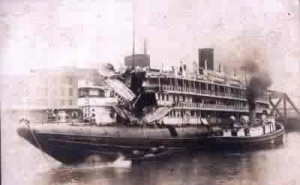 Many persons were being pulled out of the dirty water. One of these was a man who had lost his leg in the accident. There were many acts of heroism with some of the swimming survivors pleading to the rescuers to go to the aid of those more in need of help. Life preservers were thrown to these swimmers to help keep them afloat until they could be picked up by the rescue craft.

On the ship, the crew was prying victims from the wreckage. Some of the passengers were merely scared, scratched or otherwise unhurt. Others had broken bones, torn limbs or were dead.

The Coast Guard and police were summoned. Dragging operations were started when they arrived on the scene and seamen from other ships came to volunteer their help. The Emergency Hospital was told of the accident and they immediately called out for volunteers to help with the dead and injured. At least a dozen doctors appeared at the hospital while six others were on hand to help at the scene of the accident.

Ambulances and taxicabs were pressed into service and helped to transport the dead and injured to the hospital or morgue. To get the bodies to the vehicles, the Paul D had to ferry them across the river. By the time this was finished she was covered with blood.

More than a hundred policemen were detailed to keep the huge crowds from hampering rescue activities, for as the word spread, curiosity seekers rushed to the scene by the thousands. Police had to be stationed at the morgue and hospital to keep control of the morbid spectators.

The Red Cross arrived quickly on the scene. Workers busied themselves sending telegrams to next of kin and helped survivors send notes to relatives so they would not worry.

All night long the Coast Guard dragging operations continued. They had been dragging since 5 P.M. and they would not be able to rest until the next evening. The purser could not account for about 45 persons and there was fear that they might still be pinned under the wreckage that fell into the water. Many of the persons had been saved but merely failed to report in.

Of the 413 persons aboard the Christopher Columbus, 16 had been killed and 20 seriously injured. Many of the passengers were so thankful to get away from the scene that they immediately bought train tickets for Chicago. About 300 persons were aboard the Milwaukee Road’s special run at 6:50 P.M., little more than two hours after the tragic incident. Others left on later trains, while some chose to remain in Milwaukee to be with injured friends.

The damage to the Christopher Columbus amounted to about $5,000.00. She was sent to the dry dock at Manitowoc and was laid up for the rest of the season. She was put back into service the next year with Captain Moody in charge and continued to be a popular excursion vessel until 1930. Moody remained as skipper of the “pig” until he was in his eighties.

In 1936 the Christopher Columbus was scrapped and the metal from her was sold to Japan. Oddly enough the booming whistle was retained and later put into service as the Manitowoc air raid signal. However, it has not been possible to find out what happened to the signal after it was finally retired from use.

2021 Editor’s note.  The Christopher Columbus whistle was donated to the Great Lakes Historical Society in 1973 and is now on display at the National Museum of the Great Lakes.

About the Author: Mr. James R. Ward is an insurance representative in Milwaukee, Wisconsin, and a journalist with the United States Coast Guard Reserves. He is a member of the Great Lakes Historical Society and of the Wisconsin Marine Historical Society, of Milwaukee.