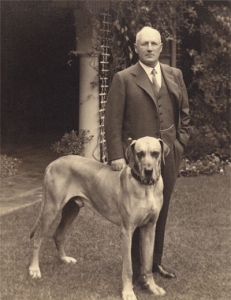 Charles Hallett Thorne was a sailor who particularly loved sailing and sailboats. But even greater was his love for his wife, Belle, and she preferred the stability and comfort of power boats. And so Charles, acquiescing to his beloved wife’s wishes, ordered the construction of a fully-powered luxury yacht that would provide for Belle’s every comfort.

The yacht, a steel-hulled sparkling white beauty, 148 feet long, was built for Charles by Bath Iron Works in Bath, Maine. The vessel began life as Hull #146, and was then named Halonia.

An Internet report says that in Native American, “halonia” means “happy fortune,” and it was used (rarely) as a name for a baby girl. But is that enough to inspire taking the word and turning it into the name for a big new yacht? Why Charles named his beautiful new yacht Halonia has long been a puzzle.

On June 15, 1931, Halonia was launched and delivered to her proud new owner, Charles H. Thorne (my grandfather). Charles was one of five sons of George R. Thorne, who co-founded retailing giant Montgomery Ward & Co. Charles subsequently became Montgomery Ward’s chief executive. The company was the source of his wealth, much of which went to educational institutions (Occidental College and Northwestern University) but also enabled him to own yachts like Halonia. Charity, education, boats and his home in Pasadena, California, were about the only outward expressions of his success and wealth, as he was a very private person.

During the 1930s, Bath Iron Works (BIW) built quite a large number of stately yachts. Among them was one of similar size and era to Halonia — Helene, BIW’s Hull #140, reportedly built for an executive of Ford Motor Co. She was apparently almost identical to Halonia. Although she bore an earlier hull number and the year of her construction is shown as 1927, she wasn’t launched until May 1931, just one month before Halonia was delivered to Charles Thorne.

Helene was reportedly later renamed, first as Welsh Princess and then as Caronia. To the best of my knowledge, Caronia is still active on the west coast. One report says that Caronia sank “off Ushant” in the mid-1950s, but this is unconfirmed and highly suspicious as not being the same Caronia.

Other reports in the record indicate that Caronia was seen in Ft. Lauderdale, Florida, in the late 1960s. Additionally, Halonia’s look-alike Caronia was often seen in the 1950s in California. But despite being suspiciously similar in many ways, Caronia definitely is not Halonia.

Charles’s son, Hallett, and his wife, Susanna Elizabeth, took delivery of Halonia in 1931 and made the maiden voyage up the St. Lawrence River (a series of channels that in 1959 became the St. Lawrence Seaway) to Les Cheneaux, Michigan. The name means “The Channels” in French. The area consists of a series of 36 small islands (some inhabited) located along some 12 miles of Lake Huron. The Les Cheneaux Islands were a notable summer playground for wealthy folks, mostly from Chicago, where Charles had a home.

While on the voyage, Elizabeth became a bit seasick and went out on deck for some fresh air. It was suggested that some champagne might settle her stomach. The butler, Graves (whose name sounds right out of Holly- wood) was dispatched to bring her some. From the main salon to the deck was a flight of three or four steps. Just as Graves was ascending the steps with a glass of champagne on a tray, Halonia gave a lurch and Graves lost his balance and fell backward down the steps. Elizabeth came to the top of the steps in time to see Graves getting to his feet. He held out the tray with the champagne glass, from which not a drop had spilled, and said, “Your champagne, madam!”

On Halonia’s fantail was a long padded seat which provided protection from the wind while still providing a good spot to view the passing scenery. It was a favorite place for the family to sit, wrapped in large heavy woolen capes to ward off the chill. Halonia was a summer toy. During winter months, Charles housed her in a boathouse at Les Cheneaux. Remember: Halonia was 148 feet long, so that must have been a huge boathouse. (Sources: family records and word-of-mouth, and also from Internet sources called “Yachtspotter” and “Suite 101.”)

Although Charles owned Halonia for several years, records do not indi- cate the year in which he sold the vessel. In order to sail on Halonia, Charles first had to travel from his home in Pasadena, California, to Les Cheneaux. Air travel was not as common back then, so Charles usually made the trip by train. It may be that he tired of making the long trip every summer. Whatever his reason, he sold Halonia to Ray Van Cleef, the well-known New York jeweler. The yacht’s history is blank from that time forward until March 1940, when she was secretly bought from Van Cleef by Montye MacRae on behalf of the Canadian government. Purchase price was $207,100. (Source: author Paul Robert Walker.)

This sale marked a major turning point in the story of Halonia.

In the earliest years of World War II, Nazi U-boats were spotted in the St. Lawrence River, threatening to enter the Great Lakes and attack ship- ping. Canada had to do something to stop the threat. One of the steps that nation took was to quietly acquire large yachts which could be refitted as small warships. 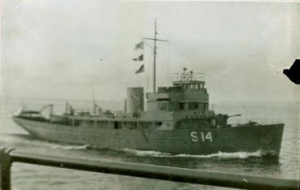 Halonia was one of 14 American motor yachts acquired in early 1940 to provide minimal anti-submarine protection off the coast of Nova Scotia, awaiting regular warships from the builder. Following its purchase by Canada, Halonia was re-named HMCS Raccoon by the Royal Canadian Navy. In late August 1940, still unarmed and painted gray, she was manned by ex-merchant seamen and inexperienced volunteer reservists. She was sent on patrol off Halifax to lend the appearance of a naval presence. Later that fall, a 3-inch gun was mounted on her foredeck, plus a simple asdic, a sonic listening device used to detect submarines. In the spring of 1942, she was assigned to a force of five minesweeper escorts to patrol the Gulf of St. Lawrence. Raccoon (nee Halonia) was commanded by Lt. Cdr. J. N. Smith, RCNR, and was assigned to protect convoys from Quebec to Sydney, Nova Scotia.

At 11:30 p.m. on September 9, 1942, convoy Q5-33 bound for Sydney, passed the reporting station at Father Point. There were eight merchant ships in two columns, escorted by the corvette Arrowhead and the minesweeper Truro off the port and starboard bows. Also escorting were two “Fairmiles,” 0-065 and 0-083. The Canadian Fairmiles were small, agile warships similar to the U. S. Navy’s Submarine Chasers. Raccoon was pa- trolling astern in the river channel, from which an attack might be made. Even though trouble was expected, the day passed quietly. Nothing could be done other than to keep a careful watch with the unreliable asdic (conditions for asdic were made unreliable by the mix of fresh and salt water). The night was dark and hazy, with visibility restricted to a half mile or less. There was a slight breeze and swell. Most of these ships did not have radar or voice radio capability. Arrowhead did, but certainly Raccoon did not.

Patrolling ahead of the group, probably submerged, was U-165 under the command of Eberhard Hoffman.

At hour 2110, the Greek steamer Aeas was torpedoed with no warning whatsoever. She sank quickly. Arrowhead altered course so she could illuminate the area with star shells to see if a U-boat could be caught on the surface. Arrowhead’s commanding officer reported that he saw no enemy, but did faintly see the gray profile of Raccoon searching in her expected station. Arrowhead picked up 29 survivors of Aeas from the water and from lifeboats, then returned to her station near the front of the convoy. U-165, having torpedoed Aeas, also altered course to keep up with the convoy, moving quietly, completely undetected.

At 12 minutes after midnight, two explosions in rapid succession were heard astern and to port of the ships. 0-065 was to report later that her bridge watch had vaguely seen two columns of white water and heard a short blast on a siren. This was probably Raccoon carrying out a depth charge attack on a possible contact. Since Raccoon didn’t ask for help, other ships did not divert from their positions to see what had happened and possibly perform rescues. Arrowhead swept astern, but nothing was seen or heard, so she returned to her station. Her commanding officer later re- ported that he was a bit surprised at not seeing Raccoon during his sweep. He presumed she had been further out in the river than she had been at the time he had last seen her, and under the circumstances, his assumptions seem reasonable.

By 0730 the next day, Arrowhead’s commanding officer became more concerned. Since he had to stay with the convoy, he reported by radio that he had not seen Raccoon and that she was not in sight. The base in turn signaled Raccoon, asking for an updated position report. There was no response.

During the U-boat’s attack, three ships in the convoy were seen hit by two torpedoes.

While the Greek steamer Aeas was sinking, Raccoon was struck by two torpedoes, tearing her apart in two closely-spaced thunderous blasts. Her entire complement was very likely killed at once.

No details of this attack by U-165 were recoverable, as Hoffman’s U-boat, believed to be on her way home, was lost on September 27 with all hands in the Bay of Biscay off the coast of France, where she was attacked by RAF aircraft.

An all-out search for the missing Raccoon was prevented when three more merchant ships from the same convoy were torpedoed near Cap des Rosiers. The corvettes HMCE Hepatica and Weyburn, the minesweepers Chedabucto and Vegreville, plus some RCAF aircraft, were sent to help and to search for the missing yacht. Nothing was seen.

All that was ever found of little Raccoon and her complement of 37 crew, some weeks later, was the body of S. Lt. Russ McConnell, a corner of the wooden bridge structure, some loose signal messages — and a life jacket with the name Halonia still partly visible.” (Source: “warsailors.com.”)

Halonia: Built out of love, destroyed out of war.

Regarding source data, much of the specific information was obtained from Internet postings, particularly in warsailors.com, which have since been removed.

About the Author: Charles H. Thorne II is the grandson of the Halonia’s original owner. Thorne is a 1956 graduate of Williams College and the father of seven daughters. Now retired, he is a resident of Kenosha, Wisconsin. His oldest daughter owns a 4-foot half-model of Halonia. Because the family’s ownership of Halonia was well before the author was born, much of this history was passed down by word of mouth. The war-time portion was researched on the Internet.