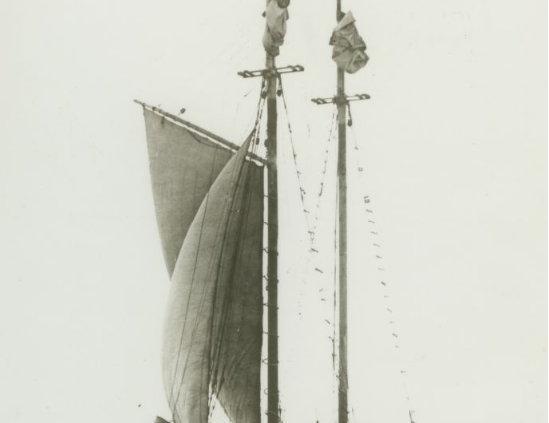 Few inanimate things arouse sentiment and excite the imagination as does the sight of almost any kind of ship. A gambler by the nature of her existence, a sailing vessel not only adds the spice of a special kind of romance, but commands admiration as she seems to flaunt her helplessness against the elements by reaching slender masts high, then dares to give odds by mounting canvas wide to the whim of the winds. Here is a paradox of sorts. Incapable of any maneuver by herself, she must constantly stand ready to defend against the caprice of the selfsame elements she depends on for her slightest progress. In the early days on the Lakes, before weather forecasts, every departure was a courageous adventure into the unknown. The challenge was all too real, for many vessels did not make good their destination.

Real or imagined, it was a rare thrill indeed to watch a seaworthy vessel in skilled hands as she waded into storms, violent squalls, or angry seas. She reeled under the punishment as she took the pounding, and often sustained damage; but far more often than not, she worked her way through to maintain her course. Such ships earned the highest esteem of many admirers in their day. It was with genuine sorrow that men watched the ribs of one of their past favorites bleach in abandonment on the shore; they experienced a feeling akin to grief when they heard the news of a valiant vessel’s loss. 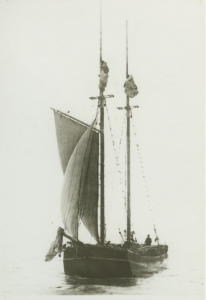 Even when docked with sails furled, the graceful lines of any schooner caused many a man to pause and look her over in admiration. But the chances that anyone ever fell in love with a schooner-scow at first sight are rather doubtful — she was just not built with the kind of lines that incite romance. It was not that she lacked curves in the right places, for, except for some sheer, she had no curves at all — period! Deck over an outsized cement mason’s mud box, add a jib-boom, a couple of masts, rudder and deckhouse, and the result will be close to the appearance of the average schooner-scow. Watching the cut-water form the bow wave of a schooner underway was a beautiful sight to behold; the cut-water of the schooner-scow ran the full breadth of the vessel. You take it from there!

When men grew sentimental over a schooner-scow — and they did —it was because of her character, for what she could do in spite of her build. Many men developed a deep and loyal attachment for schooner- scows, and well they might, for some of the owners of shipping lines and shipyards got their start with the lowly schooner-scow. The old scows did the best they could with what they had, and their best was mighty good by any standard.

There was little transportation worthy of mention on the Lakes prior to the War of 1812. Shortly thereafter, along with the conventional schooners, the simple scows made their appearance on the Lakes and served their purpose well enough to flourish in large numbers until the 1890s, when the growing efficiency of steam brought an end to the sailing vessel era on the Lakes.

Schooner-scows had the simplest construction of any sailing vessel built to carry freight. Their chief advantage was that they cost less, since they required less skill and labor to build, also, despite the fact that they had a shallow draft, they could carry more cargo than a schooner of the same measurements. Many variations of the scow were built, most were absolutely butt-ended, planked straight across the bow with no suggestion of a stem, others had bent bow planking and still others had a nearly conventional stem. All had straight sides, square chines, flat bottoms and centerboards. The one characteristic of all scows was that they were “gunnel-built” with few, if any, frames. The larger scows had additional reinforcement at the bow and stern.

In “gunnel-built” (gunwale) construction, driftbolts were driven edgewise through two or more side planks, thus they served not only to clamp the planking together under pressure, but the driftbolts also provided reinforcement against horizontal forces, eliminating the need for frames found in the construction of conventional hulls. The side and bottom planking of the average 60 foot to 90 foot scows was four inches thick. An auger was used to drill a hole edgewise through the planks to be joined together 1/16 inch under the size of the driftbolt to be used; an 11/16 inch auger for the usual ¾ inch driftbolt. Two men would stand on either side of the driftbolt and drive it home with spike malls. Once installed there was no removing the driftbolts, and with time they rusted, and became more firmly embedded. When properly installed, no amount of working of the vessel’s hull ever loosened a driftbolt. When repairs were necessary, they had to be cut off. 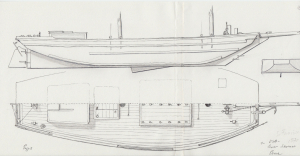 In place of the keelson1  (pronounce it kelson) found on conventional Great Lakes craft, the scow had “chine timbers.” These 6-inch or 8-inch- square stringers were the principal framing members of the hull, fitted along both sides of the bilge where the bottom met the sides. In all other respects the schooner-scows were built and rigged similarly to schooners of the same size. Their deckhouses afforded sufficient comfort for the families of many scow captains to vacation aboard when school was out.

Undoubtedly, most schooner-scows came into being because they were cheaper to build, or because skilled labor was not available. They were usually kept small to avoid the need for a large crew. Many were built in the 60- to 80-foot range that a two- or three-man crew could handle. In some areas shallow water or inadequate docking facilities made the scow a necessity. Since cost or skill was not the controlling factor, this is probably where some of the more elaborate scows were built. Shallow draft and ability to maneuver into narrow slips enabled them to reach small docks where the larger vessels could not go. They would carry barrels of food staples, such as salt, vinegar, flour, salted meat, and fish, also bagged grain, small cargoes of bricks, a hundred tons of coal, etc., to small settlements along the shores of the Lakes. 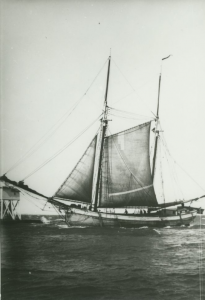 Except when beating to windward against a heavy sea, scows were considered nearly as fast as schooners of the same dimensions. On one occasion the Garibaldi set out with a cargo of coiled rope, barreled salt pork, and 4,000 bushels of corn. Shortly after departure she ran into heavy weather and took 13 days to beat from Chicago to Collingwood, a distance of about 570 miles. She fought through at less than 44 miles a day, but eventually she brought home the pork! The Garibaldi was built of oak at New Liverpool, Michigan, in 1869, and was documented at Detroit. She was 78 by 24.3 by 6.4, and 88.35 gross tons, 83.94 net. Owned for many years by J. B. Lozen of New Baltimore, Michigan, she was abandoned in 1901.

Scows made the most money for owner-captains who were traders. For example, the northern part of Michigan’s lower peninsula was good potato country. In the fall many scows would put into the area around Cheboygan for a cargo of potatoes, destined for a good market the scow captain would know about. On a smaller scale there were instances where the captain would buy a cargo of the produce of one locality and sell it at the best market he could find in another area.

The lumber trade offered them their greatest opportunity. They carried many a cargo of tanbark2  from the lumber yards to tanneries around the Lakes, principally Milwaukee, Sheboygan, and other Wisconsin cities. Scow captains would also bargain for odd lots of shingles or lath. When the mill had only a few layers of lumber left on a pile in the yard and wanted it out of the way to start something else, it would dicker with the scow captain for what it could get. 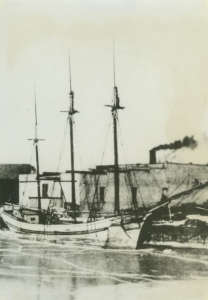 “Pilebottoms” on the loading dock were a good source of cargoes for the scows. After lumber schooners had filled the hold they would pile lumber on deck to a height of 12 to 14 feet. When the captain of the schooner felt the deckload was approaching the safe top-heavy limit, he would often line up 18 to 20 “dock wallopers” (which the lumber shovers were called) along the outboard side of the ship, then have them all walk across to the other side together. The captain’s buoyancy test indicated that the loading should be stopped when this comparatively small shift in weight had an appreciable effect on the trim of the vessel.3

When this left less than ten layers of lumber on the pilebottom on the loading dock, the labor cost of returning it to the yard made it more economical for the mill to discount it to the scowmen, on the condition that they load it themselves.

It has been suggested that on rare occasions, a scowman, stumbling through a lumberyard at night, might dislodge several layers of lumber from a pile, causing them to slide into the water, where an offshore wind carried them beyond the view of watchful eyes. Coming upon this driftwood later, the captain would realize that this constituted a menace to navigation, whereupon he would retrieve it and dispose of it for a suitable fee to compensate him for his effort! While some of this skullduggery did occur, it was very much the exception.

The two- or three-man crews of the captain-owned schooner-scows worked long, hard hours, many times every day in the week. Often they would work all day loading the craft, then get underway, alternating at the helm while the other(s) slept. Working for themselves, the harder they worked, the more money they made. The more energetic and most skillful traders often worked up to ownership of small schooners, and then up to larger ships with regular crews. Oldtimers often spoke of James Davidson as having started with a schooner-scow, a small one, handled by himself, one man and a boy who did most of the cooking. In later years, Davidson was to buy up considerable standing oak and build many sturdy wooden vessels in his shipyards on the Lakes. Captain Richardson and Alva Bradley are among other maritime leaders who are said to have been schooner-scowmen in the early part of their careers. The humble schooner-scow travelled with, and earned the respect of, the elite.

About the Author: Captain H. C. Inches needs no introduction to Great Lakes Historical Society members, being the Director of our Museum at Vermilion, Ohio. His long experience as a captain of Great Lakes vessels is supplemented by a lifelong interest in ship construction and be is the author of a book on the subject, The Great Lakes Wooden Shipbuilding Era, published 1962.

Mr. Chester J. Partlow, an active member of our Society, is Lieutenant Commander of District 7 of the United States Power Squadron, Contributing Editor to their journal The Ensign, and operates the USPS Public Relations Workshop. He is a resident of Canton, Ohio, and a frequent visitor to the Great Lakes Historical Society Museum.