The sun rose over the Capes of Sleeping Giant and Passage Island in Lake Superior with a sublime sense of the importance of that historic morning, July 11, 1959. Even in the dawning there had been a sweet anticipation pervading it all.

A gentle breeze fluttered the pennants of the fine freighter Fort York dressed for the occasion. The flags on shore installations fluttered free. The crowds gathered early along the waterfront where the Royal Canadian Mounted Police and the local constabulary were at their stations along the route that the Royal procession of Her Majesty Queen Elizabeth II would take. The stage was magnificently set.

There was a gentle hush, almost a listening, upon the waters. Then it happened! 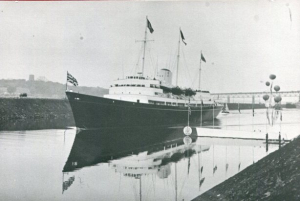 Like a silver sail on a silver sea gleamed H. M. Y. Britannia. As she entered at the foot of the Sleeping Giant, passed Passage Island Lights and steamed toward the breakwater, the Royal Standard flew from her masthead. In perfect formation followed her escort ships, Saguenay, Kootenay, and Ulster.

The sun was dancing over a silver sea as they passed Harbour Light. The log booms in the inner harbor bobbed gently on the surface as the Royal Yacht slowly passed through the welcoming lines of small craft. She passed across the waiting harbour, the flotilla following in her wake. The crowds cheered, whistles blew. How much of the historic character of this arrival was really appreciated in the exciting spectacle before us?

Slowly the prow of the Royal Yacht turned and steamed to her anchorage just beyond the breakwater. Her escort followed. It was a few short minutes later when the Royal Barge came skimming over the water to her mooring on the C. P. R. dock. 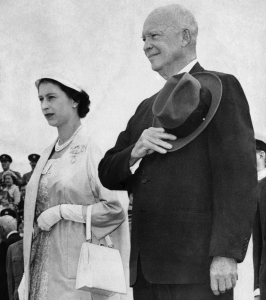 Queen Elizabeth II of England, and Prince Phillip stepped ashore beneath a canopy lettered in blue “Termination of the Seaway.” A charming, womanly figure, in pale yellow summer attire, dramatically symbolized a brave kingdom in this heart of a water Empire. The Queen greeted port dignitaries and then moved on in splendid procession to meet her people.

There had been many such occasions the length of the Seaway. Not all viewing these demonstrations had given thought to the historic preparation the nation had made, in a continuous effort over one hundred years, to make safe a continuous avenue for water-borne traffic.

Through “The Passage” long before lights burned on Trowbridge and the Passage, had come the canoe, the schooner, the early steamboat, the supply ships, and the pioneers themselves. The present growth was not the work of princes or parliaments but the unconscious work of self- exiled immigrants. The Lakes carried many cargoes but none with the potentials of the immigrant. The temperate latitudes provided a perfect climate to develop strong characters. The first English words had been the voices of Cabot’s little company, whispered in the sober silence of a great discovery close by Atlantic shores. Now these voices have swelled to a mighty chorus that the world regards as the voice of a nation.

Voices of many nations are joined in this mighty chorus today; voices that have merged into a common language that echoes not alone through the rocky shores of rugged Lake Superior, but across the prairies, through the rocky passes to the far shores of the Arctic Sea. Eager faces, often bewildered, homesick, a little frightened, have found freedom and a new way of life. Their resourcefulness, often severely tested, developed in them a profound sense of belonging and possessing, rare ingredients of citizenship.

After Her Majesty’s later departure to the prairie provinces, H. M. C. S. Gatineau moved to her berth in the inner harbor.

The setting sun cast exquisite opalescent light through the light clouds over the Sleeping Giant. It touched to shell pink the soft mountains of cloud overhung by varying shades of silvery blue. The grey mist hung close to the glassy waters. The breakwater seemed a cordon of steel as the first blinking light of red marked the Gap.

The long terminal arms of the inner harbour were strangely quiet, lights came on at the piers. Now feeling her way in the deepening twilight, scarcely a wisp from her diesel-powered engines, a departing grain carrier maneuvered a reddish brown hull, reflecting amber in the still waters of the inner harbour. Cautiously turning her prow and swinging her jeweled stern, she slipped away through the Gap and out into the night. The labor of the port resolved itself in slumber, as away on the horizon, blinked the green light of the Passage. H. M. C. S. Gatineau gleamed with an incredible silver sheen, her bow floodlit at the pier

The potentialities of a new era slept with the night.

About the Author: Greatly cherished by Miss Anna G. Young is her memory of the historic arrival of Her- Majesty Queen Elizabeth II and Prince Phillip at the termination of their voyage on the Great Lakes, after the official opening of the St. Lawrence Seaway on June 23rd, 1959.

Members of the Great Lakes Historical Society and readers of Miss Young’s book, Off Watch, published in 1957, will be happy to know that a copy of this volume was placed on board the H. M. Y. Britannia.

“Her Majesty, the Queen, on the recommendation of His Excellency, the Governor-General, has been pleased to accept the autographed copy of your book Off Watch: Yesterday and Today on the Great Lakes.  In doing so, the Queen has asked that her warm thanks be conveyed to you for your thoughtfulness in sending her this most interesting and informative book. It will be placed on board H. M. Y. Britannic.”

Miss Young, a generous supporter of our Society, and contributor to INLAND SEAS, is a resident of Guelph, Ontario.