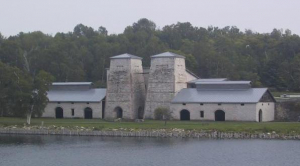 The little town of Fayette, with its snug Snail Shell Harbor, had every reason to believe in its future. The stacks of the two furnaces were blasting away day and night, the air at times being heavy with acrid gases and the night’s skies reflecting their red and amber flames. The harbor was alive with shipping, the schooners awaiting their turns at the long wharf to be relieved of their burdens of iron ore received at Escanaba’s great ore dock. Then they would take on a small, but heavy load of pig iron, consigned to Cleveland, where it would be converted into useful metal for commercial purposes. This the schooners could do from early spring until late in the fall, long after Lake Superior had become icebound. Fayette could only prosper and forge ahead, and given time, would soon surpass Marquette, and even Escanaba, as the metropolitan city of the Upper Peninsula of Michigan.

Fayette came into being, not by chance, but to fulfill a necessity, meeting the requirements as being the most favorable site for a proposed project. The Jackson Iron Company, its main offices in Cleveland, and its great iron mine, located near the present city of Negaunee, was producing far more ore than could be delivered to the market during the navigation season on Lake Superior. Ore came out of the mine all year around, but for five or six months of the year, due to the freeze-up of the lake, its shipment to the lower lake ports was impossible, thus requiring expensive stockpiling. To overcome this difficulty the Peninsula Railroad was built between Negaunee and Escanaba, a distance of some sixty-odd miles, this line being opened for traffic in December, 1864. At the same time the railroad was being built, the first ore loading dock at Escanaba was under construction, this being ready for use early in 1865.

Following their completion, the Jackson Iron Company commenced shipping its iron ore to Cleveland, the route across Lake Michigan, through the Straits of Mackinac and into Lake Huron, affording several additional months of lake navigation. However, this did not solve the problem. Eight days were required for a round trip, the most the sailing vessels then in use could carry was less than a thousand tons of ore, and the transportation costs absorbed the profits. It became necessary for the general manager of the Jackson Iron Company to solve the problem. 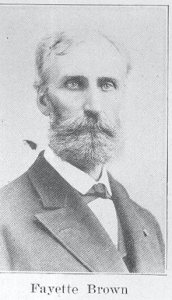 Fayette Brown was born in North Bloomfield, Trumbull County, Ohio, on December 17, 1823. At the age of eighteen, after receiving a substantial education, he secured employment as a clerk in the dry goods establishment of an elder brother in Pittsburgh, Pennsylvania, becoming a member of the firm in 1845. He removed to Cleveland in 1851, becoming a member of Mygatt & Brown, bankers. In 1857, Mr. Mygatt retired and Mr. Brown conducted the business until the outbreak of the Civil War. He then accepted an appointment as paymaster in the Union Army, resigning in 1862, with the rank of Major. Returning to Cleveland, he became general agent and manager of the Jackson Iron Company.

It was Fayette Brown who conceived the idea, that if a suitable location could be found for a blast furnace to produce charcoal pig iron, it could be delivered to the lower lake ports at far less transportation costs than for the raw iron ore. He put a party into the field to explore the country in the vicinity of Escanaba, which, after some months of survey, recommended the site which was to become the town of Fayette —

its name honoring the general manager. Sixteen thousand acres of hardwood timber lands were secured to insure an ample supply of charcoal.

The site purchased for the town and blast furnace included extensive ledges of limestone, necessary as a flux in the smelting process, and nature provided the small, land-locked haven, Snail Shell Harbor. This harbor, named for its contour, afforded sufficient space and depth of water for the many vessels which would visit the Port of Fayette.

Fayette is situated on the west side of the Garden Peninsula, so named for the village of Garden at its northern end, the center of a small farming community. This 20-mile long, narrow peninsula, is located in the northwest “corner” of Lake Michigan, enclosing Big Bay de Noc at its west, and forming the northeast extremity of Green Bay. Roughly, it is a hundred-mile drive west of the St. Ignace end of the Mackinac Bridge to the Fayette turnoff, this being about thirty-eight miles east of Escanaba on U. S. Highway No. 2. This east and west highway skirts the southern rim of the Upper Peninsula. The 15-mile drive over a paved road southward to Fayette is rewarding, permitting frequent glimpses of the pleasant waters of Big Bay de Noc on the right and an ever- changing view of forest and farm lands on the left. However, at its inception, Fayette was only approachable by water or over rough dirt roads which followed the Indian trails into the depths of the forests.

It was on Christmas Day, 1867, that the first furnace was put in blast, the second stack being completed and placed in service in the Spring of 1870. Homes, business and other buildings were erected and it became the hope of the residents that the fast-growing town would in time surpass all others of the Upper Peninsula. The Company maintained a school for the children, and entertainments and church services were held in a large hall on the second floor of a business block, known as the “Opera House.”

As the town prospered, all too many saloons were opened at its outskirts, the Company not permitting the sale of liquor on its property. Along with them came the bawdy houses and the resultant, loss of law and order. Fayette, in spite of its beautiful setting with forests on one side and the sparkling waters of Snail Shell Harbor on the other, became, for a time, the most disreputable town in the Upper Peninsula. A deputy sheriff, appointed to police the town, failed miserably as an officer of the law, and it became necessary for some of the more substantial citizens to organize a vigilance committee for the administration of summary justice. Over the years Fayette had its ups and downs. Like many frontier towns, built mainly of wood, it had its bad fires, destroying parts of the town, as well as destroying Company buildings and putting the stacks out of production for a time. When the pig iron market was good, Fayette thrived. During the several depression years experienced during Fayette’s short history it became necessary to cease the production of iron.

The beginning of the end came in 1883. Between that time and 1890 the furnaces were in and out of production several times; however, the demand for charcoal pig iron became almost nil and in 1890 the machinery was dismantled and with the dispersing of the population, Fayette returned to the wilderness from which it sprang to join the ranks of ghost towns.

It is not presently known whether or not Fayette Brown maintained a residence in the Upper Peninsula. It is evident that he spent considerable time during the summers in the Lake Superior Country for he was a member of the Munising Fishing Club as well as a member, from 1893 to 1904, of the exclusive Huron Mountain Club. He had visited Marquette as early as 1857, then an infant town of eight years of age, and being an ardent sportsman throughout his long life, undoubtedly took full advantage of the offerings of the lakes, streams and forests. 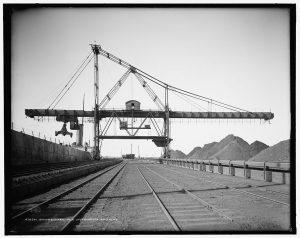 Harvey H. Brown became assistant manager of the Jackson Iron Company in 1882, and in 1887 became its general agent, taking over the duties of his father. Alexander E. Brown, the other son, with engineering ability, saw in the ore unloading situation a challenging problem. From a knowledge of business gained in his father’s office he became aware of its commercial possibilities. In 1880 he directed his inventive talents to the ore unloading problem which resulted in the development of a system of hoisting and conveying machinery that has long since been brought to a high state of perfection. The first Brown ore hoisting machine was built on the Erie Dock at the foot of Pearl street and the old river bed at Cleveland.

Long before the demise of the town of Fayette, the elder Brown became interested in a number of financial ventures in Cleveland, becoming an industrial giant as well as a banker. He took the leadership in the development of several large manufacturing plants in Cleveland, but was never too busy to deny himself the pleasure of taking an active interest in several sportsmen’s clubs in Northern Ohio. He died at his home on Euclid Avenue — within the limits of that thoroughfare which knew not of the clanging and racket of street cars — during January, 1910, at the age of eighty-six. 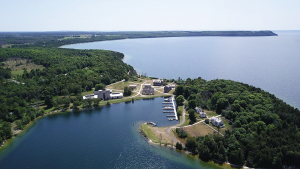 Today, Fayette, which has lain dormant for over seventy years, is taking on a new lease of life. The State of Michigan has acquired the property, and through its Department of Conservation, the town is in the process of being restored as a state park. A long-range program for its preservation is under way, the plans including a museum to display the artifacts and articles pertinent to the area of nearly one hundred years ago. It is the expectation that a model blast furnace will be on display so that the visitors can see how the pioneers produced pig iron a century ago. Easily approachable over paved roads, Fayette is as equally accessible for small boat travelers over the waters of Lake Michigan and the upper reaches of Green Bay.

It is fitting that the town of Fayette be preserved, not only as a state park for the enjoyment of weary travelers, but as a monument to a great man, who, during his tenure as general manager of the Jackson Iron Company, did much to further the industrial progress of the Upper Peninsula.