Traverse City, Michigan, had its origin with the purchase of land at that place by William Boardman in 1847, whereupon his son began a rudimentary logging business. In 1851 the Chicago firm of Hannah, Lay and Company purchased the Boardman lands and began more extensive lumbering operations.1 Boardman Lake, the Boardman River, Boardman Avenue, Hannah Park, and Hannah Avenue in present-day Traverse City are testimonials to those early developers. Moreover, Hannah, Lay and Company is still doing business on the shore of the West Bay, after over a century at the same location.

Traverse City of the late 1850s and the early 1860s was, in every sense, an isolated community. One historian of Michigan, in noting the small number of persons attracted to the settlement in the early years,2 describes the area as then a “vast unbroken forest that stretched back from the little opening made at Traverse City to a seemingly unlimited distance.”3

There were only limited modes of communication with Traverse City in the formative years — by foot, horseback, or sled; by Lake Michigan’s waters; or by some combination of these. There was optimism, of course, such as that expressed in July of 1859 by the editor-publisher of the Grand Traverse Herald.4 He wrote that “a route for a state road through the wilderness from Grand Traverse Bay to civilization has been surveyed this season, and the time is not far distant when we shall have a good thoroughfare to Grand Rapids.”5  It wasn’t until late in 1863, however, that a road to Manistee and Grand Rapids was a reality.6

When navigation was closed, an Indian trail between Manistee and Traverse City was the only means of access to, and egress from, Traverse City. Over this trail a weekly mail was carried by various Indians and whites employed by mail contractors who, at that time, provided the service for the United States Government.7 Most of those in Traverse City and the surrounding area relied heavily on the Grand Traverse Herald for outside news; the Herald, in turn, relied on the receipt of outside papers so as to be able to reprint the news items from them.

When the weekly mail from Manistee failed, as it often did, up-to-date8 news was a precious commodity. In January of 1862 the Herald lamented that “it is bad enough, in times like these,9 to have only a weekly mail; but when, by the gross negligence and indolence of the contractor, the time is extended to a fortnight, the evil becomes unbearable. This same contractor played many such tricks last winter — indeed every winter for the last three years.”10

Lakes vessels, during the season of navigation, provided a supplementary — and often superior — means of acquiring outside news. In the early years most of the vessels touching at Traverse City were under sail. Many of the arrivals and departures were chronicled in the Herald, often with a note as to which newspapers were delivered by the masters.

“The barque Waverly, Captain Green, arrived here on Tuesday from Chicago. She brings New York and Washington dates of the 5th, and Chicago papers of the 6th.”11  “We are under obligation to Capt. J. W. Brown, of the schooner Eclipse, for papers of a later date than those received by mail.”12 “The barque Pacific arrived here on Tuesday evening, bringing Chicago papers to the 28th.”13

In addition to newspapers, word-of-mouth information was brought to Traverse City via the lakes vessels. The Herald, a strong Republican paper, excitedly reported that “the schooner Perry Hannah, Capt. Canfield, arrived from Chicago on Wednesday night. She brought no papers, but we learn verbally . . . that New York, Wisconsin, and the City of Detroit have all gone Republican by large majorities.”14

Sail, like overland travel, had its drawbacks. The schooner Eclipse, according to the Herald, “was becalmed most of the time” on what had become a nine-day trip from Chicago.15 On the other hand, the schooner Perry Hannah was reported as the first arrival from Chicago in 18 days, “the vessels having all been detained by the late severe gales.” To this was appended that “she brought no late papers.”16 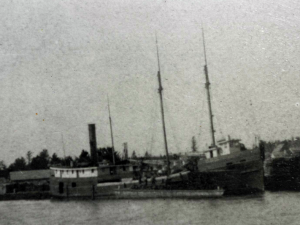 Although steam-driven vessels had put in at Traverse City during the 1850s, a significant event in the development of communications was the purchase of the propeller Alleghany by Hannah, Lay and Company in the Spring of 1860. The Alleghany was to ply between the Company’s docks at Traverse City and Chicago, and was to “leave Traverse City every Tuesday evening, and Chicago every Saturday morning. . . . “17 A representative of the Herald made the round trip and wrote that the trip to Chicago, “instead of being a terror, a dread, and often a ten day’s voyage, as it was in sail vessels, is now a pleasant pasttime (sic).“18 The paper advised that the trip (one-way) normally takes “about thirty hours.”19

During the first few years after the coming of the Alleghany other steam vessels put in at Traverse City, but on a more-or-less irregular basis. In March of 1861 the Northern Transportation Lines placed an advertisement in the Herald stating that their propellers running between Ogdensburg and Chicago would call at Traverse City during the ensuing season. On this line were such well-known vessels as the Michigan, Empire, and Prairie State, among others.20 It is interesting to note that there was practically no further mention of this prominent line in the issues of the Herald for the next succeeding two years. 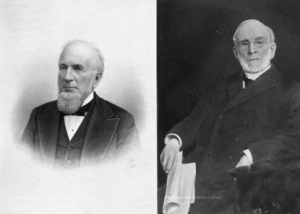 The Alleghany was, in fact, the Herald’s most favored and most oft-mentioned vessel. In notifying readers of the Alleghany’s route change to the Sarnia-Chicago run (touching in both directions at Traverse City), the paper volunteered that “this old favorite performs her trips as regularly as clock-work. . . . It is enough to say that Boynton, that prince of Captains and sailors, commands her.”21 Perhaps a good sense of business and a realistic appraisal of the community’s future prompted the editor of the Herald to shower praise upon the Alleghany. Hannah, Lay and Company, owner of the vessel, was by far the biggest single advertiser in the Herald.22 Too, the company was the biggest single influence in the development of the area from 1851 to the late 1880s, as the owners maintained pineries, a lumber mill, a flour mill, a mercantile store, and a bank during this period.23 In essence, Hannah, Lay and Company was the base of the Traverse City economy.

In further commendation we read: “Through the politeness of Capt. Boynton, of the Propeller Alleghany, which arrived hereon Wednesday morning from Sarnia, we are favored with a copy of the Detroit Free Press of the 25th. We glean from it all the important war and other news items.”24

Lake travel under steam, as under sail, had its drawbacks. Although the Alleghany reputedly “performed her trips like clock-work,” the schedule was interrupted on a number of occasions. On September 15, 1861, and again on November 1, 1861, her engine was badly damaged, the first incident causing a few weeks’ layup.25 In early October of 1862, the Alleghany was hit by a brig on Lake Huron, and was taken to Chicago for repairs, preventing her regular trips for five weeks.26

In commenting on the September 1861 incident the editor of the Herald deplored the fact that “during the season of navigation we rely upon the regular trips of the Propeller Alleghany for news . . . but the accident which has happened to that boat deprives us of those facilities, and we are thrown back upon the old resources.”27 Again, late in 1862, the editor complained that “we have delayed the publication of our paper beyond the usual hour, in expectation of news by the Alleghany, which is now two days past due from Sarnia. We can wait no longer, and go to press without any news. A rumor, however, has reached us from Northport, that McClellan has fought another battle, gained a great victory, and taken 40,000 rebel prisoners.”28

The “beginning of the end” of isolation for Traverse City, with respect to the news events of the state, nation, and world, came in May of 1862. “Our Postmaster informs us that on and after the first day of July next, we are to have a semiweekly mail from Grand Haven via Muskegon, Manistee, and Traverse City. . . . We begin to see our way out of the woods.”29

Although the overland semiweekly mail efforts failed for the first two months,30 the Grand Traverse Herald   was finally able to print that “the arrangements have been perfected and we have now a semiweekly mail to Muskegon and the Outside World.”31

About the Author: Mr. Edward S. Warner is a resident of Kalamazoo, Michigan, and an Instructor there in the School of Graduate Studies, Department of Librarianship, Western Michigan University. Combining a longtime fondness for the Great Lakes area with firsthand knowledge of the Grand Traverse region, Mr. Warner has compiled the results of his research in the early volumes of the Grand Traverse Herald into this article which he felt would be of interest to the readers of Inland Seas.