Whether the ship’s orchestra is playing the tune which titles this story when the sun shines, or “Let a Smile Be Your Umbrella” when rain is in the air, one can be sure of an interesting ride down the Detroit River on the steamers Columbia and Ste. Claire.  Leaving the Woodward Avenue Dock six times a day between Memorial Day and Labor Day, these ships have carried millions of passengers to Bob-Lo Island, an amusement park on the Canadian side of the river near Lake Erie.  These cruises appeal particularly to the family with their picnic basket – trying to get away from the city’s heat; the couples wanting to dance in the ballroom aft, or just to enjoy each other’s company in the moonlight; and to the marine enthusiast who likes to get closer to the passing parade of ships. 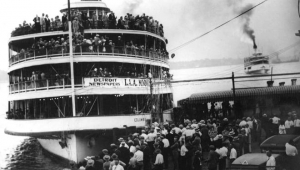 The Columbia is of 968 gross tons, 216 feet long, 60 feet wide, and has a capacity of 2556 passengers.  Her oil-fired triple-expansion engine of 2000 HP provides a cruising speed of 13-15 miles per hour, and she frequently passes the slower-moving freighters in the close confines of the channel.  The Ste. Claire is of 870 gross tons, 197 feet long, 65 feet wide, and carries 2414 passengers.  They are well-kept and one would not imagine that they are veterans of half-a-century of service.  Comparison of these craft is easily made by going downstream on one, and after a sojourn on the island, returning on the other.  It was my pleasure to have such an experience on an August afternoon in 1955.

With a long blast of her whistle, and the playing of nautical tunes by the ship’s orchestra, the Ste. Claire headed out into the channel.  Passenger ship fans were quickly attracted to the last of the D&C fleet, Eastern States, City of Detroit III, and Greater Detroit languishing at a dock a short distance downstream.  Binoculars reveal the deterioration which has resulted from their five years of inactivity.  Just one year ago two other ships of this fleet were still to be seen moored on the river – the Western States (now a ‘Motel’ at Tawas City, Michigan), and the City of Cleveland III, (burned while being converted to a barge at Windsor, Ontario.)

Before reaching the Ambassador Bridge there was already a profusion of signaling with upbound and downbound freighters, and with cross-river carferries.  These are the sounds which thrill the steamboat fan but sometimes they send children into tears.  Falling into the downbound procession of ships we passed waterfront terminals with foreign freighters unloading general cargo; steel ills with freighters unloading iron ore; a shipyard whose drydock contained the 620-foot Cliffs Victory, and alongside the 647-foot Cason J. Calloway, damaged that week in a collision on the St. Mary’s River.  The Tom Girdler, converted from an ocean vessel into a 600-foot bulk carrier of 14,000 tons capacity gave us a blast from its air horn in passing upbound.  Powerful as the air horn may be, it lacks the romantic sound of the steam whistle which was often a distinguishing feature of the old passenger ship.

If the departure time is planned carefully, one will encounter the only cruise ships remaining on the lakes – the North American and the South American.  Their gleaming white hulls with multi-colored flags flying fore and aft, and crowded decks of waving vacationists provide a high point of this excursion.

Further downstream are the cities of Ecorse and Wyandotte with their busy factories and waterfront homes with spacious lawns.  Many small craft were encountered with their occupants fishing, water-skiing, or pleasure cruising.  The Canadian side of the River below Windsor is very sparsely settled, with some areas probably changed little from what the French explorer, LaSalle, encountered when he sailed the Griffon up the lakes on 1679.  As we approached Bob-Lo, downbound freighters proceeded on its west side through the Livingston Channel.  Upbound ships pass by on the east side of the island, and an excellent view of this traffic is obtained from picnic tables near the boat dock.  At the south end of the island is an old blockhouse – an outpost of Fort Maiden at nearby Amherstburg in the War of 1812.  In addition to blockading the river to American shipping, the fort was also the embarkation point for Barclay’s fleet which was defeated by Commodore Perry’s force near Put-in-Bay in 1813.

After a train ride around the island, rides on the ferris wheel, merry-go-round, caterpillar, whip, rocket, and a snack in the cafeteria, the homeward trip began aboard the Columbia.  Other freighters, American, Canadian, and European were passed en-route to Lake Erie with their cargoes of iron ore, limestone, wheat, colorful deckloads of automobiles, and package freight.  The Detroit skyline, framed by the Ambassador Bridge, came into view as we passed around a bend in the river.  The sun was casting deep shadows on these buildings as we pulled out of the channel and tied up to the dock with a mournful ring of the telegraph – “finished with Engines”.

These daily excursion boats are only a memory in most of our Great Lakes cities, but few offered the variety of pleasant experiences for the marine enthusiast as is found on these Detroit River cruises.  While the river “keeps on rolling,” let’s hope that these Bob-Lo boats “keep on sailing.”