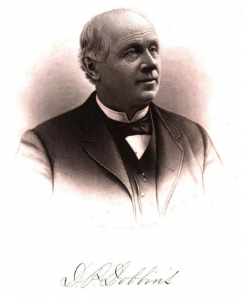 Captain David Porter Dobbins, the creator of the present Coast Guard lifeboat, was born the third son of Captain Daniel Dobbins who was master of the United States Navy during the War of 1812, on October 29, 1817, at Erie, Pennsylvania. David got his grade school education at the Erie academy. Following his education he served in the cabinetmaking business for a short time.

Being the son of a great captain, he soon tired of the quiet land life and on the steamer, William Penn, learned the ways of the Lakes under the guidance of Captain Wight. Later he worked on the schooner, T. W. Maurice; the United States revenue cutter, Erie; the schooner, Buffalo, with Asa E. Hart as its captain and the brig, Indiana, with its captain “Buck” Burnett.

In 1837, now a captain in his own right, Dobbins bought the schooner, Marie Antoinette, built by August Jones at Sandusky. Hauling her out at Erie, he rebuilt and renamed her the Nick Biddle, in honor of that famous Philadelphia banker. After three years of active service, he sold her to H. M. Kinne, Esq., in 1840.

Upon marrying Mary Richards in 1841, Captain Dobbins retired from the Lakes for one year. At the end of that time he took command of the schooner, Henry Norton of Cleveland. The years 1843 and 1844 brought with them the command of the William Woodbridge. The following year he bought the schooner, Emily, from Captain Aaron Root. After many years of service, he sold her prior to taking command of the steamer, Lexington, in 1848.

The next year found Dobbins, with several other skilled men, building the propeller Troy, at Cleveland. Carrying on Chicago trade, Dobbins was in command of her from 1849 until 1851, when he sold his share of the boat and went into marine insurance with the firm of Durfee and Atwater, at Buffalo, in 1852. Each winter thereafter, he cruised on the seven seas, returning as soon as spring made the Lakes navigable, to resume his business.

Dobbins competed for the $100,000.00 prize offered by the state of New York for the best steam canal boat. His boat, the William Newman, missed first place because his cheating competitors pickled his coal in brine. Even so, his boat made the quickest passage on the canal, taking only four days to travel from Albany to Buffalo, and was awarded the second prize. This venture interested him in steam canal boating. Shortly afterward, Dobbins assumed the management of the Baxter Steam Canal Boat Company, with about sixteen steamers running between Buffalo and New York. 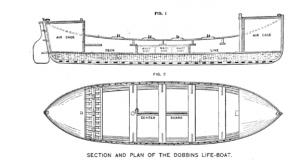 From his earliest years in boating on the Lakes, Captain Dobbins was interested in lifesaving and rescue work. The Boston Express (December 20, 1885), stated that Dobbins knew the “language and temper of the wind and weather.” He knew what to do in emergencies. He organized the first rescue party to put out of Buffalo to a sinking wreck, in October, 1853. They put out in a lifeboat on wheels, drawn by four horses, to rescue one man. In the process, two of the horses were killed and the rescuers exhausted, but the one man, although half dead, was saved.

Captain Dobbins was commissioned in 1876 as the superintendent of the Ninth United States Lifesaving District. This area included the coasts of Lakes Erie and Ontario and the banks of the Ohio River to Louisville, Kentucky, and boasted ten first-class lifesaving stations.

Dobbins ever strove to improve the service in his area. The results of this drive for safer methods of rescue brought forth the “Dobbins’ self­righting and self-bailing, unsubmergible lifeboat.” Besides being the aforementioned, it proved to be strong, portable, and of moderate weight, being between 1500 and 2000 pounds. It was possible to carry it on a launching wagon to shore or swung from a ship’s davits into the Lake with a full load of passengers and crew. If it were accidentally pushed from the deck, it would automatically right itself, ready to carry thirty to forty people, and upon necessity, it was capable of temporarily sustaining one hundred persons. 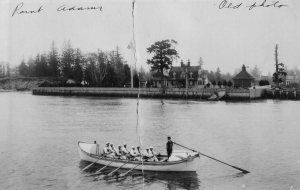 This lifeboat had several definite features. It could not be crushed below the waterline because it was ballasted with thick sheets of cork that had previously been dipped in hot paraffine. The cork was fastened closely together throughout the entire space below deck. The hold, being a continuous mass of cork, formed a thickness which could not be pierced or broken on jagged rocks. And because of its open, surf boat qualities, it could not be capsized. Captain David Porter Dobbins designed a boat that has aided in the saving of many lives and much property since that time.

This same lifeboat, though somewhat modified, is still used in the Coast Guard. The World Book Encyclopedia includes among the various equipment needed in Coast Guard work, a “self-bailing and self-righting boat about thirty-six feet long, air chambered, and equipped with a gasoline engine, sail and oars.” The pictures accompanying the article verify the similarity of the two lifeboats.

And so, Captain David Dobbins, son of a great Great Lakes captain, and pioneer in lifesaving on the Lakes, left for the modern sailor a rescue measure, used not only on the Great Lakes but by all Coast Guard units the United States over.