Chesley Blake* was born in Maine
And sailed before the mast.
He fought in the battle of Lundy’s Lane
And in the army did remain
Till peace was made at last.

A giant over six feet three
Was Chesley Blake, they say.
He came to the Lakes to ply his trade
And soon he was a captain made
In Oliver Newberry’s pay.

Always swearing to leave, and always
Standing by Oliver’s ships.
He had a chest, if you can believe,
Like a volcano about to heave,
And great oaths sprang from his lips.

His voice was like the speaking trumpet
Of Boreas. In length
His arms were like a gorilla’s.
His jaws – A boa constrictor’s, and his paws
Had Bluebeard’s size and strength.

In the midst of storms he would shout commands
In such a blasphemous way,
That the rigging trembled, also the shrouds;
The lightning hid behind the clouds
And the thunder slunk away.

He was a captain who knew his trade
Fore and aft and some more.
In forty years on countless trips
Nothing ever scratched paint from his ships
And they never touched bottom or shore.

The schooner Jackson, the Michigan,
The Nile and the Illinois:
At their helms and others, all of wood,
This ramping roaring captain stood,
And he loved them like a boy.

He died of fear, did Chesley Blake,
Who never feared storm or battle.
When cholera raged, he ran in fright
And shook in terror day and night
To hear death’s ghostly rattle.

He hid in a Lake Superior mine,
Then to Milwaukee came.
And there the cholera waited to take
The one who feared him, Chesley Blake
And rack his giant frame.

He seemed to rally, but that same night
The old Nile went ashore.
When news was brought to his bed, he rose
And with a cussword asked for his clothes,
Himself, and a captain once more. 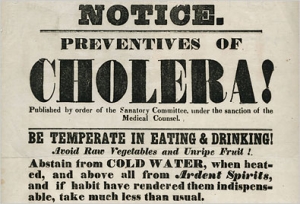 He heaved himself into his pants,
Sat down on his bedside
And had one great boot half-way on
When in that moment he was gone –
With uplifted foot he died.

A-pulling on his boots he died,
All for his good ship’s sake.
Forgetting the cholera, up he girds –
“Save my ship!” were the last words
Of Captain Chesley Blake.

About the Poem: Capt. Blake died at Milwaukee in I849. The material for this ballad was taken almost verbatim from Bygones of Detroit by the Honorable George C. Bates, pub­lished in the Detroit Free Press 1877-8, and reprinted in the Michigan Pioneer and Historical Society Collections, vol. 22, pp. 339 to 341.