Among the fleets of sloops, barques, brigs and schooners that whitened the lake lanes seventy years ago, there was just one Gospel Ship. In the 1870’s and ’80’s the Glad Tidings sailed out of Chicago, not with wheat or coal or lumber, but with a gospel tent, a portable organ, a box of Bibles and a locker full of hymn books. She was the command of Captain Henry Bundy, a big, broad, bearded man who had been converted on the barque Potomac of which he was owner and master. After his conversion he devoted his life to religious service and assumed the title General Missionary of the Northwestern Lakes. 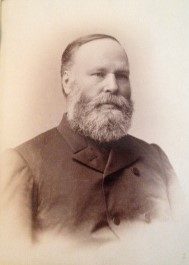 Actually, Captain Bundy had a succession of four Gospel Ships, each one larger and more efficient than its predecessor. In those vessels he put in some twenty strenuous seasons of navigation and evangelism. As the circuit-riders of the frontier had gone on horseback through the counties of the lake states, so Captain Bundy was a sailor on a circuit that extended over a thousand miles of shoreline. He took the scattered ports of Lake Michigan and Lake Superior for his parish, traveling with his family aboard and putting into the lumber and iron harbors to hold religious services. Sometimes he preached from the deck of the Glad Tidings to a circle of men on a pierhead. More often he set up his tent on the waterfront and announced a daily schedule of meetings. He visited thousands of families in the lonely lake towns.

The first of the Gospel Ships was a single-masted vessel, nineteen feet long with a six-foot beam, which had been designed originally as a coast guard craft. She carried a mainsail and a jib, and above her cramped little cabin a long pennant at her masthead labeled her “Bethel Ship.” Her first voyage took her from Chicago to Washington Island, at the entrance to Green Bay. Among the fishing families on the island Captain Bundy established several Sunday Schools, to which people came in large numbers. Wherever he went Captain Bundy seems to have attracted eager listeners from the lumbermen, longshoremen and seamen in the lake towns.

After a single season Captain Bundy’s needs had outgrown his first small craft and so the Glad Tidings Number 2 was built in Chicago, in 1877. This was a two-masted sloop of 33 tons, a graceful vessel and a good sailor. She could easily be distinguished from small trading vessels on the lakes by her long jib-boom and the clean lines of her cut-water, as well as by the “Bethel Ship” banner that billowed from her foremast and the three pennants spelling GOD IS LOVE on her mainmast.  In this vessel Captain Bundy carried a portable organ and a gospel tent for services ashore, and for intimate services he could use the cabin of the sloop which housed a small chapel with an altar decorated in gold leaf.

For six seasons the Glad Tidings Number 2 sailed the lakes. In that time Captain Bundy established many missions at remote points on the upper lakes and became widely known among Great Lakes mariners. But eventually he found his vessel too small, partly because his family was growing up and needed more living space aboard, and because each season he distributed several hundred cases of Bibles, contributed by the American Bible Society of New York, and a large quantity of religious periodicals. So, he undertook to build a larger craft – the Glad Tidings Number 3.

This project is the subject of a letter which has been preserved by Miss Laura E. Burmeister, head cataloger at the Library of the University of Southern California. The letter is addressed to Mr. Charles Burmeister, her father, whose compilation of a history of the Great Lakes was interrupted by his death in 1891. His uncompleted manuscript was given, along with other papers and relics, to the University of Wisconsin. For some years Mr. Burmeister served as marine correspondent for the Chicago Inter-Ocean.

The letter, reprinted here by Miss Burmeister’s permission, reveals that Captain Bundy had some difficulty in steering a course through the intricacies of English spelling.

in reply to your card would say the Little Western built in Chucago that foundred and drownded one man on her first trip on the Lords Day morning never made but that trip was lade up and burned in the great Chicago fire. The Gosple Ship No. 1 was built [by] Cuson boat bulder in Chicago. She was built for a life boat but had never bean launshed untel I bought her. She was a safe boat but to small for the work. I sold her and she was taken south and put in the Oreng traid. Glad tiddings N.2 was built in the winter of 1877 in Chicago. She has proved to small also. We carry gosple tent organ and children  ar all grown and want more rume. So we are building Gospel Ship No. 3 with help of our Masters hand. We have to raise six thousand dollars for the new ship if there is aney bodey In frankford would like a share with our Lord In his ship would you be kind enough to se that it is forwarded. I send you reports of last year from your faithful Missionary 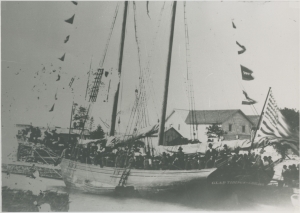 The Gospel Ship Number 3 was built at Manitowoc. It was 50 tons burden and it served Captain Bundy for nearly a decade. In that time, he established so many missions that it was impossible for him to reach them all in one season. So he felt the need of a steamer that would not be delayed by calms and head winds and he planned the building of the Glad Tidings Number 4. 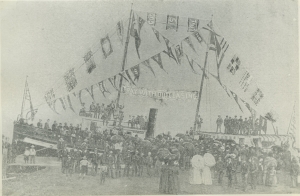 The new ship, costing more than $10,000, was built at Miller’s dry dock on Goose Island in the Chicago River. She was 80 feet over all with an 18-foot beam, and was powered by a high-pressure engine and a screw propeller. Her forward cabin, beneath the navigation bridge, was fitted up as a chapel to seat forty-five persons. She was a trim and sturdy little steamer. Her crew consisted of an engineer and two missionary sailors, all of whom had been converted by the Captain. His wife acted as cook and his 17-year-old daughter played the organ.

With a steamship to carry him on his rounds, Captain Bundy was able to maintain a schedule of appointments at scores of lonely settlements on the upper lakes. It was said that he reached a quarter of a million people on his many cruises. For some twenty years the Glad Tidings, either as sloop or steamer, with GOD IS LOVE at her mast­head, was a familiar sight in the harbors from Chicago to Duluth.