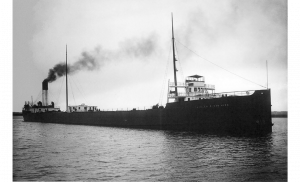 In this ever changing and progressive world, one welcomes change that brings comfort and removes labor from man’s daily tasks. when that same progress removes an item of sentiment or familiarity, like a generous old tree or local store, which we fondly remember as a child, we object. “Hey, you can’t take that! Why, that’s been there as long as I can remember,” one thinks. For the writer, it’s an ore boat — an ore boat with golden rivets!

Boats usually lead a rather dull existence, despite a few bumps and scrapes, plowing the Lakes happily, trying to make money for their owners. But such was not the case for the MV Capt. C. D. Secord, now in her 68th year on the Lakes.

The Secord was launched in 1900 by the Bessemer Steamship Company, which in 1901 became part of the Pittsburgh Steamship Company. Named the Charles R. Van Hise, her original dimensions were: 446 feet long; 50 feet beam; 29 feet 6 inches depth; 5,117 gross tons. Her first years were relatively uneventful until late Fall of 1904. She was locked in 18 inches of solid ice during a quick freezeup in Gladstone, Michigan. The ice breaking power of the steamer James Watt freed her to open water.

In 1918, however, when our country was feeling the bite of German U-boats on rampage in the Atlantic, many lake steamers were taken to the seaboard for government or coastwise service. All were of a beam less than 44 feet 4 inches, the maximum allowance for the Welland Canal locks at that time. The Van Hise, because of her depth of 29 feet 6 inches, was chosen. It was hoped that greater tonnage would result from using a 50-foot-beam ship. The U. S. Government Emergency Fleet Corporation bought the Van Hise from the Pittsburgh Steamship Company for $640,000.00. The Great Lakes Engineering Works at Ashtabula, Ohio, cut her in two, raised the deck four feet for a moulded depth of 33 feet 6 inches, and installed side tanks and pontoon tanks on deck, which acted as outriggers for stabilization. The forward end was towed to Buffalo’s outer harbor and rolled over so that it could be sent through the narrow locks on its side. Because of low water and unfavorable weather conditions, the forward end did not go through the first lock at Port Colborne until December 10, 1918. Since it was so late in the season, the forward section was laid over at Port Colborne until Spring of 1919. 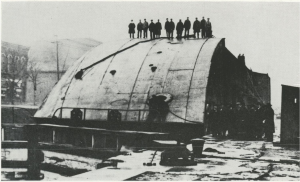 Bow section of the VAN HISE going through the Welland, 1919

Of course, all these events were not passing by unnoticed. The late Robert L. Ripley, in his syndicated “Believe It or Not” column, featured the sailing of the Van Hise, a 50-foot-wide ship through a 44-foot-wide lock!

November 11, 1918, saw the Armistice signed, and the project on which the Government had spent $2,500,000.00, including the $640,000.00 purchase price, came to a halt. One-half of the Van Hise was in Port Colborne, the other half was in Ashtabula. With all this expenditure, she became known as “The Boat With The Golden Rivets.”

With the passing of wartime, the U. S. Government Emergency Fleet Corporation auctioned off the vessel on a “where is, as is,” basis. The late A. E. R. Schneider, then working with the Cleveland Cliffs Iron Company, and the late James A. Paisley saw some tremendous possibilities for the Van Hise. They contracted with the Great Lakes Engineering Company in Ashtabula to join both halves. Because of additional stressing for salt water, they gambled their investment and added 96 feet forward of her forward deckhouse. With her new middle she acquired a new profile, 9,000-tons capacity, and a new name. Now she was the steamer A. E. R. Schneider. Her unique profile resulted from hatches located forward of her forward deckhouse. She possessed unusual loading characteristics because with her narrow 50-foot beam and her 33 ½-foot depth she could carry extra cubic feet of cargo. She could reach her loadline with oats before being totally filled up to hatch tops. 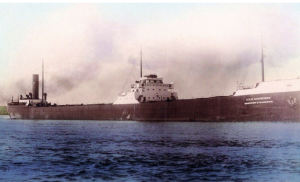 While sailing as a Cliff boat in 1924, the A. E. R. Schneider towed the disabled steamer J. H. Sheadle from Marquette to Ashtabula for repairs to the Sheadle’s afterbottom. For many years these two ships shared the record for the latest passage downbound through the Soo Locks —            the date, New Year’s, 1925.

Valley Camp Coal Company Ltd. took over the Schneider’s management from Cliffs in 1928. AS it was common practice on the Lakes to name boats after good customers, her name was changed in 1931 to the S. B. Way. Mr. Way was president of Wisconsin Electric Power and a good customer of Valley Camp.

Due to poor business conditions, the eight boats acquired by the late James A. Paisley interests, including the steamer  S. B. Way, were sold to the Columbia Transportation Company. In 1936, Columbia sold the Way to the present owners, the Mohawk Navigation Company Ltd. Upon going into Canadian registry, her name was again changed to Capt. C. D. Secord. Captain Secord brought out the vessel under the Bessemer flag. He was associated with Mohawk when the company bought her. 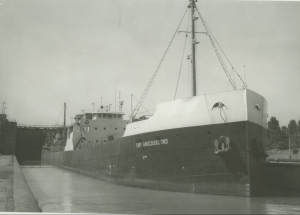 The Secord served her owners well for 18 years after joining Mohawk, and in 1954, they decided to repower her. Again she made headlines, for hers was not the normal transition. Her new engine was salvaged from a British freighter Imperial Metal, sunk during World War II in the Bay of Naples. The Diesel engine was 3,500 horsepower, and built by Harland and Wolff Ltd., of Glasgow. The engine was shipped to the factory for rebuilding and was installed in the Secord at Port Weller, Ontario. In August of 1954, the Secord, boasting a new rakish stack with blue house colors, loaded 334,393 bushels of grain at Duluth for delivery to Prescott, Ontario.

And so, old girl, you have been cut in half, deepened, lengthened, re-powered, and repainted. But still they think you are unable to carry out your role for man’s livelihood. Before long, the welder will spark off his cutting torch and bring to an end your illustrious 68-year career. The breaker will turn your unique profile into a cluttered pile of steel plate, Then you will be fed into a furnace. I wonder if in the process, when someone looks over your remains, they will find, deep in your bottom, encrusted with paint, course after course of your “Golden Rivets,” for surely they are there!

About the Author: Mr. Raymond C. Burke is Vice President of the Sabin Machine Company, Cleveland, Ohio. His fondness for the Great Lakes began at an early age from taking trips on the ore boats owned by his late grandfather, A. E. R. Schneider. He wishes to acknowledge information received from Captain J. Clarke, Cletus P. Schneider, Oliver Burnham, and Loren Hammett.