The Great Lakes are filled with sunken relics. Their hidden locations often revealed by tales of violent storms and tragic accidents. This story is similar, but the object of my quest is not a shipwreck sitting on the bottom of a cold dark lake. This is the story of an oil painting depicting a doomed vessel soon to be dashed upon the rocks. It’s a 19th Century master work which has been lost to the depths of time. The title of the painting is “At the Mercy of Neptune” and it was created by the Oswego, New York-born marine artist, Charles Henry Grant.

In the late 1800s, the port of Oswego was filled with tall sailing ships. The city was well suited for trade because of its location on Lake Ontario at the mouth of the mighty Oswego River (a branch of the Erie Canal System). Commerce thrived and it’s said, “The boats were moored so closely together in the harbor that one could walk across the river.” It was there, on its wharfs and docks, that two young artists were inspired.

James G. Tyler (1855–1931) and Charles H. Grant (1866–1939) were both born in Oswego. At an early age, these boys began painting the ships of the harbor. These artists of the Great Lakes eventually moved to New York City to study and opened their own studios. Success followed and they became renowned maritime painters of their day. Today, Tyler Hall is the Center for the Arts at the State University of New York at Oswego.

Grant attended the National Academy of Art in New York and studied under the great Dutch Master M.F.H. de Haas. He later moved to San Francisco and was named the official artist for the U.S. Navy’s extended cruise to Australia. 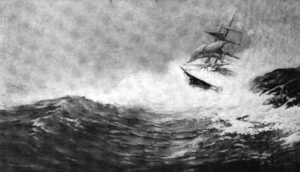 Black and white photo of Charles Henry Grant’s “At the Mercy of Neptune.”

In a California magazine dated 1916, an article titled, “Charles H. Grant, Noted Marine Painter,“ by Esther Laurentine Mugan, states, “At a recent exhibit of paintings held in the Sequoia Club in San Francisco there were two canvases which excited more than the usual amount of comment.” Speaking of Charles Grant’s work she stated, “I felt myself a certain degree of pride in my own judgment when he [Grant] said that ‘At the Mercy of Neptune’ was probably his best work — for that was the one I had selected from all the others, and I had only a photograph to go by, as the original is adorning a prominent gallery in the east.“

My interest in these marine painters was sparked while doing genealogical research. I had heard stories of my great grandfather W.R. Shayes while growing up. He was a photographer who had vanished in the late 1800s, when my grandmother was a young girl. No one spoke much of him because people just didn’t talk of such things back then. As I grew older, and became an artist myself, I became more interested in this part of my family history. I was raised in Oswego before moving to Florida. After attending art school I became an aerospace artist and worked for many years doing paintings of advanced aircraft and space vehicles. I decided a few years ago to research this kindred spirit. The ability to search old newspapers online was a major breakthrough and I was astounded with the volume of information that was available.

I learned that not only was W.R. Shayes a photographer, but that he owned one of the finest art galleries in the Great Lakes region.

In an Oswego Daily Times article dated March 21, 1896, the writer described in detail the opening of W. R. Shayes’ new art gallery and photography studio. The article stated that on the east wall, surrounded by a brass railing, hung a marine picture nine feet long painted by the brilliant local marine artist Charles H. Grant. The painting was originally meant to go to New York City, but Mr. Shayes was able to secure it as a permanent display for his gallery. This is the first time “At the Mercy of Neptune” was unveiled in public. It provided a good description of the noble picture. It represented a ship caught in the breakers near the cruel rocks. Her sails and rigging were fast going to pieces. So realistic was the picture that one could, “almost hear the roar of the breakers as they dash in fury against the doomed ship.”

I was intrigued to learn of these prominent artists and their friendship with my relative. Much like my career, these artists painted the state-of- the-art vessels of their day.

However, this story took a dark turn. Within 6 months after it opened, a mysterious fire destroyed Shayes’ beautiful gallery and severely damaged the painting.

The Oswego Daily Times reported on September 30, 1896: “The heat and smoke damaged ‘At the Mercy of Neptune,’ the painting of Charles H. Grant, valued at $1,500, which hung in the reception room. It was practically destroyed and will have to be repainted.”

Grant repaired the painting and it was displayed at the 1897 New York State Fair. The reviews of the painting were glowing. Critic James G. Wendell wrote, “So powerfully has he pictured the action of the surf, with its strong, graceful, engulfing masses of seething, translucent water, that your sight follows their fury, and feels no surprise to find fixed in the rocks at the shore, a brilliant fine study of a ship, whose tattered sails and broken sheets, are alive with color, and the spirit of a storm. His touches of color are full of prismatic beauty.”

The painting was eventually purchased by L.C. Rowe, a prominent judge in the city of Oswego, and hung in his residence until his death in 1928. In the judge’s last will and testament there is a line item, where he willed, “One Marine Oil Painting by C.H. Grant, in decedent’s residence, valued at $300” to his wife Emma. Emma B. Rowe passed away in 1955.

The last reference found of the painting is in an article in the Oswego Palladium-Times of April 14, 1943, where it states that for many years it was owned by the Judge L.C. Rowe family of Oswego. 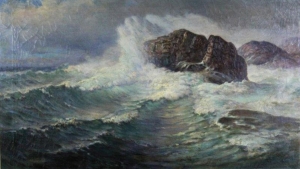 Painting of waves and rocks by Charles Henry Grant

From that point on, the trail became cold.

Running out of leads, I decided to paint a smaller reproduction of the painting in the hopes that someone might see it and know what happened to the larger original. Thanks to a local historian, a black and white photograph surfaced. I was fortunate to have some very colorful descriptions and critiques of the painting. While researching other paintings by Grant, I found one that seemed to replicate the mood and colors that matched the descriptions.

Using a similar palette and the black and white as a guide, I did my best to create what “At the Mercy of Neptune” may have looked like in full color. I’m sure this smaller painting doesn’t compare to the grandeur of Grant’s original. Since completing this painting I have continued to study these 19th Century marine painters and their instructors. My future project is to paint a full scale reproduction of the original on location at the H. Lee White Marine Museum in Oswego and donate it to them. My hope is to trigger a memory and create another lead. 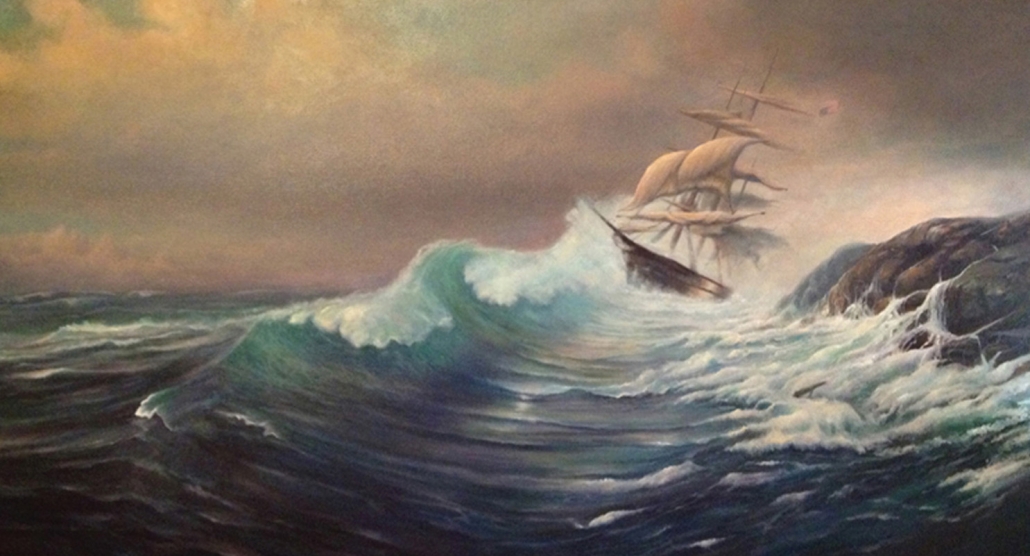 Perhaps there is a relative of L.C. Rowe who may recall what happened to the painting. It may have been sold, or given to a friend or family, or it might be rolled up in the attic of some private residence. If it has survived, this 9-by-6 foot piece of history could be located and used to inspire others. My interest is not only personal, but also to pay homage to these great painters who are part of the history of these Great Lakes. Anyone wishing to learn more about this can visit www.mybrushstrokes.com and on facebook — Paintings by Don Gillespie.

About the Author: Donald Gillespie’s paintings have been displayed in major art shows including New York, London, and Paris. His works can be found in many NASA facilities, the Air Force Art Collection, as well as corporate and private collections.