Is it the Lake Serpent?

The National Museum of the Great Lakes is dedicated to preserving and making known the history of the Great Lakes. As part of our mission, we propose to identify a shipwreck that might be the oldest discovered shipwreck in Lake Erie. Our partners, CLUE, found this wreck in 2015 and since then we have narrowed the possibilities from over 200 shipwrecks to 3. To make a final identification we need to spend about 10 days underwater excavating the portions of the buried schooner to be sure!

We are raising funds to pay for approximately 10 days of underwater surveying and excavation of a shipwreck we believe is the Lake Serpent, a schooner built in 1821 and lost in 1829.  Identifying and surveying this shipwreck is important because once completed we will understand why the Lake Serpent sank in 1829 and the site can tell us about early 19th century shipbuilding techniques that were used in Cleveland Ohio, where she was built.

The Lake Serpent was built in Cleveland in 1821 and carried general cargo for 8 years until late September or early October 1829.  The Cleveland Weekly Herald reported on October 8, 1829 that the ship had left four weeks ago to get stone at Put-In-Bay and had not been heard from.  The newspaper was able to confirm that the Lake Serpent had loaded the stone at Put-In-Bay, but hadn’t been seen since.  It was finally reported as the bodies of the Captain and his brother, Ezra and Robert Wright, had been found on the shore in Lorain County in the first week of October, 1829.  With that, it was believed that the Lake Serpent had been lost.  The shipwreck has been lost until now.

Side Scan Sonar of the shipwreck believed to be the Lake Serpent.
Image by Tom Kowalczk. 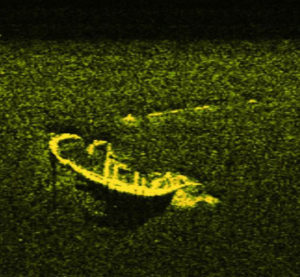 The Letty May, a ship similar to the Lake Serpent.
Image from the Historic Collection of the Great Lakes, Bowling Green State University. 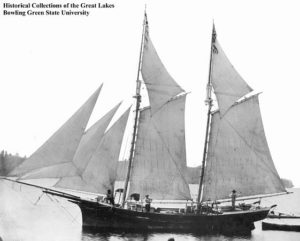 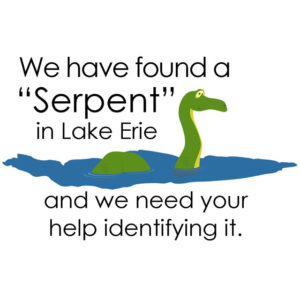 Ten days of underwater surveying and excavation will cost about $13,000.   We can do it so inexpensively because our volunteers do the majority of the work.   We have already raised $6,000 from our friends in the local community and need to raise an additional $7,000 to meet our goal.  We need to excavate portions of the boat to determine if a sea-serpent figurehead is attached to the bow and if the boat is carrying the stone cargo newspapers at the time reported she was carrying.

Your contribution will help us identify whether or not we have found the Lake Serpent.  There are also benefits to donating, please click the button below to be taken to our fundraising site.

Donate through Indiegogo
Scroll to top