The Sault for many, many, years before the locks and canals were completed was a great central meeting place of all Indian tribes when they were at peace with each other. They called it “Bowating,” meaning the Place of the Rapids, and the Chippewa located on the river named it “Gitchi-Gumi-Sippi,” the River of the Great Lakes.

Here also came Pere Marquette in 1668 and spellbound by the great beauty of the tumbling waters gave it its name, “Le Saut de Sainte Marie,” the “Falls of Holy Mary” -we call it “the Soo.” 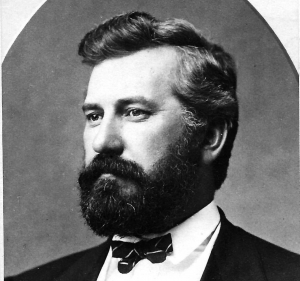 It was 100 years ago, April 19, 1855 that Charles T. Harvey first opened the sluice gates of the cofferdam and water entered the first state lock, a tandem affair of two chambers each doing part of the total job. But it was not until June 18 that the first sidewheel steamer, the Illinois, with Captain Jack Wilson in command, passed through the locks bound westward to Marquette. Later still, on August 14, 1855 the first cargo of 132 tons of iron ore left Marquette on the Brig Columbia, Judson Wells master, and passed through the locks on August 17.

The Sault has a long and colorful history. Two years before the Pilgrims in the Mayflower landed at Plymouth Rock, a French explorer, Etienne Brule, stared in amazement at the rushing waters and in 1668 Father Marquette established a mission there. In modern times the rapids proved a bottleneck to the transportation of copper and iron that had been discovered in the North Country. Charles T. Harvey, who came there in 1852 saw the great possibilities and he, together with John Burt, his engineer, completed the Soo Canal in 1855 – 100 years ago.

Strangely enough, the Soo is the least known of modern engineering achievements. When you view the ships that go through the locks on an average of one every 18 minutes, 24 hours a day, eight months of the year, you are astonished at the speed and ease with which the vessels are raised and lowered, so that a freighter which has been towering above you has, in a few moments, dropped so low that you are looking down on its deck. The Soo Locks are really a set of gigantic water elevators raising or lowering the ship over the hump of 18 to 20 feet between the level of Lake Huron and Lake Superior.

At present there are four locks operating on the American side and the chronological story is as follows: 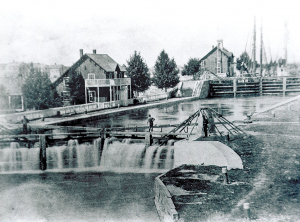 The Weitzel lock was built in 1881 with a length of 515 feet, 80 feet wide narrowing up to 60 feet at the gates, with 17 feet depth. This lock was destroyed in 1943 by excavation for the present MacArthur lock.

The four American locks take a force of about 175 men to operate them and in addition employ some 150 others as engineers, electricians, mechanics, clerical and mail clerks, laborers, etc.

It is wonderful to watch the colorful pageant of giant 600-foot ore freighters carrying 20,000 tons of iron ore, huge grain carriers with half a million bushels of wheat, oil tankers, trim private yachts, passenger ships, tugs and even rowboats, all crafts, no matter how large or small passing through the locks without any charge or expense.

The Soo locks do not belong to Michigan alone, or to the Midwest, but to all America. And all America is invited to celebrate the Centennial of this wonder of the modern world.

About the Author: This article was part of a 100th anniversary of the Soo Locks edition of Inland Seas.