The New England Transportation Company was never, so far as government records show, incorporated either federally or provincially in Canada, but by 1881 five steamers were operating under this firm’s name, cooperating in forwarding cargoes at uniform rates. Passenger fares were likewise uniform. The venture is perhaps unique in Great Lakes history. 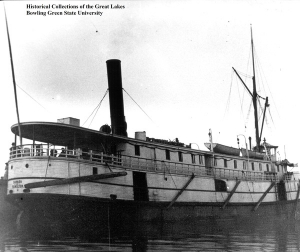 The story begins in 1872 when the single-masted two-deck, single­ screw, wooden passenger and freight canaller Canada was built at Hamilton by A. M. Robertson for four men: Captain J. B. Fairgrieve and Hugh Fairgrieve, shippers, of Hamilton; D. Butters, merchant and shipper, and T. Howard, gentleman, both of Montreal. The Canada, an excellent sea boat, had a length of 142 feet, beam of 23 feet 9 inches and a depth of 13 feet; 408 gross tons. She had one black stack, and a double row of cabins extending forward to the single mast which was stepped aft of the octagonal pilothouse. Her ordinary route was Montreal to Chicago, from which port she brought full cargoes of barreled salt pork and corn in bulk. Captain Fairgrieve was her master for the first six seasons.

The venture proved sufficiently profitable for the four shareholders to place mortgages on three other canallers so that by 1878 they had a controlling interest in the Columbia and California, built by Robertson at Hamilton in 1873, and the Lake Erie, built by M. Simpson at St. Catharines in the same year. In 1878 Captain Fairgrieve made the suggestion that the four canallers should be operated on a cooperative basis and when agreement had been arrived at, the New England Transportation Company, Collingwood and Chicago, came into being. The company name was painted in foot high letters on the white bows of the four canallers, either above or below their respective names, as, for instance: 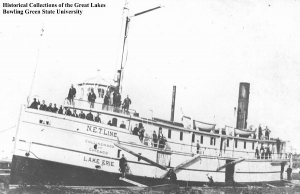 Instead of traveling the long and tedious canal route to Montreal, the cargoes of salt pork and corn were forwarded from Chicago to Collingwood, where the pork was transshipped to vessels that called at the sawmills along the east shore and North Channel of Georgian Bay, whence it was delivered with other supplies to the bush camps during the winter months. The corn was shipped by rail from Collingwood to Toronto, where it was milled into cornmeal.

A fifth vessel entered the combination in 1881 when the 156-foot wooden propeller Northern Queen (ex-Robert Holland) was chartered from the Great Northern Transit Company of Collingwood. With further regard to the Canada, it is recorded that blocks of her sixty-four shares changed ownership on various occasions until on April 7th, 1892, all were held by John S. Nesbit, of Sarnia, Ontario, subject to a joint mortgage held by the Fairgrieves of Hamilton. On July 7th of that year, her certificate of registry was closed, owing to an alteration of tonnage. The record of the other vessels is of greater interest.

The Columbia, built at Hamilton in 1873, had a length of 137 feet, beam of 23 feet 6 inches, depth of 13 feet 5 inches; 400 gross tons. She had originally operated between Montreal and Chicago, but when in the N. E.T. Line her course was between Collingwood and Chicago. 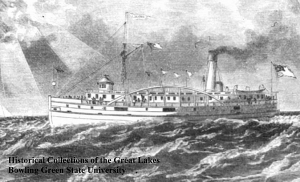 On September 10th, 1881, she cleared Chicago for Collingwood with Captain Malcomson, two passengers and a crew of twenty. Her entire cargo consisted of corn in bulk, valued at $14,000, and insured for that sum.

The same day, after sunset, she encountered a rising northwest gale in Upper Lake Michigan. The seas continued to build up, she began to roll heavily and the shifting corn cargo gave her a list to starboard. The crew made every effort to keep her trimmed, but without success. About 10:45 P. M. the entire cargo went out of place, and she wallowed helplessly with the heavy seas breaking clear over her deck and entering her cargo hold.

Captain Malcomson headed for land, hoping to beach her, but the water continued to gain and extinguished the boiler fires. Nothing then remained for those on board except to use the two lifeboats and attempt to reach Frankfort.

They were lowered and filled with the passengers and crew, but only one boat reached shore. The officers and passengers on board the other lifeboat were drowned, including Captain Malcomson, his mate, first and second engineers, two passengers, cabin maid, stoker, two deckhands, and five crew members whose names were unknown. Captain Malcomson was about fifty-five years of age, and an experienced navigator.

Next for our consideration is the single-screw wooden passenger and freight canaller Lake Erie, built at St. Catharines in 1873 by M. Simpson for the Lake and River Steam Navigation Company of Hamilton. Her length was 136 feet, width 25 feet 4 inches, depth 7 feet 4 inches; 414 gross tons. She had a single black stack aft, and a single sail-rigged mast stepped back of the octagonal pilothouse. A long cabin on the top deck provided accommodation for passengers, and four lifeboats were cradled amidship, atop the cabin. Wood was used for fuel. Her sail was hoisted when the wind was favorable. She had the reputation of being an excellent seaboat.

On November 24th, 1881, she foundered off Poverty Island in northern Lake Michigan after colliding with the steamer Northern Queen ( ex­ Robert Holland) during a snowstorm, as related in the paragraphs that follow.

The single-screw wooden passenger and freight steamer Robert Holland (US 110043) was built in 1872 at Marine City, by Anderson, for Robert Holland of Port Huron, where she was registered. Her length was 156 feet, width 30 feet, depth 11 feet 4 inches; 423 gross tons. She had a single black stack aft and a single sail-rigged mast stepped back of the octagonal pilothouse. Wood was used for fuel, and her engine delivered 555 horse power. Her crew numbered twelve. She was built with side strengthening arches and a long top deck cabin provided passenger accommodation. Four lifeboats and their davits were atop the cabin amidship. Her hull was painted black as far up as the side strake, and the entire superstructure was white. 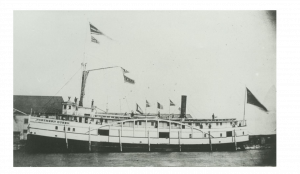 In 1878 she was sold, Canadian, to the Great Northern Transit Company of Collingwood and her name was changed to Northern Queen. In the spring of 1881 she was chartered by Captain J. B. Fairgrieve.

On November 23rd, 1881, the Northern Queen and Lake Erie cleared Collingwood together on their season’s final trip to Chicago. The following day they unfortunately collided in a snowstorm off Poverty Island in northern Lake Michigan. The Lake Erie was badly damaged and foundered shortly after her crew had been taken on board the Northern Queen. The latter steamer was beached west of the harbor piers at Manistique, Michigan, and both crews landed safely, but the vessel was damaged by storms during the winter, and was abandoned to the underwriters.

In 1882 a salvage firm towed her hull to West Bay City to be rebuilt at the Davidson shipyard. She was renamed Robert Holland and sold to her original owner in Port Huron. After further service of 33 years, her end came on May 11th, 1915, when she burned at Sturgeon Bay, Wisconsin.

We will close with an account of the wooden canaller California (Can. 853 09). She carried passengers and freight and was built in 1873 at Hamilton by A. M. Robertson for Crangle and Geddes of Toronto. Her length was 137 feet, width 23 feet 6 inches, depth 13 feet 5 inches; 450 gross tons.

For four years she was operated on the Montreal to Chicago route. In 1877 she was mortgaged by D. Butters and others in Montreal. From 1878 to 1883 she was routed by the New England Transportation Company.

In 1883 she was rebuilt and lengthened at Port Dalhousie, to take advantage of the enlarged Welland Canal locks, with a new length of 179 feet 5 inches, width 25 feet, depth 11 feet; 901 gross tons. She was then returned to her original route between Montreal and Chicago .

On October 1st, 1887, she cleared Chicago for Montreal with a cargo of corn in bulk and barreled salt pork, three passengers and a crew of twenty-two. Early on October 3rd she ran into a heavy northwest gale above Beaver Island, and while seeking shelter at the west entrance to the Straits of Mackinac she grounded off St . Helena Island. All her cabins were washed oil, and five persons were drowned.

She was abandoned to the Western Insurance Company, who sold her to Edward S. Pease of East Saginaw. Her hull was pumped out, and floated in September, 1888, then towed to Bay City, and rebuilt as a steam barge, christened Edward S. Pease (US 136025 ).

Shortly afterward she was documented at Port Huron as owned by Joslyn and Currie. Her dimensions were then listed as, length 168 feet, width 26 feet 4 inches, depth 11 feet 6 inches; 716 gross tons.

During the years that followed she changed ownership several times, and in 1890 turned up in the Cleveland Cliffs fleet.

In 1902 she was sold to Captain Benham and others of Cleveland, Ohio. Her end came on November 24th, 1904, when she was completely destroyed by fire while unloading coal at the Tannery Dock in Collingwood harbour.