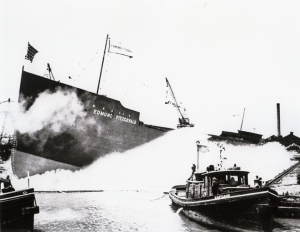 The launch of the EDMUND FITZGERALD

An event of interest to all Great Lakes historians occurred on June 7th of this year. “Hull 301” of Great Lakes Engineering Works, River Rouge yard, was christened the Edmund Fitzgerald, and launched and delivered for service later this season.

This ship will have the unique opportunity to commemorate a number of important pages of history. She will be physically suited for that task, for she will be a prototype, setting precedents for the future. Her ownership, operation and design will combine to support her leadership.

This is how the pages of the past converge on the Edmund Fitzgerald: First, the vessel’s owner, The Northwestern Mutual Life Insurance Company of Milwaukee, Wisconsin, celebrated its 100th birthday in 1957. Its Home Office looks out over Lake Michigan and Milwaukee’s fine harbor. During the Company’s 44-year occupancy of its present home office site near the eastern end of Milwaukee’s Wisconsin Avenue, its occupants have had a point of vantage from which to observe the comings and goings of Lake vessels, to and from its harbor or passing by, en route to Chicago, loaded with the raw materials which make power and steel. In this parade also, are the railroad carferries and the tankers and automobile carriers which serve the area. Northwestern’s century-long relationship to the State of Wisconsin, Milwaukee and Lake Michigan, forms a natural backdrop for its investment in the Lake shipping industry.

Then, there is the vessel’s charterer, Oglebay Norton Company, whose predecessor constituents passed their 100th birthday in 1954. Until October 1957, Oglebay Norton’s Lake shipping was performed by The Columbia Transportation Company. Into this shipping affiliate were merged1 last fall, ten of its related companies, and co-incident with the merger, the surviving corporation then became Oglebay Norton Company. The new corporation today designates its shipping function, the “Columbia Transportation Division.” Thus, another century-old historic enterprise was brought into focus by this pooling of interests in Lake vessels, iron and coal mines and Ferro Hot Top production for the steel industry, all of which had long been identified on the Lakes through the management of Oglebay, Norton & Company of Cleveland, Ohio.

The Board of Trustees of Northwestern, with the concurrence of the management of Oglebay Norton, chose the name Edmund Fitzgerald for the new ship to honor and respect Northwestern’s new Board Chairman, who moved from the presidency on May 1, 1958 after serving his Company successively as Vice-President and President for twenty-five years. 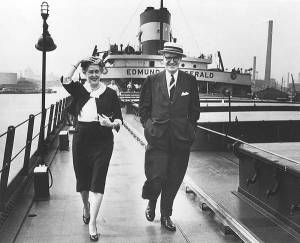 Mr. & Mrs. Fitzgerald walking along the deck of his namesake.

However, the new vessel’s name not only does honor to Mr. Fitzgerald’s contribution to his company but it also carries along in the pages of Great Lakes history a family name which has been a working part of the industry for three generations. Mr. Fitzgerald’s paternal grandfather, John Fitzgerald, and John’s five brothers were captains of Great Lakes sailing ships. His father, the late William E. Fitzgerald, was president of Milwaukee Drydock Company and shortly before his death in 1901 merged this company into The American ship Building Company of which he became a director and member of the Executive Committee, as well as Assistant General Manager. The Milwaukee company operated shipyards located on the Kinnickinnic River at the foot of East Washington Street and on the Menominee River at North 6th Street in Milwaukee.

The vessel, designed and built by Great Lakes Engineering Works, will be the largest carrier on the Lakes. Her length and beam are approximately at the maximum permissible by United states and Canadian seaway authorities at the present time.

The Edmund Fitzgerald will join three other Lake vessels purchased in 1957 by Northwestern from Great Lakes Steamship Company2 for its investment portfolio.

These three are the Joseph S. Wood, the J. H Hillman, Jr., and the J. Burton Ayers. Each is under long-term charter to Wilson Marine Transit Company of Cleveland.

Northwestern Mutual’s active interest in Lake ship and river vessel financing has brought to it a substantial amount of securities during the last eight years. This financing has assisted in the initial construction or conversion of ten Lake vessels and the acquisition by one carrier of four other ships. Twenty-two modern Dieselized river towboats and over 215 river barges can trace their existence to Northwestern’s loan portfolio.

As has been the case on the Great Lakes, the availability of insurance investment funds has also assisted in the modernizing and development of larger, more powerful and more efficient river vessels.

The Columbia Transportation Division of Oglebay Norton Company and Northwestern Mutual believe that the Edmund Fitzgerald will fully justify their joint hopes that she will carry on the century-old traditions of both companies by making worthy performance records over the course of her active life.

About the Author: Mr. Cristal is Manager of Transportation Investments of The Northwestern Mutual Life Insurance Company, Milwaukee, Wisconsin. Both be and Mr. Edmund Fitzgerald are members of the Great Lakes Historical Society.