The flurry of canalization and the gala events associated with the opening of the imaginative St. Lawrence Seaway, recall the vibrant canal period in pre-railway North America. And behind the bright trappings are also recollections of the individual visionaries who were willing to jeopardize their small fortunes on adventures in canal building and developments in water transport. One unheralded hero of water-borne commerce in western Upper Canada was Absalom Shade of Gait, who, in three successive years, risked his life, reputation, and money, in an attempt to prove the middle Grand River navigable. This adventure was conceived 130 years ago, the year that the first Welland Canal was completed.

Shade had had no previous experience in either navigation or boatbuilding, as far as we know. But, being an excellent carpenter, he was able to construct craft of simple design, probably similar to the open, flat-bottomed ones he had seen operating on the Erie Canal. This astute Pennsylvanian had brought with him the spirited initiative which characterized many men in the “unfolding West” of that time, and he had proven himself the leading citizen of the township. 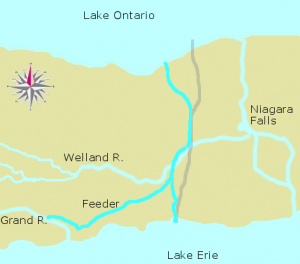 The complete First Welland Canal including the Feeder Canal and the extension to Port Colborne. The present-day canal is marked in pale grey

One obvious drawback to the settlement around Gait was a large, treacherous swamp which blocked the main road to the head of Lake Ontario and the favorable markets there. As an alternative, Shade envisioned a fleet of barges which would cruise down the Grand River on the swell of Spring floods, carrying with it products from the increasingly successful settlement. The new Welland Canal, with its feeder reaching to the Grand at Dunnville, would provide easy access to Lake Ontario. On this stimulus he made a bold decision in 1830, which was carried to fruition in 1831, when, as described by James Young in his Reminiscences of the Early History of Galt:

he … built several flat-bottomed boats which were called “Arks.” These were each of sufficient capacity, being 80 feet long and 16 wide, to carry about 400 barrels of flour. They could only be used during the spring floods, and it was an exciting time at the little wharf at the end of the bridge when they were being loaded.1

Adam Fergusson, a traveling Scotsman, also had a taste of this excitement, as he recorded in his notes:

A son of Mr. D …. was at this time just returned from an experimental voyage, in company with Mr. S,, by which the important fact was ascertained that the Ouse [Grand] affords a safe communication with the Welland Canal, a distance by water of 100 miles. [Recorded May 14, 1831.]2

It is true that there had been a precedent of sorts in May 1827, when an attempt had been made to run a pleasure barge from Gait to Brandtford, carrying some British visitors who came to the village with John Gait. As might have been expected, a grounding terminated four or five miles of smooth sailing, and the passengers were fortunate not to have lost more than their composure. Gait remembered this incident when he was writing his autobiography:

. . . as the Grand River never had been properly explored, we caused a scow to be built to descend the stream, and embarking at the bridge of Gait, set out with the current to name the most remarkable islands and headlands in its course. . . .

. . . a violent rapid was hailed … “Horton’s Hurries.” But in sailing over it, a rock in the most spiteful manner so damaged the scow that she was more than half full before we could get the ladies landed.3

The Arks were mammoth, impressive craft, even in those lusty and unpredictable times. Certainly they would fit comfortably into the new Welland Canal locks, which were 100 feet by 22 feet; but they were twice as big as the well-known Durham boats, or more precisely, the batteaux, described by Picken as “forty feet long, six feet broad, flat­ bottomed, and draw about 20 inches water. … The batteaux will carry about six tons….”4 And they were also larger than the Erie Canal scows, which had to fit into locks only 90 feet by 12 feet. 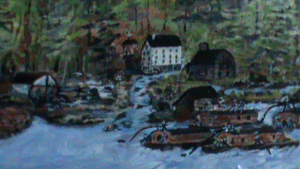 A rough painting of Shade’s arks

Shade built his barges chiefly of pine beams, and he designed them of shallow draft specifically to baffle the fickle stream from Gait to Brandtford. The surveyor of the township, in his traverse of the river valley, had recorded for this stretch many parts where “rocky flats and rapids” threatened a boat passage, and where islands, such as the “Mississauga islands,” complicated navigation. The great elbow in the stream, however, provided an exception: there the Grand was “narrow and very deep” and it contained a “Sturgeon hole.”5 South of Paris lower banks became a more common margin for the broadening River, and from Brandtford downstream the barges had relatively little trouble, although major improvements for navigation were not inaugurated until 1831.6 The journey from Gait to the mouth of the Grand was about fifty-eight miles, and the total distance to Port Dalhousie, on Lake Ontario, was 100 miles. In his report on the canal, Bouchette subdivides the canal portion of the journey: 16 miles from the Grand River to the Welland River (by the Feeder Canal), ten miles in the Welland River itself, and 16 miles from this River down the escarpment to Lake Ontario.7 There was no means of locomotion or steering built into the barges. The roaring River swept them downstream from Gait. Navigation of the frenzied course was a strenuous game, which depended on the five or six pole­men who rode each craft. When the canal was reached, horses were secured for towing. The complete descent to Lake Ontario took about four days, half of the time being spent in the canal.

“The cargo,” Young has told us, “consisted chiefly of wheat, coarse grains, highwines, pork and furs, and was of considerable value, embracing a large portion of the results of the year’s business.”8 The choice of products nicely reflects Shade’s function in the community. He was, as has been said, the leading citizen of Dumfries Township; Fergusson found him to be “an intelligent, enterprising American.”9 In 1816, as a young carpenter who had only shortly before left the States to work around Niagara, Shade had been chosen by William Dickson, the owner of the lands of the Township, to set up the chief village (at Gait), and to oversee the progress of the settlement. Shade took full advantage of his seignorage, purchased some of the most promising waterpower sites in the township, eventually set up one of the largest grist mills in western Upper Canada, and gained a monopoly of both the credit and the cash stores in Gait. These commercial facets, then, explain the flour, wheat, and coarse grains; and, also, the highwines, pork, and furs, which were probably taken in at his credit store. But Shade’s plan did not finish at that: he arranged for the sale of the barges themselves at their destination, and they called in a good price either because of their usefulness as barges, or because of the timber in them.

The settlers who constituted the Dumfries settlement – and particularly those around Gait – were mainly Scotsmen. They were caught up by Shade’s initiative, and gladly assisted in the construction of the six or seven barges. But, there were also times when they were slightly amused by this opportunist of the wilderness, and it is likely that the whimsical christening of the barges “Shade’s Arks” was celebrated with generous amounts of wit in the inns of the village. The name seems likely to have come from the “Kentucky Arks” which were familiar to immigrants who had passed through the St. Lawrence canals, but it certainly had a strong Biblical connotation as well for the Gait people. Of the 2,500 settlers in Dumfries Township in 1830, probably 1,700 of them were within Gait’s economic net. 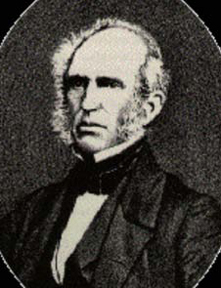 The successful arrival in Lake Ontario of the strange armada from the middle Grand, under the captaincy of Shade, seconded by William Dickson, Jr., sparked the jubilation which demanded a repetition of the feat. So, in 1832, a second group of barges plunged down the Grand to Lake Erie, and then through the Welland Canal to the Lake Ontario ports.

But the success was far from unqualified. In the navigation of the Grand there had been many perilous moments; and although Shade claimed a two-thirds reduction in transport costs, there were the involvements of trying to dispose of the goods and the barges at the undeveloped Port Dalhousie market, or arranging transport for thereto Dundas.

At the third attempt, in 1833, the combined opposition of climate and geomorphology harried the Gait “voyageurs,” and finally brought them down to defeat. The Spring floods were lower than usual, and, as a result, many more islands and rapids severed the surface of the River. The first of the Arks discovered a “Mt. Ararat” in the riverbed near Middleton (Glenmorris), and, much more rudely than its Biblical counterpart, foundered and broke there. Although little cargo was lost, Shade’s dream abruptly darkened. It was obvious that the Spring floods could not be relied upon.   The failure of the flow, which brought to distress the pleasure cruise of 1827, was likely to recur periodically. The barges eventually reached their destination in Lake Ontario, but Shade sold with them his ideas of navigating the middle Grand River. The Arks were not perpetuated in legend, and have been only casually remembered by history. Soon after their demise dreamers took to the thrill of the steam locomotive, and boats were put away for a while.

About the Author: Mr. J. David Wood is a resident of Toronto, and teaches in the Department of Geography at Edinburgh University. He is presently pursuing studies in Scottish migration to western Ontario, which be began at the University of Toronto.