On the eve of the Civil War, Chicago was already the largest grain shipping center in the country, having displaced New Orleans through the opening of the Illinois and Michigan Canal. That waterway became a feeder for the Great Lakes and 500 ships were employed in the grain trade. These cargoes sailed east to Black Rock above Buffalo, at the head of the Erie Canal to feed the eastern seaboard. Grain bound for export to Europe went to the Canadian railheads in Georgian Bay at Goderich and Kincardine as well as Sarnia on Lake Huron. The grain shipments continued to multiply with the growth of the breadbasket at Chicago’s back door.

Over in Michigan’s dual peninsulas the greatest lumber operations in our then history were taking place. So intensive was this activity that by 1862 Chicago displaced Bangor, Maine as the world’s greatest lumber receiving and re-shipping center. The forests of Michigan covered 95% of the state’s area and were then believed inexhaustible, a fact later disproved.

Thus, in mid-nineteenth century the Great Lakes area saw an immense fleet of sailing vessels built to carry the cereals and lumber.

From April until December, during the sailing season, each newspaper published a Marine Intelligence column listing arrivals and departures and all the information pertinent to the lake faring gentry. In these columns could be found the news and activities of the ship builders, vessel owners, sailing masters, port authorities, coast guard, tugboat companies. bridge-tenders and all other floating interests. Yet, to follow the career of a ship from the laying of its keel in the shipyard to its final abandonment or disaster, one must consult thousands of newspapers to trace her wandering. In this manner the forty-four year career of the Rouse Simmons was brought together. It was only one of 2000 ships of sail but it was built in the days of the state of its most advanced art and sailed well into the sunset era of the schooner fleet. 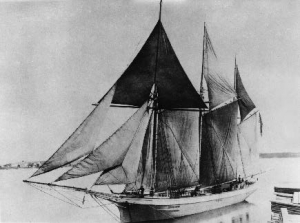 The Rouse Simmons was built in 1868 in Milwaukee for Kenosha ownership. Her keel was laid in March and by August the vessel was launched. Her cost was $14,000. After being documented by the government her maiden voyage was made in early September. She sailed in light trim for Manistee, Michigan to pick up a cargo of lumber destined for Chicago. This was the first of more than a thousand ship arrivals in Chicago harbor during her lifetime. The ship spent her entire career in the lumber trade carrying scantling, joist, lath, shingles, cedar posts, railroad ties, telegraph poles and tanbark. The vessel was named for a member of a family prominent in the commercial and industrial life of Kenosha. The same family later founded the Simmons Bed Company. Oddly enough, the ship’s namesake never owned a plank in the vessel but his family was instrumental in funding its construction.

She measured 127 feet overall; 27½ feet of beam; 8 feet depth of hold and 220 tons burthen; three masts, fore and after rigged, with square sail on top mast, specifically designed for the lumber trade.

In 1869, during her first full year, twenty-six arrivals were registered in Chicago harbor all lumber laden from Manistee. Her carrying capacity was normally 200,000 board feet of lumber but this was increased by 10 percent during the balmy summer sailing. In the fall when “Old Boreas” made his appearance, her cargoes were shortened to 180,000 feet by the reduction of deck loads and out of consideration for the underwriters.

During this same year there were 13,730 arrivals recorded by the harbor master in Chicago. This exceeded the total number of vessels entering the salt water ports of New York, Philadelphia, Baltimore, Charleston, Mobile and San Francisco combined. True, the tonnage of some of these ports was greater than Chicago, ocean-going vessels being larger, but the comparison is all the more striking when we remember Chicago’s sailing season was only eight months while the salt water ports were open year ‘round.

The Chicago River and branches was known as the harbor and as many as 120 ship arrivals were logged on a single day but the average for the sailing season was slightly more than fifty daily. From its mouth to Van Buren street the river was spanned by a dozen pivot bridges which opened and closed by turning on their midstream piers. The rapid and easy movement of these bridges was one of the sights of the city, but their frequent opening and closing was no trifling annoyance to the landsmen who complained of being “bridged” during such delays. The ships of sail were helpless in the harbor being in the tow of tug boats and jousts between ship and bridge were frequent. Hundreds of such collisions occurred annually. In this atmosphere the Rouse Simmons made her debut and Lake Michigan and Chicago harbor became her arena for almost half a century.

After four years in the service of Kenosha the Rouse Simmons was sold to Charles H. Hackley of Muskegon, formerly of Kenosha. He was perhaps the wealthiest of the forty Muskegon lumber barons of that sawdust city and his company owned a fleet of as many as seven ships during the heyday of lumbering in the 1880’s. Of all the floating property owned by Hackley, the Rouse Simmons was his workhorse for the longest period, twenty-six years. Should you go to Muskegon today you will find a park, a library, an art gallery, a high school, a church and monuments to Lincoln and McKinley, all the gifts of Hackley to his adopted town. I believe some of this philanthropy was made possible through the earnings of the Rouse Simmons.

During the quarter of a century spent in the Hackley fleet the vessel saw her share of glory and frustrations. Collisions with other ships under fog bound conditions disabled the vessel on two occasions. The vessel lost her jib-boom or cathead several times in harbor accidents placing her in dry dock for repairs. On some late season voyages the vessel came into the harbor iced up at the bow and on her sides, her deck load either jettisoned or greatly reduced, with three or four feet of water in her hold and the crew thoroughly exhausted from incessant manning of the pumps.

Several deaths occurred during her Hackley period. Once an unlucky deck hand fell from her topmast. Another time a hand fell overboard and still another was crushed by the hull of the ship coming against the pilings. The most spectacular death occurred in 1875. One William Rothwell, an English born sailing master was given command of the ship in spite of the fact he had a drinking problem. Late in the season when storms were the rule on the lakes, the ship incurred some minor damage each trip that could usually be accounted for. In a mid-November storm, however, she lost her mainsail and used a full week for the 200-mile trip from Muskegon, and upon arrival in Chicago she ran against the pier and lost her anchor. This brought about Rothwell’s discharge and after fortifying himself with strong waters, he checked into the Sherman Hotel and committed suicide by morphine.

The third owner of the ship, a Chicago sailing master, used the vessel in the lumber trade but the receding forests made necessary trips of longer distances, hence her arrivals in Chicago were substantially reduced. In October of 1904, while loading at Torch Lake in the east arm of Grand Traverse Bay, she was caught at her moorings by a northwest gale that kicked up a wicked sea and started the vessel pounding against the pilings. To save the ship from breaking up she was scuttled and settled to the bottom in fifteen feet of water. Sitting thus she was sold to a Beaver Island sailing master, raised, pumped out, jacketed and floated to Charlevoix where she wintered. The following spring, she crossed Lake Michigan at the end of a towline while the men at the pumps kept her buoyant. Up on the boxes at Sturgeon Bay the vessel received a complete refit and was placed in the tanbark trade between Beaver Island and the tanneries in Milwaukee.

In the fall of 1906 the vessel was dismasted in a violent gale and was given up for lost when the Grand Haven Car Ferry picked her up and towed her into Milwaukee harbor. She was again refitted and sailed for three years without mishap. 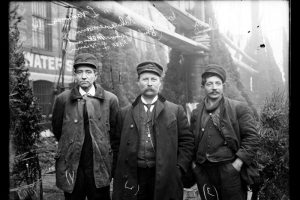 The most romantic period in the life of the Rouse Simmons began in 1910 when a part ownership in the vessel was purchased by Herman Schuenemann, a member of the Chicago family associated with the Christmas tree trade.

Since 1884 Herman and his older brother, August, had brought holiday greens into Chicago on the final voyage of the sailing season and sold them from the deck of a schooner. For over a quarter of a century a dozen ships, either owned or chartered, brought their evergreen cargoes into Chicago.

In 1898 August lost his life and his cargo of greens off Glencoe when the schooner Thal went down with all hands. Herman, however, continued to follow the Christmas tree trade and as each ship fell by the wayside through attrition he finally came to own a part of the Rouse Simmons.

In 1912, the third Christmas tree voyage made by the vessel departed Thompson in Michigan’s upper peninsula in a rising gale. The next day she was sighted off Kewaunee, Wisconsin flying distress signals. Although the coast guard went to relieve the ship, the weather closed in and she was heard from no more.

Barbara, Herman’s widow, continued the business, but her greens came in by rail and were transferred to a show case ship chartered for the purpose. She continued the family enterprise for twenty-two years until her death. Her daughters erected a gravestone over her ashes, and although Captain Herman’s body was never recovered, his name shared the marker with Barbara. It stands in Acacia Cemetery in Chicago and between the two inscriptions is graven a Christmas tree.

During the years following the sinking of the Rouse Simmons, fisherman in the vicinity would frequently bring up their nets clogged with Christmas trees. Once a wallet wrapped in oil skin was picked up on the beach at Sheboygan containing many items personal to Captain Herman.

Fifty-nine years after the Rouse Simmons was lost it was inevitable that a scuba diver should find himself on the deck of the sunken hulk. A Christmas tree, or what was left of it, was brought up and displayed in the counting room of a Milwaukee bank during the Yule season of 1971.

Later the anchor was raised and incorporated into a monument that stands at the entrance of the Milwaukee Yacht Club. The mainmast, too, was retrieved and serves as a flagpole on the estate of the scuba diver.

About the Author: Theodore Charrney began work at various jobs in 1923, but in 1928 he began a maritime career, fresh-water and salt, which endured until the fall off of shipping in the depression of 1934. He has been researching marine subjects for many years.