Among the many unique and innovative features onboard Captain Alexander McDougall’s whaleback barges and steamers — the round turrets, the semi-arched spar deck, the flush mounted hatches and the upturned bow, to name just a few — there’s one small element that many folks overlook or, if they do happen to see it, don’t recognize it as one of the many patented ideas from Captain McDougall’s fertile, almost non-stop imagination. The item in question? It’s that triangular shaped what-cha-ma-call-it attached to the foredeck of, at one time or another, almost every whaleback vessel. Universally known as the “McDougall anchor,” most whalebacks had at least one of the anchors secured aside their bow turrets, while a fair number of the whalebacks carried two of the utilitarian anchors. As with many of the new and original concepts incorporated into the de- sign of the whalebacks, the McDougall anchor can be included on the list of ideas that were haltingly accepted by the Great Lakes sailing community at the outset of the construction of the whalebacks and died very quickly with the demise of the company that constructed the whalebacks, the American Steel Barge Company, just a decade later. 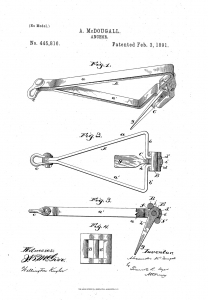 The design of Captain McDougall’s anchor was granted patent number 445,816 by the United States Patent Office1 on 3 February 1891.2 McDougall had submitted his short, three-page patent application (one and a half pages of written specifications and one page with four diagrams of the anchor and parts thereof) for the anchor on 24 March 1890.

Although a patent related to some aspect of water transportation was hardly an unusual occurrence for Alexander McDougall (he applied for and received more than 50 U.S. and foreign patents in his lifetime),3 the timing of McDougall’s anchor patent seems quite telling. It’s almost as if McDougall had to push himself further and further, harder and harder, every minute of every day so that he could see just how much he could accomplish. It seems at this exciting time in his life that McDougall couldn’t stop himself from engaging in a wide range of semi-related activities in, perhaps, some sort of internal effort to justify the faith and trust so many people had placed in him. McDougall was neck deep in is so many complex business processes at the time he submitted his anchor patent that completing any one of them, much less all of them, would certainly be a mark of stellar personal achievement. In March of 1890, the time he sent in the preliminary patent application paperwork, McDougall was in charge of the newly formed American Steel Barge Company. This company was undergoing an expansion program of additional employees, burgeoning size and increased production that would make any of today’s Fortune 500 companies turn absolutely green with envy. At the same time McDougall was supervising the final construction details of two whaleback barges, Barge 105 and Barge 107, he was in the middle of the construction of the first whaleback steamer, the Colgate Hoyt,4 in his Duluth shipyards while tending to the long distance management of the building of two more whaleback barges, Barge 201 and Barge 202, at the Handren and Robins Atlantic Dock Company in New York City.5 McDougall was also overseeing thousands of details associated with the transfer of the American Steel Barge Company shipyard lock, stock and whaleback plans from Duluth to West Superior, Wisconsin, and the setting up of an entirely new whaleback shipyard.6 Just so his down time was kept to a minimum, McDougall and his staff were in the midst of planning the construction of the Joseph L. Colby, the first whaleback to be built in the new West Superior shipyard. By any conceivable stretch of the imagination, McDougall’s plate was extraordinarily full and yet he found the time and energy to think about, design, refine and put pen to paper to document and protect his ideas for a new fangled anchor. 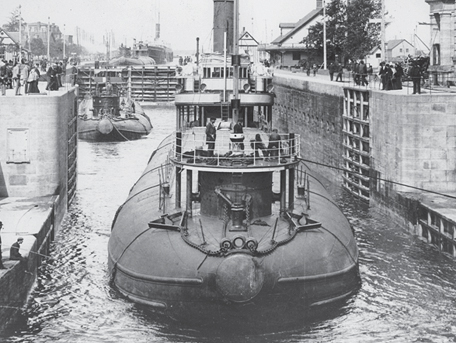 The whaleback steamer James M. Colgate towing a whaleback barge as they exit the Soo Locks sometime in the late 1890s or early 1900s. The two McDougall anchors on the bow of the James M. Colgate (lying on the deck to each side of the bow turret) can clearly be seen. Image from Great Lakes Historical Society Collection

In his patent specifications, McDougall detailed his reasons for deciding that his new type of anchor was needed by saying, “The principal objects of my invention are to provide and produce an anchor of that variety which can be manufactured very cheaply, which will be extremely portable and occupy little space on the deck, and will be very effective in operation.”7 In keeping with McDougall’s somewhat utilitarian view of the world, the anchor was simplicity itself. McDougall described his new invention as a “… stockless single-fluke…” anchor.8 McDougall seems to have distilled to the most basic level what the elements of an anchor needed to be and fairly much eliminated anything else that was not directly and specifically related to the function of the anchor. No frills and no creature comfort additions — very much like his whaleback vessels.

McDougall’s simple, triangular shaped anchor was formed by bending two, 7 inch wide by 3¼ inch thick by 12½ foot long9 “… rectangular wrought-iron or steel bars heated and hammered to the proper shape”10 bands into identical shapes to form the two sides of the anchor. A ring for the anchor chain was bolted between the shaped steel bands at the top of the anchor. Between the bands at the bottom of the anchor a simple, pivoting single fluke (or “blade”11 as McDougall sometimes called it) was placed. When completed, the anchors were ten feet four inches in length, five feet wide at their widest point and weighed approximately 2,050 pounds apiece. The flukes were eleven and a half inches wide and just a hair over four feet long.12 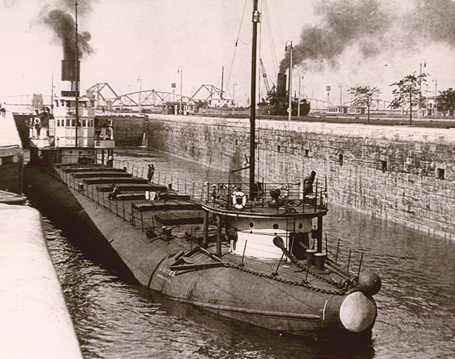 The steamer Pathfinder at the Soo Locks has its McDougall anchor secured to the deck next to the bow turret. Image from The Great Lakes Historical Society

Interestingly, as with so many of McDougall’s patents, including the whaleback turrets and the rudders attached to the pig boats, a subtle progression of design can be seen from his initial patented drawings and ideas to the final product sailing onboard the whalebacks. McDougall’s patent design presented a blunt end on the fluke while the anchors were actually manufactured with a semi-pointed end.13 The pivoting mechanism (McDougall labeled this “…a link mounted on the pivoting-pin”…)14 which allowed the fluke to dig into the lake or sea bottom but limited its range of motion, was slightly altered to become a single unit, as opposed to McDougall’s original concept of several different component pieces bolted together. The anchors, made at the American Steel Barge Company shipyard in West Superior, were retrofitted on a number of the earliest whalebacks and became standard equipment for the later barges and steamers that were constructed in the shipyard.

According to the Lake Superior Marine Museum website, “It is believed that about 50 of these anchors were produced by the American Steel Barge Company in Superior, Wisconsin.”15 As previously indicated, while sailing the Great Lakes, the vast majority of the whalebacks, both barges and steamers, had at least one McDougall anchor on their bows. Today, only two of McDougall’s anchors are known to exist on dry land. One of the anchors, from the famous whaleback passenger steamer Christopher Columbus, was given to the Mariners’ Museum in Newport News, Virginia, in 1936, after two of the Museum’s field agents found the anchor in the scrapyard of the Manitowoc (Wisconsin) Shipbuilding Company as the Christopher Columbus was being cut up. The anchor is stored at the Museum “anchor farm” in Newport News and is not currently on public 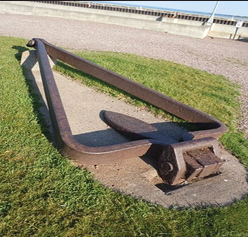 The McDougall anchor from the wreck of the Thomas Wilson is now on display in Duluth’s Canal Park. Image from author’s collection.

display.16 The second McDougall anchor, the port anchor from the wrecked whaleback steamer Thomas Wilson, is on display outside the Lake Superior Marine Museum at Canal Park in Duluth, Minnesota, just a few feet from the waters of Lake Superior and less than two miles from the location of the wreck of the Thomas Wilson. The anchor was located by Duluth diver Randy Bradford during the summer of 1978 and, with the assistance of several private boats, raised and recovered for display. The anchor now sits next to the starboard kedge anchor recovered from the Thomas Wilson by famed Duluth diver Elmer Engman during the summer of 1973.17

Much like too many of McDougall’s inventions, his anchor was close … but just not quite. By most reports, the McDougall anchors were not the most efficient of tools for keeping a boat in a specific location due, for the most part, to the anchor’s single fluke. While being a novel and money-saving idea, they often failed to secure the boat to the lake bot- tom. Many times McDougall’s anchors allowed the whalebacks to drag their anchor significant distances until the crew took the pains to raise the anchor and reset it. As a result, the anchors failed to gain any interest from other ship owners and were destined to sail only aboard whaleback steamers and barges. There are no known reports or photographs of any other Great Lakes boat using the McDougall anchor. Although they were not popular, the anchors did, in some cases, accompany the whalebacks during their transfer to saltwater service in the years between 1905 and 1912. The same problems that dogged the anchors on the sweetwater hounded the anchors in saltwater and the McDougall anchors were, one by one, replaced on the seagoing whalebacks with standard anchors.

The McDougall anchor was another of Captain Alexander McDougall’s seagoing experiments that never quite caught on. The anchors went the way of the whalebacks, failing to gain popular support and fading into history as little more than a footnote in the lore of the Great Lakes.

About the Author: Neel R. Zoss has researched McDougall’s whaleback barges and steamers for many years and has written a number of articles about the boats, including several in Inland Seas.