Today, I suppose, when little boys are talking about gas-powered airplane models and are eagerly following the exploits of Superman and Captain Marvel, they do not spend as much time hunting the beaches for certain stones and shells as they did when I was of grade school age. To me, the beaches of Lake Erie were filled with strange and exciting things in those days – things which would be just as strange and exciting now if boys were not so engrossed in pilots and parachutes. 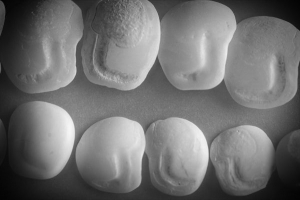 There was a time, not so long ago, when the proud possessor of a “lucky stone” from the beach was a boy or girl to be envied. To have a matched pair of such stones was almost better than having a knife with the new stainless blades or having a siren on one’s bicycle. These lucky stones are attractive bits of material, usually found just at the water line or slightly above it. They are flat and thin, with a square outline, and may vary in size from about an eighth to nearly half an inch on a side. Each stone has on it, engraved in a delicate groove, the letter L, the two limbs of which are about the same length. The stones are quite as white as porcelain and exhibit a lovely mother-of-pearl finish when viewed in the right light. I have found that if one is persistent enough in his hunting, and if he looks long enough among the windrows of small pebbles at the water’s edge he may find a matched pair of lucky stones.

What are these bits of white which we used to treasure? The answer is quite simple, as is also the explanation of their occurring in sets of two. The fresh-water drum, or sheepshead, carries them in his ears, building them up from the lime salts which occur in minute quantifies in the lake water. When a fish dies, its body, unless eaten by a scavenger, is cast upon the shore. As the flesh disintegrates the stones drop from the rotting head and remain among the beach pebbles, a memento, as it were.

I mentioned the fact that the stones are carried in the ears of the fish. Does this mean that the fish hears as we do? Well, probably not in the way that we hear. What we call the ear of a fish is simply the balancing organ which zoologists will tell you is the forerunner of our own inner ear mechanism, the balancing part of which is just like that of the fish.

It should be mentioned here that the sheepshead is not the only fish that produces ear stones. Most other fishes have something comparable, but in many cases the stones are soft and not very resistant to destruction, and in certain instances there are numerous fine particles produced instead of one large stone for each ear.

To get back to the balancing organ. The structure is a paired one. Each ear is a delicate set of membranous bladders and tubes, snugly embedded in the skull of the fish. There is, of course, one organ on each side of the brain, just behind the fish’s eye. The balancing organs are pretty important, since a fish frequently finds himself in the position of an aviator, who is flying inside a fog or cloud, and can see nothing by which he can estimate his own path. It is by means of these wonderfully constructed sense organs that our sheepshead is able to swim on a straight course, even though he is able to see nothing but an unbroken field of green water all around. The ear thus acts like sort of a bank-and-turn indicator. 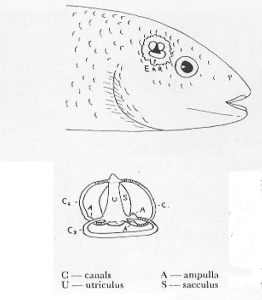 The little pictures which I have provided will show something of the nature and position of the ear of the fish. Each ear lies within little cavities in the skull, protected from bumps and jolts. When removed by painstaking dissection, we find that it consists of two little bladders, the utriculus and the sacculus. “The utriculus has, extending from it, three fine tubes of membranous consistency. The tubes are loop-like and each one is attached to the utriculus in two places. The position in which the tubes lie is important. One extends laterally (with respect to the long axis of the fish) and in a horizontal plane; the other two are in vertical planes which lie approximately at right angles to each other. The utriculus, the three little semicircular canals, as the loops are called, and the sacculus are all filled with fluid which is able to flow through the canals and bladders should the occasion arise. ‘The occasion does arise, as we shall presently see.

Careful examination of the semicircular canals reveals that each canal is not of uniform diameter Throughout its length. Near the lower point of attachment of the vertical canals, and near the front point in the case of the horizontal canal there occurs a slight bulb or swelling. Each little swelling or ampulla contains rows of delicate hairs extending up into its cavity from the floor. Should the fluid in a semicircular canal move, for some reason, its current will bend or distort the hairs within its ampulla. The hairs are connected with the brain of the fish by means of the auditory nerve (or what compares with the nerve of hearing in man).

Within the sacculus, which is connected with the utriculus, and lies somewhat between it and the brain, there lies, in the case of the sheepshead, the “lucky stone. ” The stone is held in place by delicate strands of tissue, and is in contact with delicate hairs similar to those within the ampullae.

Let us see how the apparatus works. The lucky stone or otolith is merely acted upon by the force of gravity. When the fish tips to one side or the other, the otolith rocks slightly, stimulating the hairs which touch it. This portion of the ear seems simple in its function. The operation of the canals is a bit more difficult to explain.

Everyone knows that floating dust upon the surface of water in a dish tends to remain stationary if the dish is turned. The explanation lies here in the inertia of the water and in its low internal friction. Just as the water in the dish tends to remain stationary when the dish is turned, so the fluid within the semicircular canals of the ear tends to remain stationary when the fish turns from one side to the other, or changes his course in any way. That is where “the occasion arises.” The momentary current produced by the motions of the fish’s head results in the stimulation of the hairs of the ampullae. The different positions of the different canals will take care of all possible movements the fish may make as it swims.

If you have ever, as a child, “wind yourself up” in an old-fashioned rope swing, and then let yourself whirl to a stop, you have unknowingly demonstrated the function of the semicircular canals in your own ears. By the prolonged and rapid rotation as the swing unwound, you set into circulation the fluid within the canals. After you stopped rotating, the fluid kept circulating, with interesting sensations. To stop the sensations, a few quick rotations in the opposite direction are necessary. The reason is obvious.

From “lucky stones” to hearing, flying, or swinging. This started out as a recollection of boyhood interest and ended up with a touch of physics. The next time you find yourself picking up bits of shell and stone on the shores of the lake, look for lucky stones. They are fascinating in more ways than one,

This article first appeared in October 1947