When the Arnold Transit Co. was formed in 1878 by George T. Arnold and his partner L. B. Coats, their plan was to have a fleet of vessels to transport lumber in the Mackinac Island and Straits area. The best laid plans often have a way of changing and, before long, transporting passengers and other freight became their primary concern.

Down through the 133-year history of the Arnold Line there have been dozens of vessels in the fleet, from large passenger steamers to modern high-speed catamarans. For some reason, the company has had a penchant for naming its boats for Native American tribes. The Arnold Line has had two boats named Ottawa, two named Iroquois, one named Huron, one named Mohawk , and FOUR named Chippewa. In this article, we will take a closer look at four boats named Chippewa. 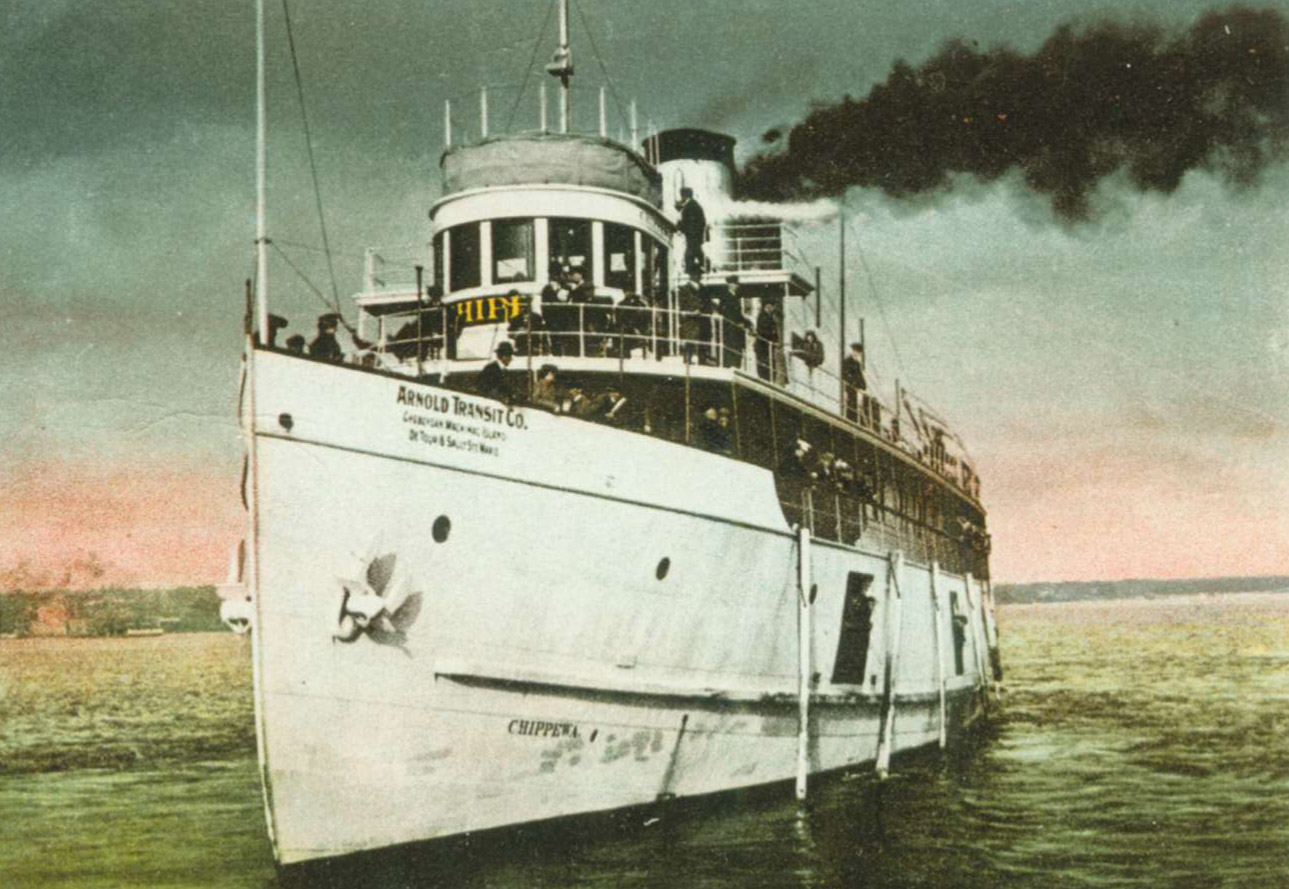 The First Chippewa. Photo from the author’s collection

The first Chippewa (U.S. 127440) was built as Hull 78 in 1900 by Craig Shipbuilding of Toledo. She was 200 feet x 34 feet 4 inches x 19 feet 8 inches. She was only 75% completed when she was side-launched on June 23, 1900. She made her maiden voyage to Mackinac Island less than a month later on July 7, 1900, and was placed in regular service from Cheboygan to Mackinac Island to Sault Ste. Marie and return. Craig Shipbuilding guaranteed she could run the St. Marys River in just five hours and she exceeded that goal, although she was not so successful in other areas of service.

This Chippewa was apparently too large for the route and in 1907, along with her slightly larger sister, Iroquois, she was sold to the Puget Sound Navigation Co. of Seattle, Washington. Both sisters went out the St. Lawrence River to the Atlantic, around Cape Horn and up the Pacific to their new home. In 1926, the Chippewa was rebuilt as an auto ferry and in 1932 her steam plant was replaced with a diesel engine. She continued sailing until 1964, when she was laid up until purchased to be used as a museum and restaurant. Sadly when she burned at Oakland, California, under mysterious circumstances in 1968, she was scrapped. 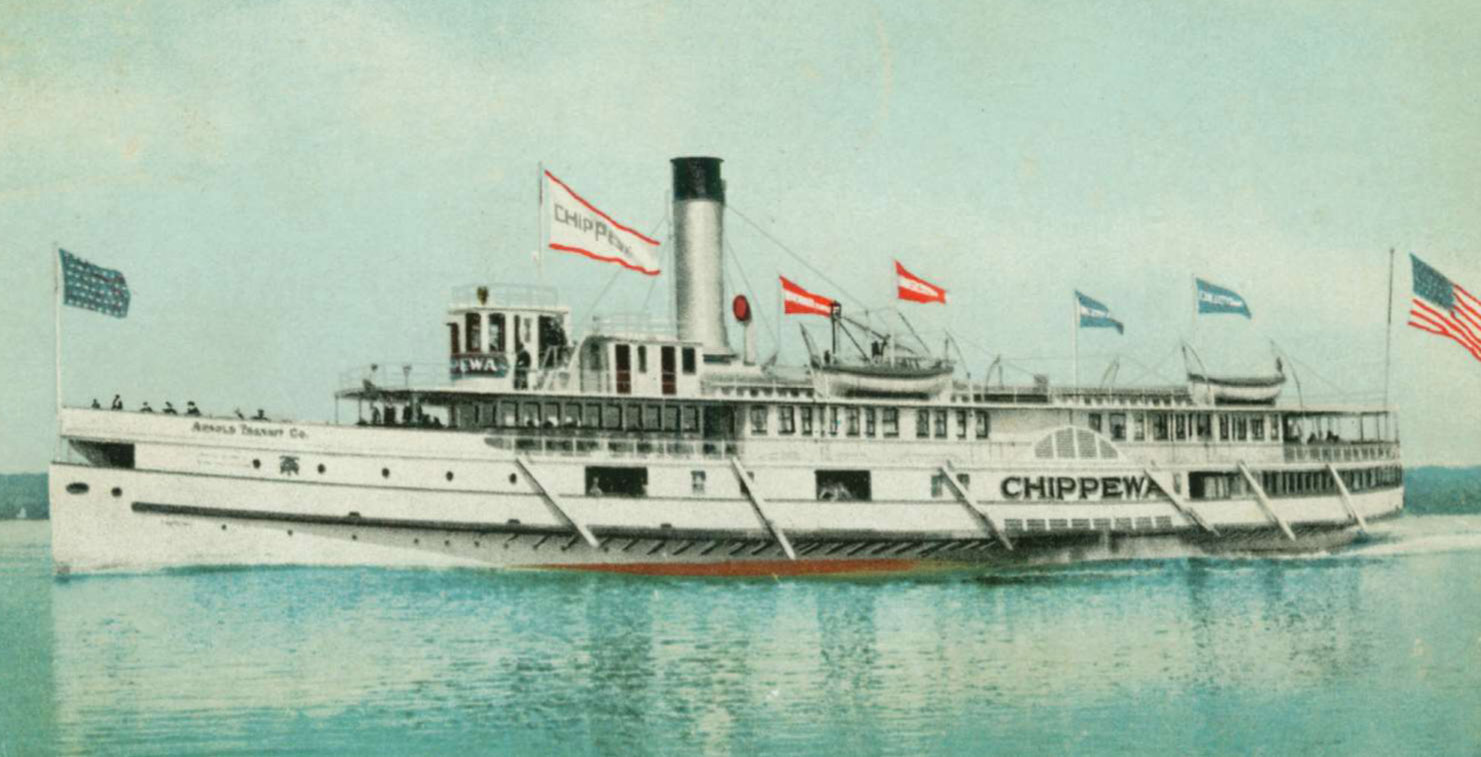 The Second Chippewa. Photo from the author’s collection.

In 1908, she was towed to the Craig Yard in Toledo where she was rebuilt into a fine-looking passenger steamer with new dimensions (181 feet 5 inches x 28 feet x 9 feet) and re-named Chippewa. She sailed for the Arnold Line in the Straits of Mackinac between Cheboygan, St. Ignace, Mackinac Island, Detour and Sault Ste. Marie. (Because of her speed, she also could cover the 100 miles to the Soo in just 5 hours.) She must have been successful in many ways, for just two years into her new career this second Chippewa was lengthened to 198 feet at Manitowoc.

She ran the same route as before until the fall of 1922, when she came to Lake Erie. After the Arrow (which had been running the route between Sandusky and the Lake Erie islands) burned, another passenger steamer was needed. The Chippewa filled the bill admirably. In addition to sailing from Sandusky to the Lake Erie islands, she sailed excursions to Detroit, Cleveland and Toledo, adding a few Canadian trips in her later years. In the autumn months she also carried cargos of grapes to Detroit.

Her last year in active service was 1938, and after serving as a barge for a few years, she was finally scrapped in Hamilton, Ontario, in 1943. 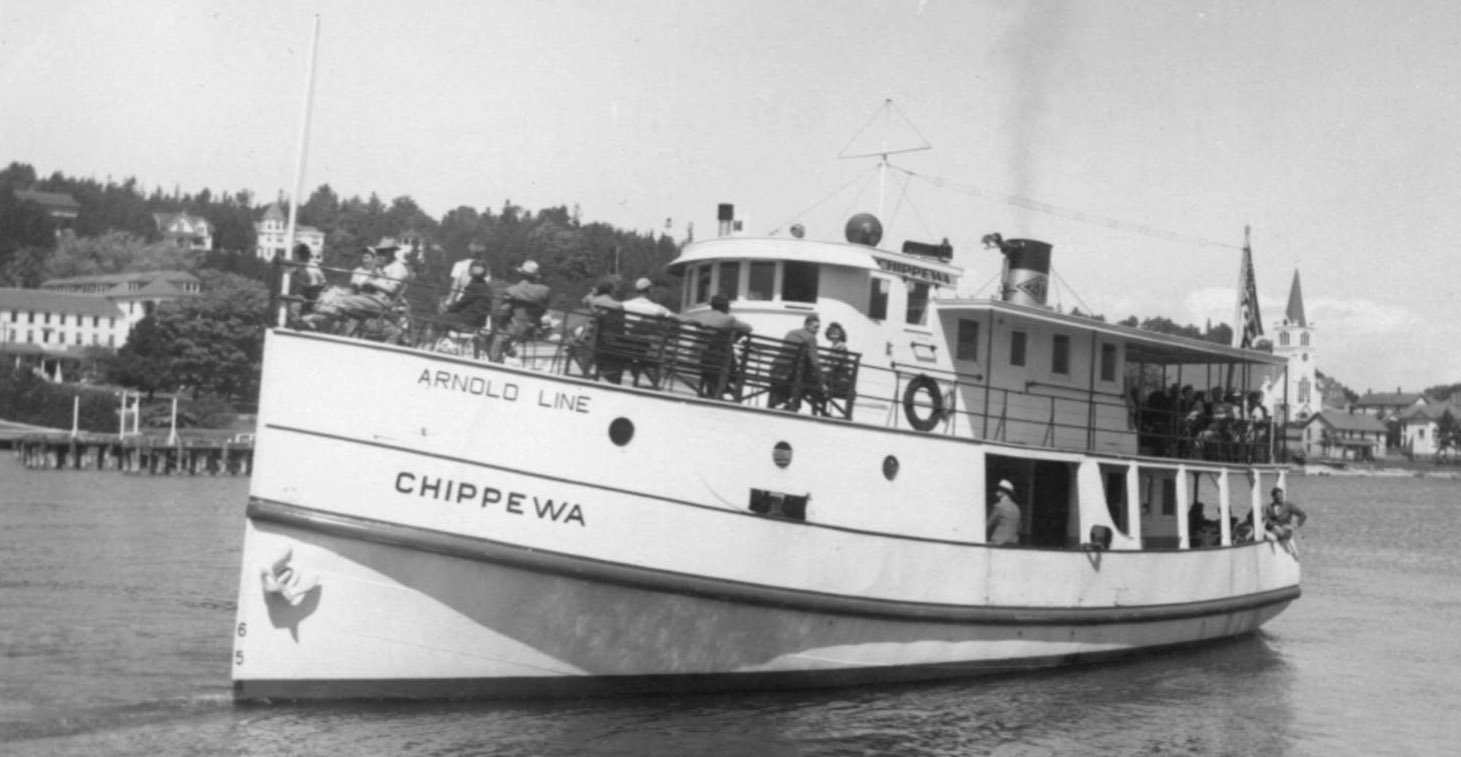 The third Chippewa. Photo from the author’s collection.

In 1936, she was sold to Hazel M. Allers of Charlevoix, then sold again in 1947 to Leroy Allers of Charlevoix. She came to the Arnold Line in 1948. After being converted to a passenger boat in 1950, she sailed for a number of years to and from Mackinac Island. She was sold in 1962 to Robert S. Weber of Bayfield, Wisconsin; to Apostle Islands Cruise Service of Bayfield in 1975; to Apostle Island Outfitters in 1978. She was sold off the Lakes in 1994, and continues to sail as the Chippewa for the Bay Taxi Service of Portland, Maine. 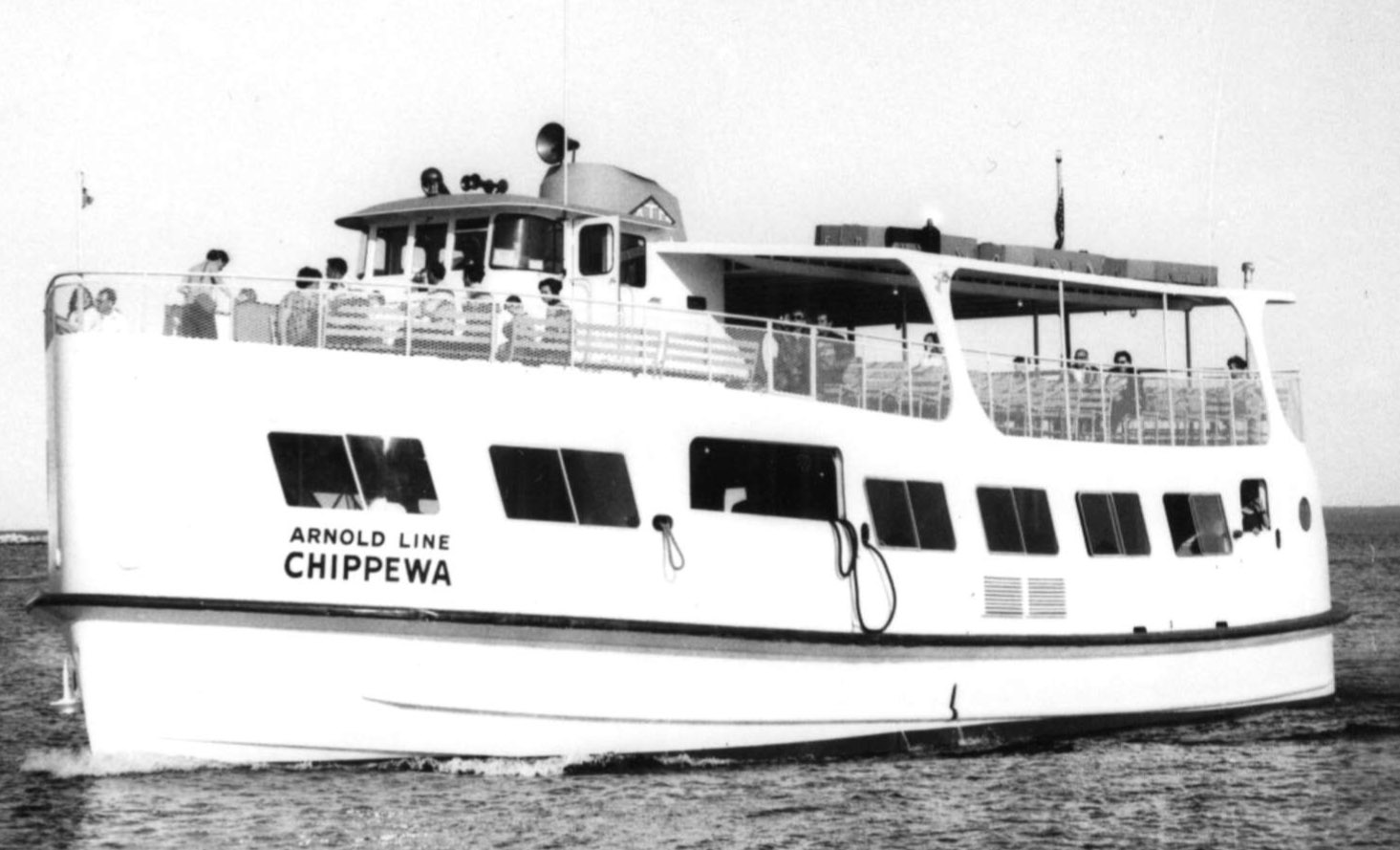 The Fourth Chippewa. Photo from the author’s collection.

The fourth Chippewa (U.S. 288825) in the Arnold fleet was built for the company in 1962 by Paasch Marine Service of Erie, Pennsylvania. Her dimensions were 72 feet x 31feet x 8 feet and 87 gross tons. She was lengthened by Paasch during the winter of 1968–1969 to 84 feet 4 inches x 29 feet 8 inches x 5 feet 2 inches and 81 gross tons. Although not as busy as the faster and more modern catamarans, the current Chippewa is still a part of the Arnold Transit Co. at this writing.

(Ed. note – The Arnold Transit Co. ceased operating as a passenger ferry company in 2016 and sold its boats to the Star Line Ferry)

About the Author: Al Hart is a Trustee of the Great Lakes Historical Society, serves as chair of the Society’s Publications Committee and is a photo editor for this journal. He is an avid collector of Great Lakes photographs and a self-proclaimed boatnerd. The photos featured in this article are from the Al Hart collection.