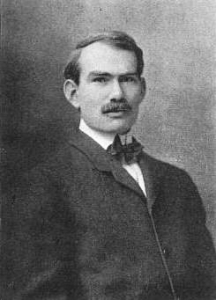 Within six months after Dr. Lee deForest had invented the first three-element vacuum tube, during the winter of 1906-7, he turned his attention to the development of wireless telephony, practically abandoning wireless telegraphy. His method of transmission was through the medium of an arc immersed in an alcohol flame. After a series of preliminary tests in his attic laboratory atop the Parker Building then located at the corner of Fourth Avenue and Nineteenth Street, New York City, two complete sending and receiving sets were made and shipped to Sandusky, Ohio, on the shores of Lake Erie.

Commodore W. R. Huntington of Elyria, Ohio, was president of The Sandusky Yacht Club and also the owner of a beautiful yacht, Thelma, so named after his only daughter. This club was sponsoring the Interstate Lake Regatta races scheduled to be held at Put-in-Bay nearby, during the week of July 15th to 20th, 1907. The plan evolved by Dr. deForest and Commodore Huntington was to equip the Thelma with this wireless telephone equipment and attempt to “talk via wireless” to a station ashore, reporting the progress of each race, and thus establish a two-way communication. A temporary, duplicate installation was established at Ladd’s Dock, at Put-in-Bay, manned by Frank E. Butler (Ex-associate Editor of Electronic Industries).

The Thelma was a trim little cruiser yacht with an overall length of 72 feet, with ten-foot eight-inch beam and five-foot draught. She carried two 20-horse power Lacy engines and was schooner-rigged, with a wooden hull. The aerial wires led through the roof of the wheel house to a small cross-arm on top of the foremast and thence parallel to a small arm on the main mast.

Ground connection was first made to the propeller shafts of the yacht’s twin screws, but this was found insufficient. In view of the fact that the hull of the Thelma was entirely of wood, deForest and Butler were at a loss to know how to obtain a good and satisfactory “ground” without which the wireless apparatus would not function. 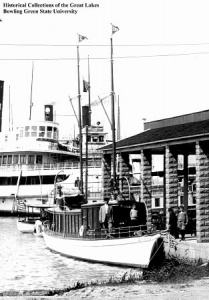 Without further ado the pair went uptown to a hardware store and bought two large sheets of copper and a supply of large-head nails which they brought back to the yacht and hid, awaiting the opportunity of nailing these sheets to the hull at such time when none of the crew or the owner of the yacht were present, since it seemed certain permission to do this on the mahogany hull would not be granted, if asked. A bright moon — and midnight — after all had gone home, provided the time for the two wireless men to go overboard and nail the plates to the hull below the water line. A slight wind caused a choppy beach wash, making the holding of the large metal sheets almost impossible to keep in place for nailing, but by daylight the job was finished.

DeForest and Butler were the Commodore’s guests, not only aboard his yacht, but at his hotel — The Beebe House at Put-in-Bay, which he also owned. His hospitality was overflowing and nothing was too good for his guests. He and his daughter took just pride in their beautiful yacht for it was a winner of trophies, but the success of this wireless test was paramount to all else.

The following morning when the Commodore appeared and beheld the ugly row of large nails driven into the hull of his boat, his jaw dropped in surprise as he also dropped to the deck the bundle he was carrying. He was stunned momentarily, but being the true sportsman that he was, instead of kicking deForest and Butler bodily from his yacht, he quickly gathered his composure and complimented them for their ingenuity and determination not to be stumped by any obstacle, merely remarking: “Holes can be calked up again. Paint and varnish are cheap.” 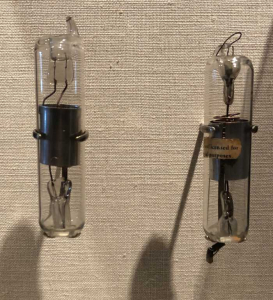 Vacuum tubes used on the THELMA, on display at the National Museum of the Great Lakes

Put-in-Bay is a landlocked harbor of only a few miles in diameter, with a narrow entrance, the shoreline of the bay forming a letter C. The yacht races were held outside the bay at some distance in Lake Erie. The racing course was a triangular one, measured to a seven mile stretch to each leg of the triangle. At each of the turning points of this triangle was stationed a “judge’s boat” where the time of passing of each racing yacht was noted and officially timed. It was planned that Dr. deForest, aboard the Thelma with the wireless telephone apparatus installed, would follow a wide circle, well outside the racing route and report to Butler by spoken word when each boat rounded a stake. Among those present for this occasion were several newspaper reporters including Frank Skeldon then representing The Toledo Bee (now the Toledo Blade— Mr. Skeldon being still employed on their editorial staff).

The exact words as received and recorded by Butler, as spoken and transmitted by deForest during the morning races of Friday, July 18th, 1907, are as follows:

The voice was then interspersed with a few strains of music on the gramophone from two records brought from the laboratory. Every few moments it was necessary for deForest to tap the casing of the old Blake transmitter to dislodge the carbon granules which quickly fused owing to the heat in the tertiary circuit of the voice circuit.

This article was printed in the Summer edition of Inland Seas.  It was reprinted there from Electronic Industries, August 1943