The importance of fire protection from the waterside became increasingly apparent in the major lake ports toward the end of the last century. Warehouses and other dockside structures had been hastily erected in an era that knew little about fireproof construction, and wooden wharves were burdened with piles of newly sawn lumber from the Upper Lakes. Some areas were hard to reach with vehicular fire extinguishing equipment and the number of available hydrants had been woefully inadequate to cope with major conflagrations.

Early Use of Tugs

The practical way to improve fire protection in the harbors was to equip small steam propelled vessels with high pressure steam pumps. Maximum maneuverability was essential for most effective action in confined harbor waters and since the tug type of hull with its large rudder area gave optimum flexibility, this hull type was adopted. While a tug is basically a towing vessel, this type of hull had inherent advantages which led to its universal adoption for services other than towing. Thus the misnomers ‘fish tug” and “fire tug” were popular designations of a distinct hull form, rather than a service title.

Harbor tugs have their towing bitts fitted well forward of the rudder stock to enable them to pivot freely while under the tension of a taut towline. This feature results in a long afterdeck which lends itself to the safe and proper handling of towlines. But the fire tug was not confined to towing requirements so the deckhouse was extended aft to accommodate the pumps.

Buffalo, Cleveland, Detroit, Milwaukee and Chicago have had elaborately equipped fire tugs for many decades and some of the smaller ports now have added fire protection from a high pressure nozzle mounted on the deckhouse of a local harbor tug with a suitable pump.

The first fire tug in Cleveland was the Joseph L. Weatherly, whose historical record is rather incomplete, but from data supplied by Captain M. J. Masterson of the Cleveland Fire Department we learn that she was built by Thomas Manning, at Cleveland in 1886, from plans and specifications developed by William Cowels, a prominent New York naval architect. She was named after the Volunteer Fire Department Chief who later became the first president of Cleveland’s Board of Trade. Two sets of plans were submitted, for either steel or wood construction. The dimensions for both were identical with one exception. The overall length for the wooden hull was 79 feet exclusive of sheer, which was one foot longer than the designed length for a steel hull, the difference probably being due to the larger stern in a wooden hull.

The Excelsior Iron Works built the engine and Clapp & Jones had won the pump contract on their bid of $6,865.00. This contract was subsequently cancelled when Thomas Manning, Jr., and Company bid $5,940.00.

Lieutenant C. Anthony of Hook and Ladder Company No. 2 was appointed supervising inspector and the vessel was launched at 3:00 P. M. on August 4th, 1886. On trial trip from Cleveland Harbor Light to Rocky River, the Weatherly steamed seven miles in 41 minutes, which was a credit to her builders, and her master, Captain Moffett, her engineer, Thomas Mooney, and mate, C. C. Campbell, who held a Fire Department rating of lieutenant. Some green timber seems to have found its way into her hull because extensive dry rot was discovered after a few years and she was condemned in 1894.

The Clevelander and the John H. Farley 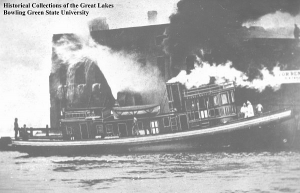 Her successor, the Clevelander, was also built in Cleveland by Thomas Manning, and commissioned on June 1, 1894. She cost $33,000.00 and was a most imposing vessel with a large rounded front pilothouse and a pleasing sheer. The hull was painted black, the deckhouse was red and all hose connections and deck fittings were polished brass. 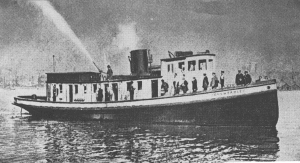 Due to the frequency and intensity of fires in the lumber yards and oil refineries along the Cuyahoga River in Cleveland, it was deemed advisable to have two fire tugs. The second vessel, named the John H. Farley, was slightly smaller than the Clevelander but she was also a very symmetrical and capable little ship. The Farley was built by the Union Engineering Company in Buffalo and commissioned January 11, 1895. Her high pressure non-condensing engine was built by the Thomas Manning Company and her fire pumps were those of the dismantled Weatherly.

In 1916 the Clevelander was retired from service and towed to Manitowoc by the wooden freighter Roumania. In the Manitowoc shipyard the Clevelander’s main engine and pumps were transferred to a new vessel and her hull was burned.

The George A. Wallace 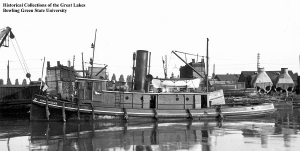 The successor to the Clevelander was named the George A. Wallace in honor of the Cleveland Fire Chief, and commissioned July 18, 1916. She was constructed of steel, had an overall length of 86 feet 6 inches, a beam of 20 feet 6 inches and her draft was 11 feet 6 inches. Gross tonnage was 112; net 72. Her pumping capacity was 4,000 G. P. M.

These two able fire fighting ships protected the Cleveland waterfront from fire losses until September 5, 1936, when they were sold to H. J. Dixon in Toronto. The Farley was converted for towing and steamed east to Montreal where she was engaged as a harbor tug.

The venerable Wallace was rebuilt by the Toronto Dry Dock Company who dealt kindly with her, keeping her name and certain embellishments out of pure sentiment. For instance, the galloping white horse remained on her red pilothouse door, and fire axes and holders were retained wherever possible. She ultimately entered the colorful but rugged career of an icebreaker in Halifax.

During World War II, the United States Coast Guard provided fire protection to Cleveland shipyards and other defense industries with a 64 foot converted steel fishing vessel CG64022 -F. This craft was purchased by the city in 1945 and is still in service as the Marvet.

A new Clevelander was built by the Paasch shipyard in Erie in 1954. This is a diesel powered craft with a pumping capacity of 6,000 G. P. M. Upon completion of a new fire tug now on the stocks in Erie, the Marvet will be retired. Thus two diesel powered fire boats now serve the port of Cleveland but, in conformity with the modern trend, they are strictly and austerely functional and entirely devoid of the character and personality of their predecessors.

Other venerable fire tugs which earned well deserved recognition were the W. S. Grattan (re-named Firefighter and now the Edward M. Cotter) and the George R. Potter in Buffalo, the James R. Elliott and James Battle in Detroit and the Illinois, Joseph Medill and Graeme Stewart in Chicago.

The sight of a fire tug in action during a roaring night fire was truly inspiring as the pilothouse windows and the brass fittings reflected the glow of the flames. Black smoke unfolding from the stack, blended with the white exhaust steam that shrouded the vessel in an eerie sheen of unreality. The pumping position was usually head-on to the fire with a slowly turning propeller to offset the thrust of the high pressure nozzles which had a tendency to push the vessel astern. The hiss and thud of water thrown against burning timbers and the pulsating exhaust of the steam pumps gave very impressive tones to an exciting and unforgettable scene.

When the fire was out, and all danger had been allayed, the fire tug returned to her station where she gently nudged her dock and patiently awaited the next urgent call to duty. Here her decks were swabbed and she was polished and groomed while the slowly escaping steam whispered a sibilant lullaby to a true “Sleeping Giant.”