Abigail Becker had not been endowed with great strength and agility of body as well as with a most courageous spirit, she could never have performed the heroic feats of life saving which she did, on the shore of Lake Erie in late November, 1854.

With her husband and children, this woman lived at that time on the east side of Long Point, Lake Erie, about three or four miles from the mainland. This long isthmus of low-lying land reaches out from the Canadian shore nearly twenty miles to the south-east, and near its terminal stood then the tall wooden lighthouse, erected in 1843, which cast its friendly ray on the Becker home as well as far out over the lake to guide vessels on their way.

Mother Becker was a real pioneer of the shore. Her home was a weather-beaten cottage built of logs and driftwood; her nearest neighbors were many miles away; while Port Rowan was far to the east. She shared with her husband many of the duties of making a precarious living, in fishing, trapping, beach-combing, and gardening. Standing hearty and strong, six feet tall in her bare feet (for she seldom had shoes to wear) she could delve in the soil, hunt for game, fish in the waters, row, swim, or dive, as she might have need or pleasure. 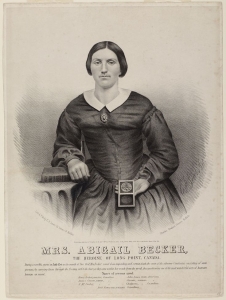 On that stormy night of November 24, 1854, Abigail slept alone with her children in their little home by the shore. The father had not returned from Port Rowan where he had gone for supplies and remained over-night storm stayed. Snow had come too with the storm, dimming out the Long Point light; and the waves could be heard lashing loudly on the beach.

At the first glimmer of dawn the anxious mother arose to tend to her household. She lighted a fire on the hearth, and then with bucket in hand went down to the shore to draw water. On looking up she noticed to her surprise an upturned yawl-boat by the shore, driven in during the night.

“Some ship has been wrecked in the storm,” she said to herself. Then on looking out on the bay, the truth of her remark became evident, for there about a half mile from where she stood was a wrecked schooner sunk on a sandbar with its decks awash and its masts and tattered sails swaying in the wind. On closer inspection she could see several men lodged in the rigging, hanging on as the masts swung back and forth in the gale.

“Something must be done,” she said, “to save those poor sailors from drowning or from freezing to death.”

Sped Mother Becker,  ‘Children, wake;
A ship’s gone down, they’re needing me;
Your father’s off on shore; the lake
Is just a raging sea’  *

Abigail then went down the shore opposite to the wreck, and waved her arms to the marooned sailors to show them that she saw them. They waved back to show that they understood.

“Courage! Courage!” she called to them through her trumpeted hands; “hang on, and I’ll try to get you help.”

The woman then examined the yawl-boat to see if it could be used, but found on turning it over that one side was staved in, rendering it useless. She looked along the mainland to the east to see if her husband might be returning with the boat, but there was no sight of him. She thought of seeking help from the lighthouse, but she knew that meant a journey of fourteen miles. She was alone, and could see no way of saving the men.

However, with the sense and instinct of a pioneer of the shore, the good woman hauled some logs and branches together on the beach and lighted a fire. This was to encourage the men and provide warmth for them in case they could get ashore. She thought of making a raft to aid in the rescue but there was little at hand with which to construct it. She then walked up and down the shore hoping the storm would ease and that perhaps some help might come from somewhere.

On viewing the sailors in the rigging, she was glad to note they had on their great coats giving some protection from the wind and cold.

“Keep up your courage; hang on; hang on;” she shouted many times to the poor unfortunates. “Help will come yet, the storm may go down.”

Noon came; two o’clock came; four o’clock; evening was fast approaching; the wind had lessened some, but no help had arrived. “They cannot live another night on that ship,” the woman said to herself, “they will all be dead by morning. Their only chance for life is for them to try to swim for shore. ”

It was a long distance to swim; the water was cold; the waves were still strong; only powerful swimmers could hope to come through.

At last one of the men could be seen sliding down the mast and standing on a timber. Then he shed his heavy coat and leaped into the water aiming for shore. He made headway, slowly, little by little; the head could be seen bobbing up and down, sometimes out of sight; sometimes a wave went right over him.

Abigail on shore anxiously watched the brave man.  “Come on; come on;” she called often to him, “keep going; don’t give up; I’ll help you land; keep going!”

Just as the swimmer was about to touch shore the undertow suddenly swept him back into the deeper water; his strength was spent, and he sank. The waiting woman then leaped out into the water, grabbed the helpless man round the body and carried him ashore, alive and safe. She placed him by the fire; put warm blankets about him and gave him hot tea which she had ready in the big tin-pot. The man soon revived and could talk a little.

“Are you the Captain?” the woman asked.

“Yes, Robert Hackett, once of the Hebrides; my schooner the Conductor loaded with grain for Buffalo sank on the sand bar there. In the snow storm we couldn’t see the Long Point light; we struck first near the outer point, drifted helpless and lodged there where you see us.”

“There are five sailors and my mate Jerome, there in the rigging. I told the mate if I got through for him to come next, but if I didn’t for them all to stay there for the night.”

The stalwart mariner then stood up and waved to his comrades, “Come on, Jerome, come on; you try it first, while there is still light.” The message seemed to reach, for soon mate Jerome took off his long coat and slid into the water. “He’s a good swimmer,” said Hackett, “I think he can make it.”

The two watched the slowly moving figure making headway little by little. Sometimes he was washed back, and for a time it seemed as if he had given up; but he kept on. At last he reached the undertow area.

“I will help him make shore,” said the Captain, and thrusting back the woman, he leaped in to save his struggling mate. But in an instant both men went under out of sight.

It was then our brave woman acted her part. Unafraid and unhesitating she dived into the maelstrom to seek the two drowning men.

She sought the men, she sought them far,
Three fathoms down she gripped them tight,
With both together up the bar
She staggered into sight.

The powerful able woman hauled the two helpless figures out of the surf, bringing them safely on shore; then helped them to the fire to revive and get warm. This brave Amazon of the lakeshore had matched her strength against the raging elements and had won.

As the other men on the ship saw that their officers had made shore, they too made ready to swim. Through the gathering darkness but with lessening wind, the men made headway through the water. As each one came in, Abigail went out a piece in the water to meet him. And soon all seven mariners were safe on land.

The good woman next helped the rescued ones into her little home where food was given them. All gave thanks to God for their delivery from the jaws of death.

Two days later the revived mariners left to go to the lighthouse to be picked up by a passing vessel.

“May God keep you and bless you,” they said in farewell, “to you, the Guardian Angel of Long Point Bay, we owe our lives.”

“I have done nothing more than my duty.” was Abigail’s humble reply.

The noble deeds of Abigail Becker, in saving the lives of the crew of the schooner Conductor at that isolated part of Lake Erie’s shore, would have perhaps passed unknown to the outside world, had it not been that a certain benevolent gentleman passed that way soon after. This was Captain E. P. Dorr of Buffalo, New York, who came to the Long Point lighthouse seeking information of his lost ship. There he learned from the keepers the story of Mother Becker’s saving the crew of the Conductor.

So on his way back the visitor called at the Becker cottage to learn further of this wonderful rescue of the men. The captain was so impressed with the worthiness of the good woman and the humble part she ascribed to herself in the life saving that he determined her good deeds should not pass unrecognized.

Noting the poverty of the home and the entire absence of shoes to wear, he measured the feet of the mother and children, and departed. Some weeks later a great box of clothes and shoes arrived at the Becker home; and in a special wrapping there was a beautiful Bible inscribed in letters of gold:

But not content with this kindly act, the Captain did still more. A few weeks after that, Mrs. Becker and her eldest daughter were brought to Buffalo for further honors. At the American Hotel with the aid of the proprietor, Mr. Hedge, a dinner was given by the Seamen’s Union in honor of this Canadian life saver of Long Point. A purse of one thousand dollars in gold was presented to her and also a life-saving medal by the Life Saving Association of New York. (This honor was given by this Association because of Mate Jerome and one sailor of the Conductor being Americans.) May we note with satisfaction the great bond of sympathy and fellowship that united the brotherhood of the two shores of the international Great Lakes of North America. 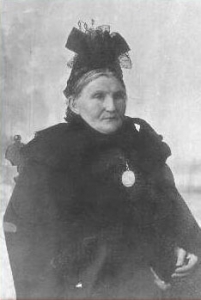 Canada also helped in paying tribute to our heroine. That winter before the Canadian Parliament then meeting at Quebec City, a member read to the assembly a newspaper item telling of the honors done to Abigail Becker in Buffalo. A motion was passed by which a hundred-acre farm in Norfolk County near Long Point was given to the woman in recognition of her noble work of life saving.

Abigail Becker lived to old age, with her second husband Henry Rohrer, on the farm she had been given and in the house bought with part of the purse of gold. And when the good woman died in 1905 this Grace Darling of Lake Erie was honored with a civic funeral. Her portrait hangs today in the Abigail Becker Ward of Simcoe Town Hospital, with her lifesaving medal on her breast and Captain Dorr’s gift Bible resting on her lap.

The story of Abigail Becker’s life is told in a booklet by her daughter Eleanor Rohrer; the tale of her life saving was written for the Atlantic Monthly by John G. Whittier; and the spirited poem descriptive of the event by Amanda T. Jones is contained in several collections of American poetry in our libraries.